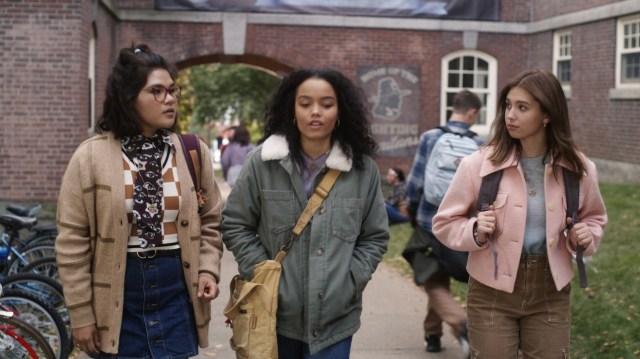 The hour is nigh for the return of the Sanderson Sisters as Hocus Pocus 2 gears up for an spellbinding release on Disney Plus. It’s been almost 30 sickening years since the original movie swept audiences off their broomsticks in 1993, and while trepidation – and expectation – is high for the long-awaited sequel, actor Doug Jones, who plays Winifred’s long-dead ex-boyfriend Billy Butcherson, is here to assure fans the nostalgia is still very much alive in the sequel.

In speaking with Entertainment Weekly, Butcherson along with the movie’s director Anne Fletcher and stars, Bette Midler, Sarah Jessica Parker, and Kathy Najimy, addressed the elephant in the room: the 21st century. To be sure, a movie that took place before cell phones ruined plot and social media dominated the conversation will experience a fair amount of strain in trying to incorporate such things, but Butcherson maintains that the modern touches in Hocus Pocus 2 offer a little bit of something for everyone.

“It is seamless between the first movie and the second, that’s the first thing I felt. It keeps the pureness and nostalgia alive and well for those who grew up with the first movie, and for any new fans we’re gathering now will be excited about modernization for the current time we’re in.”

The safest option for the movie is to incorporate said modernization delicately: a phone call here, a text message there. It’s best to steer clear of social media and Facetime, unless done so in a way that pokes fun of the Sanderson Sisters’ obliviousness, which could actually be hysterical. The official trailer showed Najimy’s Mary riding what appears to be a pair of Roombas instead of a broom. That right there is gold.

Dashes of nostalgia will also include major musical numbers, according to Sarah Jessica Parker, which Midler hopes will “fall into the category of equivalent [to “I Put a Spell on You.”] Additionally, our three new teenagers Becca (Whitney Peak), Izzy (Belissa Escobedo), and Cassie (Lilia Buckingham) we bring us back to the Sanderson Sisters’ original cottage where Max lit the black flame candle, except this time the cottage has been turned into a tourist magical shop.

If all things go according to plan and audiences take to this modern sequel, we may just see a threequel in the future. At least, Bette Midler hopes so. Halloween lovers can fall under Hocus Pocus 2‘s spell on Sept. 30 when it premieres on Disney Plus.