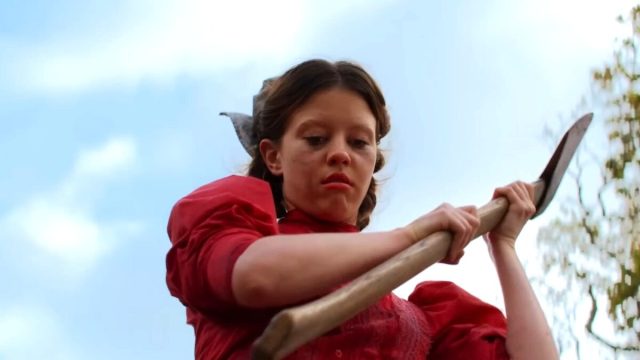 The first trailer for Ti West’s new horror slasher film Pearl has been released. Pearl is slated to arrive in theaters on September 16, 2022, and it serves as a prequel to Ti West’s last horror film, X, which was released in March 2022. But how is it a prequel, and why does Mia Goth play the lead character in both films?

X was the story of an adult film crew who travel to an old couple’s farmhouse to shoot a pornographic film while trying to hide it from them. Mia Goth plays Maxine Minx, a pornographic actress who wants to be a star. Minx is the film’s protagonist as well as the final girl. She also plays the old woman on the farm, Pearl. The film also starred Jenna Ortega, Brittany Snow, Scott Mescudi, Martin Henderson, Owen Campbell, and Stephen Ure.

Events take a turn in the film when Pearl and her husband Howard pick off the film crew one by one until Maxine manages to escape. Hints about Pearl’s past are scattered throughout X when she reminisces about her youth, and we are presented with the notion that these people might not have been her first victims. Pearl also attempts to sleep with Maxine in the film, which is made weirder when you consider that they were both played by Goth.

During the filming of X, Mia Goth, collaborating with Ti West, came up with the backstory for Pearl, Goth’s character. The backstory proved to be deep enough to warrant its own movie, which they shot right after X. So Pearl will serve as a prequel to X and tell the story of Pearl as a young woman, living on the farm and wanting more for her life.

Pearl will be played again by Mia Goth, who will not have to endure the hours of old-age makeup she wore for X. The prequel will be set during World War 1, and according to the trailer will feature just as much blood and guts as the first film, if not more. Pearl will also star Tandi Wright, Matthew Sunderland, Emma Jenkins-Purro, and David Corenswet as Howard, a younger version of Pearl’s husband in X.

Judging by the trailer of Pearl, it seems like the film might even be better than X. Ti West usually provides audiences with a good time so it should be no different when Pearl hits theaters on September 16, 2022.