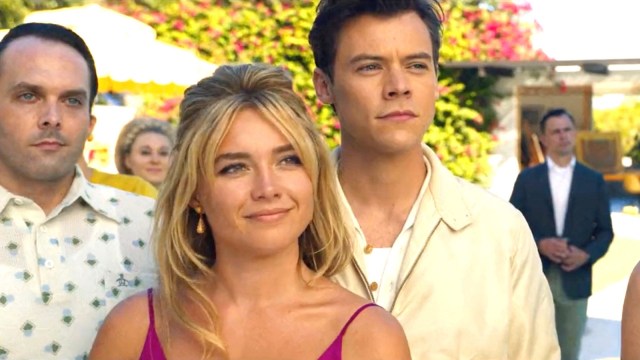 Behind-the-scenes drama aside, Don’t Worry Darling really seemed like it could’ve been a benchmark theatrical release for 2022 based on the early previews. Olivia Wilde’s sophomore effort as a director had the vibe of a darker spin on The Truman Show-type premise in the earliest trailers, with headlining actor Florence Pugh trapped inside an idyllic-seeming 1950s community that appears to hold a dark secret.

However, when the film was released, it ended up garnering a disappointing critical score of 38 percent on the review aggregate site Rotten Tomatoes. We’re not trying to say there’s nothing redeemable about Don’t Worry Darling. In We Got This Covered’s review of the film by Tricia Gilbride, she gave the movie a “fair” rating, overall, owing to Pugh’s strong performance and Wilde’s bold directorial choices, although she noted, “the story feels uneven.”

Even though the movie fared better with audiences, landing a 74 percent audience score on RT and proving a popular streaming title on HBO Max, we do wonder if the film would have resonated better with critics if that twist ending was altered from what we got.

Going into Don’t Worry Darling, this writer was immediately worried the twist ending would be something akin to the “it’s all taking place in modern times” ending that kept M. Night Shyamalan’s The Village from reaching its full potential back in 2004. Such a trope is similar to the “it was all a dream” stereotype of twist endings in that it is very hard to come across as fresh and original using the plot point.

It turns out, the ‘50s community of Victory, California, really does take place in modern times, with Pugh’s housewife character Alice actually being coerced into participating in a virtual reality program against her will. In real life, Pugh’s character is actually a doctor in modern times, but her resentful boyfriend — played by Harry Styles — volunteers the couple (without her consent) for transporting their consciousnesses into the ‘50s-like simulation so that he can be the breadwinner and she assumes the role of a loyal housewife.

Throughout the film, Pugh experiences frightening and inexplicable visions which the twist would imply are simply glitches in the VR program. Could there have been a better twist done so that the general spirit of the film is preserved, but without a cop-out ending?

In this writer’s opinion, the movie would’ve been better if they’d kept the setting in the ‘50s. For instance, the twist could have been that Chris Pine’s Frank — who is the Jordan Peterson-like leader of the experimental Victory community — is secretly a contractor for the CIA and has been covertly dosing community members in Victory with LSD, or some other experimental drug, as part of the MK-Ultra program. Hence, both the euphoric/utopian moments in the film and the hallucinogenic nightmares Alice experiences could be explained by being dosed by the psychotropic drug. Plus, characters in the movie are constantly drinking booze and food provided by the people who run Victory, so those consumables could’ve easily been laced with LSD. This would make the film a kind of combination of a psychedelic horror movie and cult thriller, with Alice single-handedly unraveling the conspiracy. This would make the movie’s parallels to modern times more metaphorical, rather than being so on the nose.

The MK-Ultra program was a real thing that happened, in which the CIA secretly dosed people with LSD for the purposes of seeing if they could control human behavior as part of the Cold War against the Soviet Union. The illicit program lasted from 1953 until 1973, but details about the program only went public in 1975, according to History (a sci-fi take on the MK-Ultra program is also a plot point for Netflix’s flagship series, Stranger Things). This would obviously be a fictionalized take on it and combining that history with the unrealized blueprints for a utopian community that was tentatively planned by Walt Disney — some ideas for which were incorporated into the theme park EPCOT, which stands for Experimental Prototype Community of Tomorrow, according to Insider. Plus the cult community known as the Rajneesh movement, who set up a commune in 1980s Oregon, were known to dose community members who were having behavioral problems via spiking their complimentary beer with drugs, according to the Netflix documentary miniseries Wild Wild Country, so there’s definitely a history of cults doing stuff like this in real life.