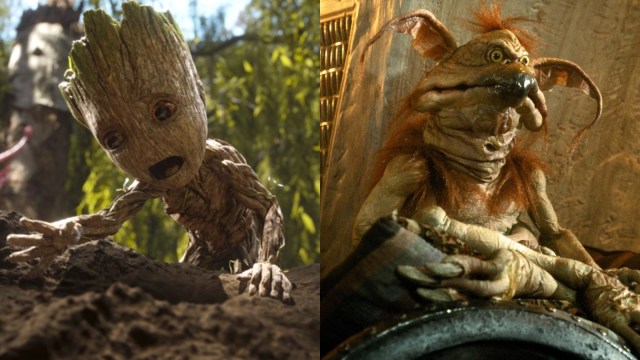 I am Groot has given the Marvel Cinematic Universe a new, cute angle on the Guardians of the Galaxy favorite, and the showrunners have opened up on other cute things from the series, including a big Star Wars reference.

The series is almost entirely unrelated to the canon of the sprawling MCU, but that hasn’t stopped it from appearing on Disney Plus. With it a fittingly small-scaled show, it isn’t beleaguered by its greater universe, instead opting for its own charming ideas.

Speaking to Variety, director and writer Kirsten Lepore and Marvel’s head of streaming Brad Winderbaum spilled the beans on some of its new entries. In particular, the creature design was something they were very big on developing, with one based on Jabba the Hutt’s strange monkey friend Salacious Crumb. Lepore says she found the creatures “super fun” to develop.

Those were all super fun to develop. The little tiny blue creatures are called Grunds, and those are really near and dear to my heart because they’re just my natural design sense, where they’re super simplistic. Two dot eyes and a mouth, basically, and very cute and expressive even though they’re very simple. So those were a lot of fun to design.

“The watery shapeshifting character’s name is Ewa, and then we created this squirrel-like character named Snoot Pin Bongo. He was very inspired by Salacious Crumb from Star Wars. And I loved how annoying and over the top he was.”

How about that Bonsai tree creature that squares up to baby Groot? Unfortunately, it is unnamed, but for now, we’ll call it Glup Shitto. Or as Lepore calls it for now, “Groot 2”.

Yeah, that’s also a character, good call. We did not give the bonsai an actual character name, but now we might have to come up with something. “Groot 2,” maybe.

All of I am Groot is available to stream on Disney Plus, with an older version of Groot set to return for the upcoming Guardians of the Galaxy Holiday Special later in 2022.