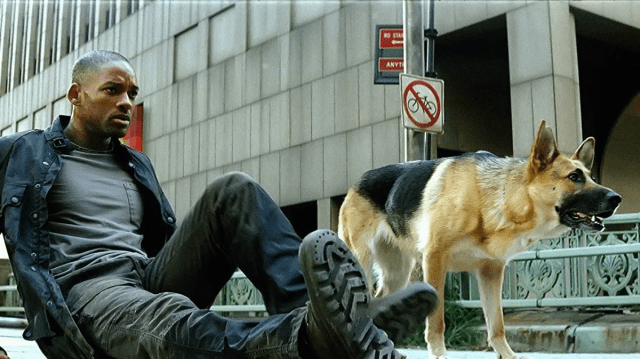 Early this year, we found out which of I Am Legend‘s two endings was the canon one. While it’s safe to say that neither ending holds a candle to the conclusion of its source material (the 1954 novel of the same name by Richard Matheson), the news that Will Smith would be reprising his role as Robert Neville for a confirmed sequel means that the special edition DVD ending will likely be the event that the sequel will be following; an infinitely welcoming development for the artistically-inclined.

In the theatrical release, I Am Legend saw Neville sacrifice himself blockbuster-style to ensure that a cure for the Darkseekers’ infection would be protected, indicating that the days of the apocalypse were finally numbered. This contrasts with the alternate ending in the two-disc special edition DVD release, where Neville hands over his test subject to an alpha member of the Darkseekers, who turns out to be his subject’s mate. As the pack of Darkseekers reluctantly let him live, Neville realizes that he’s a monster in the eyes of the Darkseekers, and agrees to seek refuge in the survivors’ camp. This ending, sadly a much less-viewed one, is much closer to the ethos that Matheson’s book became so beloved for.

It’s a shame for Francis Lawrence, the director of the 2007 film, who was allegedly forced to go with the theatrical ending after receiving poor test screening feedback from audiences when they viewed the more faithful alternate ending. Nevertheless, he remains undeterred and spoke with ComicBook.com about his hopes to be brought back on for the sequel, despite his involvement not being official just yet.

I have spoken to Akiva [Goldsman] a little bit about it, but I think that is still aways away. I’d love to do it. I’ve heard some things about I Am Legend. We actually don’t have much, just brainstorming things for Constantine, but I’m sworn to secrecy on I Am Legend.

It’s hard to say when we’ll be getting news on the I Am Legend sequel’s production timeline, and it will be equally hard to guess if audience feedback will make this entry worse, too. Here’s hoping we’ll have reached the end of artistic compromise in the cinema by the time we have word on a release date.