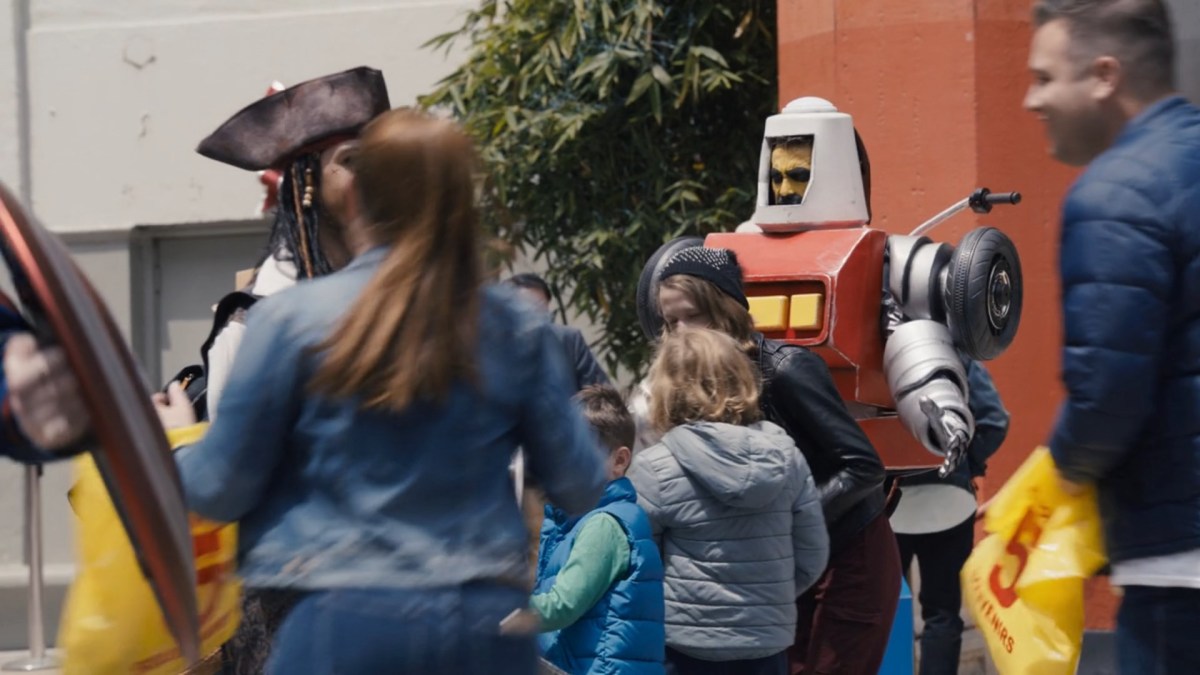 What is and isn’t canon within the MCU can be tricky to deduce, especially when the franchise references real-world events, products, and concepts. The Guardians of the Galaxy Holiday Special raises an interesting question about a famous collection of giant robots and if they’re canon to the Marvel universe.

How did The Guardians of the Galaxy Holiday Special make the Go-Bots canon?

In The Holiday Special, Drax and Mantis end up on Earth in their quest to find Peter Quill the ultimate holiday gift to make up for some not-so-great childhood Christmas seasons.

While on Earth, the pair visit the TCL Chinese Theater, a location well-known for the swathe of costumed people who hang around it. During this trip, they encounter someone dressed up as Cy-Kill, one of the Go-Bots. Drax gets aggressive with him, but Mantis stops him, excusing his behavior by saying, “GoBots killed his cousin.”

Then, James Gunn posted an image of the original Cy-Kill alongside the costume seen in The Holiday Special. He captioned the picture “Canon,” making the connection official in the eyes of many fans.

Does this mean Transformers is canon within the MCU?

This has led to fans debating if The Transformers are canon within the MCU because of the two franchises’ strange history with one another.

Go-Bots were made by Tonka, with the first toys hitting shelves in 1983. Tonka had not actually designed these toys. Instead, the line was based on a series of toys made by the Japanese company, Popy, with Popy’s toys being sold as part of a line called Machine Robo. In 1984, Hasbro launched Transformers. Like Go-Bots, they started life as a toy line using molds purchased from Japanese company Takara, who had made them for their Diaclone and Micro Change toy collections.

As both toy lines were similar, they ended up in direct competition, one that Transformers eventually won out. In 1991, Hasbro brought out Tonka, gaining the license to Go-Bots in the process. In future Transformers media, the Go-Bots world was said to be an alternative universe within the Transformers multiverse.

If Go-Bots are MCU canon, then, via the transitive property, Transformers must be canon as well, as the franchises are connected via a shared universe. This is oddly fitting, considering The Holiday Special features Kevin Bacon, a man known for linking up otherwise disparate celebrities.

It should be noted this is not the only time Marvel and Transformers have crossed over. Between 1984 and 1994, Marvel published a line of Transformers comics, which were known for deviating heavily from the original cartoon. It also featured some cameo appearances by Marvel heroes, most notably Spider-Man, who appeared in the third issue.

In 2006, Marvel released the All-New Official Handbook of the Marvel Universe A–Z, an encyclopedia detailing various Marvel characters and their histories. This book notes that the Transformers comics, and thus every Marvel crossover with them, takes place on Earth-120185. Rather than the mainline Marvel universe.

According to writer Stuart Moore, this crossover occurs in the mainstream Marvel universe. In an interview with ComicNewsi, he said:

“It’s pre-Civil War; the story is set, in Marvel continuity, between the first and second story arcs of New Avengers. The core team is Captain America, Iron Man, Spider-Man, Cage, and Wolverine…with Falcon and Ms. Marvel flying in to help out against the aerial Decepticons.”

However, until Marvel confirms this one way or the other, we’ll likely never know if the Transformers are canon within the MCU or if this was just James Gunn referencing one of his favorite childhood toys. However, as Paramount owns the Transformers’ movie rights, don’t expect an official answer soon.