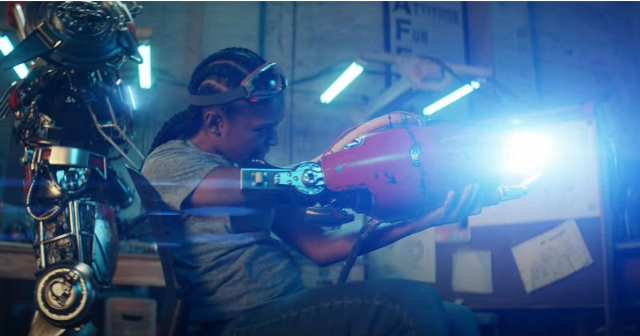 No one can deny the sheer talent present in the fantastic cast of the Marvel Cinematic Universe. For a young actress like 25 year-old Dominique Thorne, who has just made her MCU debut in Black Panther: Wakanda Forever as the genius Riri Williams, AKA Ironheart, there could not be a better school.

The actress spoke to Screen Rant about her experience on the set of the Black Panther sequel, and what working alongside the veteran Marvel cast has taught her about her craft.

There was one castmate who made quite the impression on Thorne, in the way she carries herself both on and off screen, and stands up for her character. Danai Gurira, who plays Dora Milaje general Okoye, “has such clarity about [her], as does the Queen of Wakanda and the royal family, in defining her character,” Thorne said.

That was the most valuable lesson the cast of Wakanda Forever, and especially Gurira, taught the Marvel debutante.

“I’d say that the cast on the show really did such a great job of just really walking in their excellence and understanding that their first responsibility was to their character.”

In the original quote, surely the result of a momentary lapse by either Thorne or Screen Rant, the Wakanda Forever actress actually used the word “show” instead of “movie”, which could lead to speculation about whether she just spilled some major beans about upcoming Disney Plus show Ironheart.

While we don’t think that’s the case, given Marvel’s tight grip spoiler policy, Danai Gurira making an appearance in Thorne’s standalone show would not only be incredibly cool, but also relatively possible. Apart from Letitia Wright’s Shuri, Okoye was the character that shared the most amount of screen time with Riri in the 2022 film, and Black Panther and Black Panther: Wakanda Forever director and co-writer Ryan Coogler is also executive producing Ironheart. One can dream.

Whether in her show, or in her movie, the truth of the matter is that Thorne has nothing but words of admiration for her cast. The actress stated that learning to “not [be] afraid to ask questions or to question certain things that didn’t sit right with them because they know the characters best” was “a beautiful lesson” from her Wakanda Forever family.