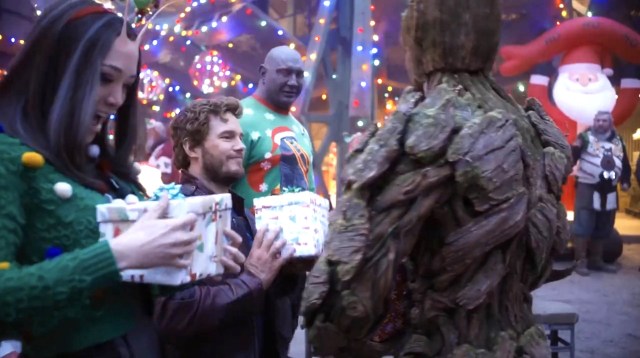 James Gunn is dispelling an impressive misconception about Groot in the upcoming The Guardians of the Galaxy Holiday Special.

Earlier Thursday, the initial reactions for Marvel’s Special Presentation coming to Disney Plus next week heaped praise upon the spacefaring adventure that happens to involve a heavy dose of Kevin Bacon. In one of those initial reactions, which gave the special a 10/10 overall, the Twitter user claimed “Groot being practical was dope.” Gunn retweeted the post, with a surprising revelation,

“Groot was created solely by our incredible VFX artists, but thank you (and I’m sure they find that you think it was practical very encouraging!).”

This all seems to imply that, at least for one viewer, the computer-generated imagery in the holiday special was so convincing it was mistaken for a practical in-camera effect, such as through animatronics, props, a life-like suit, or puppetry. But no: it was all CGI that brought Groot to life, apparently.

There’s also a surprising connection between the Marvel holiday special and Gunn’s recent foray into the world of DC. As the director explained,

“These are the exact same artists I used on Peacemaker and The Suicide Squad (and, for my money, Squad has the best VFX of anything I’ve [ever] done — hoping to take things even higher in [Guardians of the Galaxy] Vol 3).”

Gunn is experiencing something of a career renaissance after he was temporarily fired from Marvel a few years back for old offensive tweets. During his estrangement from Marvel, DC scooped him up as the director for 2021’s The Suicide Squad and a spinoff of HBO Max show, Peacemaker. Heavy campaigning from fans and cast members of the Guardians films soon resulted in Gunn being reinstated at Marvel to write and direct Guardians of the Galaxy Vol. 3.

However, Warner Bros. Discovery has already installed Gunn permanently as a figurehead by recently promoting him to being an executive who will co-lead the newly minted DC Studios. As such, Gunn will ironically be the direct business competitor of Marvel boss Kevin Feige.