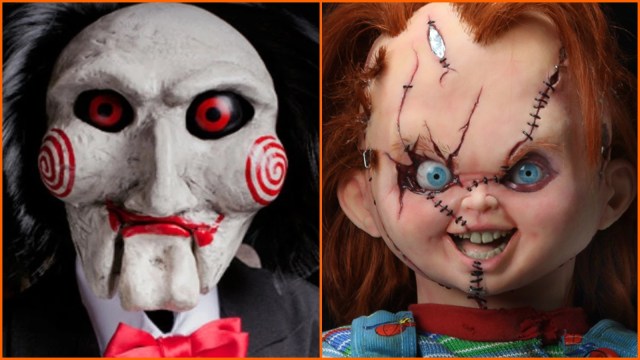 In the red corner, we have notorious serial killer Charles Lee Ray, aka The Lakeshore Strangler, aka Chucky. In the blue corner, we have civil engineer turned calculated killer, John Kramer, aka Jigsaw. Both the Child’s Play and Saw franchises are infamous for graphic imagery, glorified gore, and unjustified murder, but which mascot lays claim to the most kills overall?

While Child’s Play came long before Saw, both Don Mancini and James Wan’s respective franchises have garnered a cult following for the inclusion of senseless violence, which seems to be an attractive topic for morbidly curious individuals. While Saw is a biological horror and Child’s Play is more of a conventional slasher, both sagas have spawned multiple sequels. As for the original Child’s Play, the film has spawned six sequels, a television series, a remake, comic books, and a video game. Meanwhile, Saw consists of nine films overall with the latest being Spiral: From the Book of Saw in 2021 and a tenth film, titled Saw X, currently in development.

Child’s Play premiered in 1988 to rave reviews, spinning a twisted tale of voodoo and murder, unlike anything the ’80s and prior had ever seen before. The franchise follows Charles Lee Ray, a serial killer who misuses voodoo teachings to cheat death and continue his blood-soaked rampage, eventually possessing a Good Guy doll and adopting the moniker “Chucky”. That same Good Guy doll — now known as Chucky — is gifted to six-year-old Andy Barclay as a birthday present and begins terrorizing both Andy and his widowed mother Karen. In later films, Don Mancini introduces supporting characters in Tiffany Valentine, Chucky’s girlfriend, and Nica Pierce, a paraplegic woman whom Chucky possesses.

Over 15 years later, James Wan (known for his later works in The Conjuring and Insidious franchises) unveiled Saw in his directorial debut. The original Saw was written by Leigh Whannell, who also stars as Adam Stanheight. Veteran actor Tobin Bell steals the show as John Kramer, whom the Saw franchise centers around. When Kramer is diagnosed with terminal cancer and narrowly escapes death after a suicide attempt, he gains a newfound appreciation for life and thereafter dedicates his life to test the wills of others. He kidnaps degenerates, places them in convoluted traps, and forces them to fight for their lives.

While Child’s Play (or the “Chucky” franchise) has been running for over 30 years and Saw for 18, there’s been more than enough bloodshed in the near 50 years collectively to satisfy the hunger of horror junkies everywhere. But the looming question remains: Who had more kills — Chucky or Jigsaw?

Excluding the Chucky series, which would likely make the murderous doll’s tally much higher, Chucky has claimed 67 victims from Child’s Play (1988) to Cult of Chucky (2017). The kill count can be somewhat confusing at times, especially from Bride of Chucky (1998) onwards as Chucky begins to tag-team with Tiffany Valentine (Jennifer Tilly), possess others to complete kills, and create duplicates of himself in Cult of Chucky and beyond.

However, as it stands with the Child’s Play trilogy; Bride of Chucky, Seed of Chucky, Curse of Chucky, and Cult of Chucky, the titular antagonist has stabbed, strangled, shot, electrocuted, beaten, and smothered over 60 unfortunate individuals (including animals, which crosses the line).

Jigsaw sentenced degenerates to death in testing their will to live

In all nine films from Saw (2004) to Spiral (2021), Jigsaw killed 86 so-called “degenerates” — 55 or 57 of whom failed their tests while the other 22 were successful. However, the Jigsaw killer takes many forms; originally John Kramer from Saw to Saw III (2006), it was Amanda Young and Detective Mark Hoffman that adopted the Jigsaw moniker to continue John’s legacy following his death. When Amanda also dies in Saw III, Hoffman continues the legacy alone until Jigsaw (2017), when a copycat killer starts to replicate Kramer’s misguided teachings.

There are various flashbacks within installments that allude to Kramer’s involvement in preparing future traps long before his murder, which acted as a failsafe to keep the Jigsaw name alive when he eventually passed — either artificially from cancer or deliberately at the hands of a killer.

So, Jigsaw emerges victorious after claiming an extra 19 victims. However, the Saw franchise appears to have an unfair advantage with an extra feature-length film to its name, especially with Spiral reaching even greater heights as far as gory deaths go.

The Child’s Play franchise currently awaits the second season of Syfy’s Chucky series, which is scheduled to premiere on Oct. 5, 2022. Meanwhile, Saw X has snagged a theatrical release date of Oct. 27, 2023. Perhaps in the coming years, the tables will turn and see Chucky come out on top.