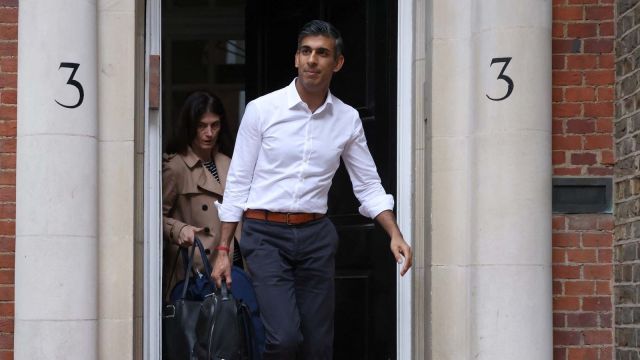 Welcome to what might be a very interesting week for Star Wars. Andor episode eight will air on Wednesday, in which it seems that multiple plotlines will converge as Cassian finally ends up on the ISB’s radar. On the same day, the entirety of the new show, Tales of the Jedi, will drop on Disney Plus, consisting of multiple CG animated shorts revealing the secret backstory of various prequel trilogy characters.

We’re particularly looking forward to seeing Count Dooku and Qui-Gon Jinn as Master and Padawan in the years before The Phantom Menace, together with shedding some light on the early days of Anakin and Ahsoka’s relationship. The information here should inform the upcoming Ahsoka live-action show, which we know will feature Hayden Christensen as Anakin (whether in flashbacks or as a Force ghost).

First some news from over the pond, where the United Kingdom is now led by a man who once wanted to be a Jedi Knight.

The United Kingdom has just appointed its third prime minister this year, with the departing Liz Truss proving to be as competent and popular as Jar Jar Binks. Today, after a very speedy hunt for a replacement, it’s been confirmed former chancellor Rishi Sunak will be taking her place. He’s got an enormous mess to clean up and is already facing multiple calls to hold a general election, but Sunak getting the top job means some major representative boundaries have just been broken.

Yep, the U.K. has its first Star Wars fan prime minister. Sunak has long been open about his love of the franchise, once telling schoolchildren his childhood ambition was to be a Jedi Knight and attending the premiere of The Rise of Skywalker:

Sunak’s love of Star Wars seems to have raised eyebrows among his colleagues, with a profile in Tatler asking an anonymous MP what inspires him:

“It’s Star Wars. Most of his political philosophy comes out of the Star Wars trade wars that are about the independence of various kingdoms from the Empire. He’s not someone intellectual.”

Sunak’s favorite Star Wars movie is The Empire Strikes Back, though according to The Guardian he’s also “been known to sing the praises of the cinematography of the last half-hour of Revenge of the Sith.” Time will tell if Sunak ends up as an all-powerful Galactic Emperor or simply aboard the Tory party Death Star as Luke’s X-Wing starts the trench run.

Admiral Thrawn: Irredeemably evil or just someone who gets the job done at any cost?

Admiral Thrawn is one of the best Star Wars characters not to have ever appeared in live-action. He has a pedigree stretching all the way back to 1991 when he made his debut in Timothy Zahn’s Heir to the Empire. Since then Thrawn has made the leap to animation in Star Wars: Rebels and got a name check in The Mandalorian episode “The Jedi.”

He’s distinct from other Star Wars villains in that he’s a tactical mastermind and not explicitly villainous in the traditional sense. Instead, he’s more of a grand manipulator and strategist, understanding that if you want to make an omelet, you have to break a few eggs. Whether that makes him “evil” or not is in the eye of the beholder for Star Wars fans, though the conclusion is that behaving with some personal honor is overridden by working for the fascistic Galactic Empire.

We admit we’re nervous about Lucasfilm getting the character right in Ahsoka, though if the rumors about Lars Mikkelsen reprising his Rebels role are true it’s time to get hyped about Thrawn’s return.

Genevieve O’Reilly deserves some silver for Mon Mothma in Andor

Up until Andor, many Star Wars fans weren’t particularly interested in Mon Mothma. After all, she has a tiny role in the original trilogy, has only sporadically appeared in the animated shows, and was cut completely from Revenge of the Sith. We’re now seven episodes deep into Andor, and she’s one of the best things in it.

Nuts for lightsaber battles and space combat, we want more incredibly tense cocktail party scenes in which Mon Mothma tries to decide whether she can trust old friends enough to involve them in the Rebellion. O’Reilly’s performance is a big reason why these scenes are so successful, particularly when she’s trying to balance her convivial public face as a senator while secretly building a paramilitary group right under the Empire’s nose, so, is an Emmy in the pipeline?

There’ll be a lot of competition this awards season (there always is when a new season of The Crown airs), but we’d love to see O’Reilly get some recognition for her sterling work here. Heck, at this point we’d watch a Mon Mothma solo show that is just her navigating Coruscant society.