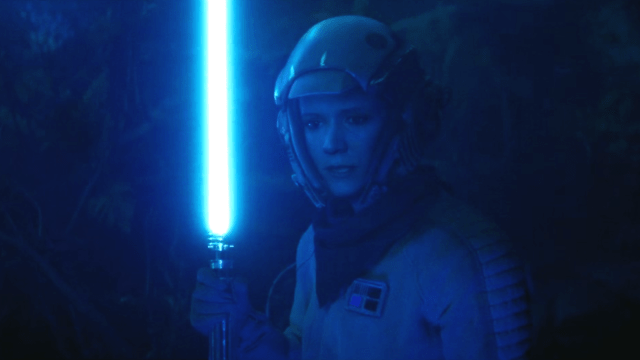 One of the most beloved characters in the Star Wars galaxy finally got to yield a lightsaber in The Rise of Skywalker, but concept art shows a different colored blade for Carrie Fisher’s Princess Leia.

Confirmed to be a Jedi or at least force sensitive in The Empire Strikes Back, and retconned to be the one Yoda actually wanted to train, Leia got her proper dues in the sequel trilogy. Shown to be in-touch with the force and powerful, a flashback scene in Episode IX saw her take on her brother Luke in a friendly training duel.

In the final product, she wielded a blue lightsaber during their sparring session, but newly released concept art shows Fisher’s character wielding a purple bladed saber. Artist Adam Brockbank shared the concept to his Instagram, which also shows off the fencing inspirations to the scene.

This isn’t a tribute to the famous Samuel L. Jackson request to have a purple lightsaber, but rather a wish of Fisher herself to wield a purple blade if she ever got the chance. Fisher unfortunately passed away before the sequel trilogy could finish, so her daughter Billie Lourd filled in as a double during certain scenes such as the flashback.

In Star Wars Legends, purple lightsabers are much more widely used, with Mara Jade known to have one. The new canon has shown there is more variety to lightsaber colors than just the usual blue, red, green, and purple, with Rey Skywalker crafting a yellow-bladed one at the end of Rise of Skywalker.

The entire Star Wars saga can now be streamed on Disney Plus, with a younger Leia recently appearing in Obi-Wan Kenobi.