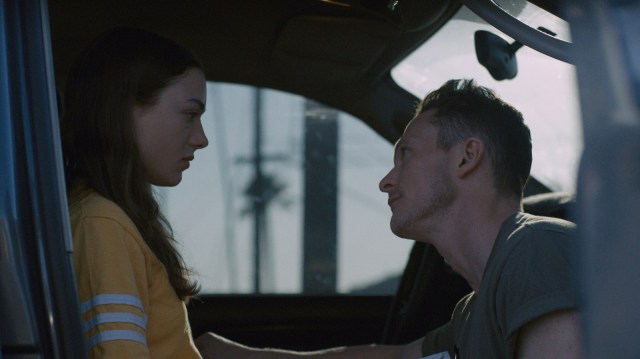 Palm Trees and Power Lines from writer-director Jamie Dack is destined to become a divisive feature film dealing as it does with the reality of relationships in contemporary society by exploring taboo topics. The story focuses on a socially questionable connection between Lea (Lily McInerny) and Tom (Jonathan Tucker), A teenager lacking any strong father figure and an adult in his thirties, who knowingly manipulates her for financial gain.

Expanded from a short that Dack wrote and directed previously, this mini-budget indie effort slowly draws audiences in through vicarious observation. Following Lea and her mother Sandra (Gretchen Mol) as they simply live their lives, against the backdrop of suburban California, viewers Lea hanging out with her best friend Amber (Quinn Frankel) and various boys within their friendship group, whilst attending high school.

After fifteen minutes of preamble that allows Dack to establish the fractured family dynamic and indifferent attitude passed on from mother to daughter, Lea first encounters Tom (Tucker) outside a local diner. Having defended her from an irate owner after money following a last-minute attempt to avoid paying the check, an awkward connection starts developing. One which proves pivotal to the drama which follows.

From then on audiences are likely to turn off at any point, as two people separated by a generation, fumble through an uncomfortable courtship that is laced with nefarious intent. There are very few films that deal directly with grooming, meaning that comparisons are thankfully very thin on the ground. However, should there be anybody out there desperate to watch some, Luc Besson’s Leon would be one while Martin Scorsese’s Taxi Driver could be classed as another.

In both instances, neither Leon nor Travis Bickle serves as direct character comparisons, but there are definite similarities to be drawn from the way their relationships are defined. Both with Matilda (Natalie Portman) and Iris (Jodie Foster) respectively, there is an inherent age gap even if the intentions of their male companions are never malicious.

However, society has subsequently evolved and shone a light into some unsavory areas — ones which Palm Trees and Power Lines directly addresses, meaning the role of Tom comes with a multitude of challenges for any actor who chooses to take it on. Similarly, whoever decides to tackle Lea has also got to be carved out of granite as she endures some genuinely uncomfortable events which some will find hard to watch.

Thankfully, both Tucker (Westworld) and untested talent McInerny are admirable in their respective roles skating a thin line between questionable companionship and an awkward surrogate father-daughter connection. Based in part on personal experiences Dack went through growing up, Palm Trees and Power Lines also speaks to an apathy inherent within a generation devoid of direction — one where social interactions are virtual, relationships temporary, and expectations tainted by unrealistic multi-media celebrities. Much of the allure which Tom represents is formed around notions of escape from her family situation, as Lea first lies about their relationship to friends whilst allowing an unhealthy emotional attachment to form.

These scenes, which could have so easily been marred by cliché, instead come off as a carefully handled and considered evolution of an unsavory situation. Palm Trees and Power Lines never drifts towards anything sordid, but instead makes sure to keep things grounded for maximum emotional impact, meaning that when the caring side of Tom turns predatory, audiences are right in the room with Lea when events turn nasty.

During the acts themselves, audiences have nothing more than deafening silence to numb their senses, while a shell-shocked Lea leaves the motel room afterward. The aftermath is handled with just as much delicacy as an ashamed and worldly-wise teenager runs back home to hide. That writer-director Dack never feels the need to sensationalize anything, but instead strips it back to raw emotion means this is not a film audiences will willingly revisit quickly.

Blindsided by a physical intrusion and psychologically off-kilter, Lea finds solace with Amber while life carries on as normal shortly afterward. The conclusion shies away from sugar-coating any element of this brutal relationship drama, not only leaving audiences with a hot potato talking point come those closing credits, but also delivering one dozy of a downbeat ending which takes away any sense of optimism.