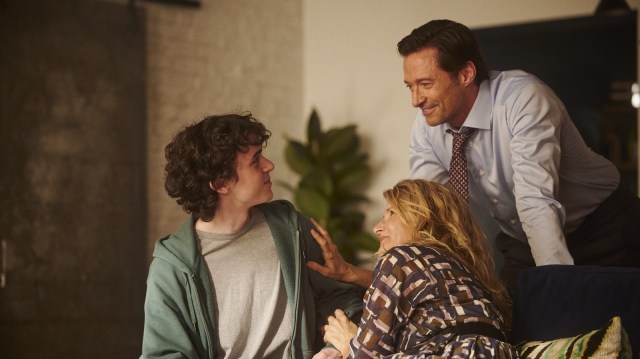 Image via LFF
Review of: LFF Review: 'The Son' is rife with cliches and wasted opportunities

The Son could have been a dramatic home run that effortlessly explored anxiety, parental break-ups, and contemporary debates around generational anxiety.

With veteran screenwriter Christopher Hampton on board, this should have been plain sailing as the Oscar-winning scribe fashioned a work of genuine poignancy. Alongside writer-director Florian Zeller, The Son should have been nothing short of peerless as it sought to explore fractured relationships. With a young actor in the role who intimately dissected every element of on-screen anxiety, this should have been another home run to complement The Father, as it delicately explored a hot potato topic.

Unfortunately, one thing is apparent after an intriguing hour of drama which establishes Peter (Hugh Jackman), Kate (Laura Dern), Beth (Vanessa Kirby), and Nicholas (Zen McGrath) in relation to each other — The Son falls short. Not for any one reason in particular, but for a number of interconnecting issues, which feel overly earnest in their execution.

Introduced early on as a stable family unit raising their new baby, Peter and Beth are instantly disrupted by his ex-wife Kate. Their separation is still fresh and the titular son Nicholas is having trouble adjusting to the new situation. He is rebellious, withdrawn, and closed off in counseling. Months of truancy from school and hints of self-harm all come to a head early on, defining Nicholas as an attention-seeking teen with severe behavioral issues.

In an attempt to be more of a positive influence, Peter invites him to live with them, get his life back on track, and start afresh. There are predictable bonding moments between father and son, as well as examples of emotional manipulation from Nicholas as he attempts to undermine Beth. However, what disappoints most of all from an audience perspective is the amount of cliché consistently flying around.

Although the principal players try to squeeze as much drama as possible out of this premise, there is no getting away from the fact that it feels thin. Everywhere you look there is some severe emoting going on, as crocodile tears are shed as if willing an emotional connection to materialize. Plentiful amounts of anguish combine with baleful glances, as Nicholas goes further and further off the rails.

However, there is one redeeming feature amongst the soap opera levels of melodrama that makes The Son worthwhile. A ten-minute cameo from silver screen titan Anthony Hopkins, who singlehandedly wipes the floor with Hugh Jackman without breaking a sweat. At a point in his career when most Oscar winners have retired gracefully; Hopkins still seems capable of turning on that magnetic screen presence and reducing anyone else to ash.

As a cameo, it is devastating in illustrating how great acting should be done. There is no hint of ham in the moments he shares opposite Hugh Jackman while defining his flawed father figure as devoid of forgiveness alongside a co-star who is clinging on for dear life. It is an undeniable high point in a film that at times feels self-serving in terms of agenda.

There will be those who enjoy The Son and bestow it with superlatives like thought-provoking, inspiring, and Oscar-worthy, but everyone, as they say, is entitled to their opinion. Although this is nothing really wrong with The Son aside from a sub-standard script, what consistently rankles throughout is that sense of wasted potential.

Although everyone can sympathize with the situation as depicted on screen, there is no doubt that something more poignant could have been made. This might be based on the play by Florian Zeller, but you can only imagine that something has gotten lost in translation. Kirby, Jackman, and Dern have all done better work in the past and deserve better out of principle. However, their jobs get infinitely more difficult when acting opposite McGrath, who seems incapable of competing with his contemporaries on screen.

Nicholas lacks the emotional layers which would have at least made him empathetic. Although his condition is well recognized, the character himself bleats and moans, while everyone cow tows to any potential panic attack which might happen. The suicidal episodes which serve as a central dramatic thrust somehow lack impact, while any argumentative confrontations feel forced. For those reasons and a few more besides The Son fails to elicit anything other than indifference.

LFF Review: 'The Son' is rife with cliches and wasted opportunities