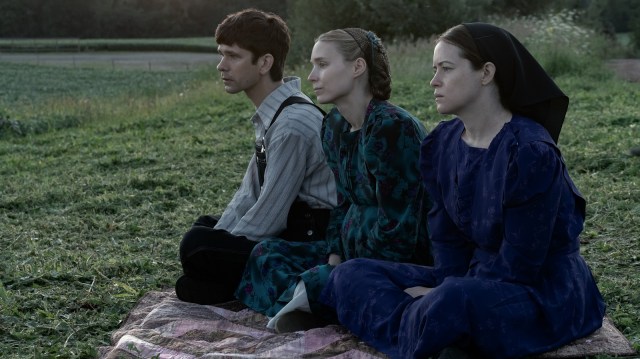 Self-assured, brimming with conviction and intellectually demanding - Women Talking is what cinema should be about.

Adapted from the novel by Miriam Toews, Women Talking represents a cinematic deconstruction of feminine identity. Complex in its dissection, comprehensive in its encompassing approach, and packed with powerhouse performances on all sides this feels like a political treatise.

Charting the course of conversations discussing female roles within an isolated colony, following heinous physical assaults and no apparent retribution, writer-director Sarah Polley brings together the full force of some formidable character actors. Polley lays down her agenda and sets her cinematic stall to hold court on a woman’s role in society, shaping, molding, and refining Women Talking into an even-handed examination of what that means in reality.

Produced in part by Dede Gardner (Moonlight), Brad Pitt (12 Years A Slave), and co-star Frances McDormand (Nomadland), – this film might not preach from the pulpit but it does carry weight in every word that gets uttered. Rooney Mara (Ona), Claire Foy (Salome), and Jessie Buckley (Mariche) are firing on all cylinders from the off, as this stripped-back conversational classic gifts everyone a role worth fighting for.

Cinematographer Luc Montpellier (Tales from the Loop), ensures every frame possesses a clean crisp quality, which in turn gifts each conversational gambit its own unique character. Holed up in a split-level barn on the outskirts of town, this group of women with dueling perspectives attempts to reach a consensus, drawing pros and cons up on the impact of their proposed actions while August (Ben Whishaw) acts as note taker.

It is within these dialogue exchanges that this film lives and breathes, allowing a real debate to play out concerning every facet of femininity. There is a real discussion around notions of freedom in society, alongside an individual right to fight for their place in this world. Polley is also savvy enough to acknowledge that softer traits, which are themselves inherently feminine also get addressed.

From the off, Women Talking possesses a timeless quality that allows these ideas to be liberated through a global medium. Layers of sound and vision coalesce with understated eloquence, as cinema weaves its spell, combining character arcs and dramatic structure into one cohesive whole. Allowing this masterful piece of filmmaking to transcend conventions, the film occupies a middle ground somewhere between allegorical understatement and divisive gender debate.

Interestingly, aside from the presence of August, there is no indication of another man on film aside from a few instances of injury. They exist as symbols outside this small circle of women, empowered by each other into action after decades of stasis. Jolted from their apathy by a singular act of male dominance, this violation echoes back through decades of degradation, forcing them to take a stand.

In terms of performance, everyone here gives a peerless portrayal of femininity perpetually muzzled by an overbearing male presence. There may be audience members who go into Women Talking expecting the cinematic equivalent of an academic lecture or an overly stylized arthouse think piece continually wrapped up in its own self-importance. What will surprise many is how far away from those stereotypes this film manages to move.

There is a quiet authority that permeates every exchange, while an undercurrent of brooding conviction steers the actions of these pioneering women. For two hours plus, Mara, Foy, and Buckley hold court within this ensemble leaving scorched earth in their wake, making this a film about Women Talking come to mean something much more potent and infinitely more powerful, while it lingers longer in the memory as a result.

Besides the preoccupation with contemporary issues which so fundamentally frames this film, it is worth noting how well things work dramatically; not merely a showcase for the actors involved, but also for Sarah Polley herself, who has matured into a filmmaker of substance surely destined for awards recognition.

As the role of cinema continues to evolve in conjunction with streaming platforms, films like this will hopefully get made in larger numbers. At present only a small number of production companies including Pitt’s Plan B are forcing the agenda. However, society never stops talking, either about women and their place in this world, or any number of other topics which promote heated debate. From that standpoint, there is a degree of comfort to be had from realizing that Women Talking may only be the tip of the iceberg.

Self-assured, brimming with conviction and intellectually demanding - Women Talking is what cinema should be about.