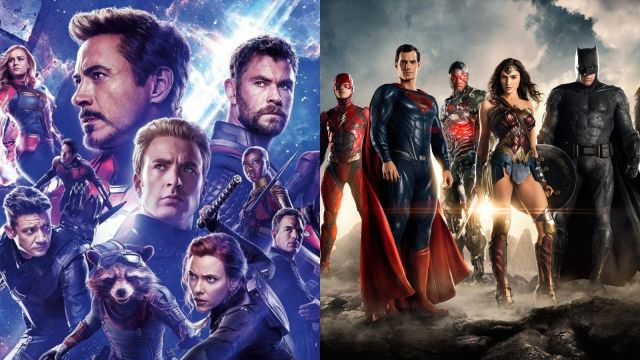 Now that Warner Bros. Discovery has found their Kevin Feige-like figureheads of the newly-minted DC Studios — which includes co-chairs and co-CEOs James Gunn and Peter Safran — fans are hoping that a Marvel and DC crossover event will happen at some point in the future.

Since Gunn is helming the forthcoming Guardians of the Galaxy Vol. 3 for Marvel — while at the same time now being DC Studios’ boss — it has made people wonder whether an Avengers vs Justice League film may actually take place. As one Twitter user correctly pointed out, Marvel boss Feige famously said “never say never” when it comes to a potential crossover with DC.

We could only imagine what the epic movie poster for such a film could be.

One commentator wondered if Gunn was perhaps some kind of plant installed by Feige so he could sew the seeds at DC for the crossover film in question to take place.

One can imagine the shenanigans that may take place when Gunn and Feige host dueling presentations at Comic-Con next year, and hopefully, “all culminating in a little movie.”

Though we don’t know what kind of friendship Feige and Gunn might have behind the scenes — if at all — many people seemed convinced they are likely pals when the cameras aren’t rolling. Regardless, whatever tension that may have existed between them when Gunn was temporarily fired from Vol. 3 for old offensive tweets that had resurfaced, it seems like they put that drama behind them since Gunn was eventually rehired.

Plus, an interview Gunn gave to The Hollywood Reporter last year seemed to indicate the decision to fire Gunn came from higher-ups at the House Mouse and that Feige was simply the messenger of the bad news.

The presumed friendship shared between Gunn and Feige was the main reason many people predicted a DC/Marvel crossover may be closer to becoming a reality than we may know.

Speaking of crossovers, we wouldn’t mind seeing Batman and the Punisher face off one day, as long as we’re exploring the possibilities.

We can only imagine the joyous phone call shared between the pair after this significant news.

DC’s latest effort, Black Adam, is currently playing at a theater near you.