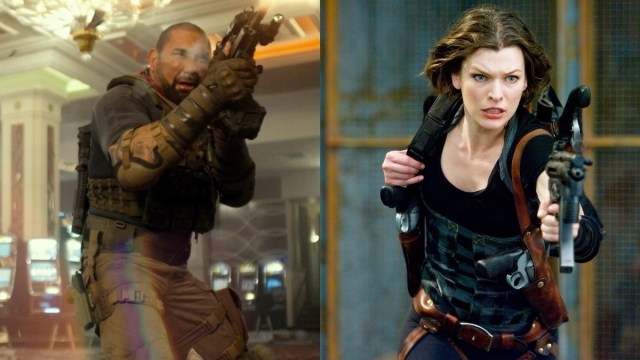 Paul W.S. Anderson is already letting the world in on the events of his upcoming project, In the Lost Lands, which will star two action powerhouses — Resident Evil’s Milla Jovovich and Guardians of the Galaxy star Dave Bautista. The director has teased that the two will go head-to-head in battle, which is sure to increase the fans’ anticipation.

In a conversation with Variety celebrating the 25th anniversary of Event Horizon, Anderson revealed that filming will commence on Nov. 14, and heaped praise on longtime partnerJovovich and Bautista, who he’s very excited to work with.

“We start shooting on Nov. 14, so I’m actively involved in prepping the movie right now. It’s Milla and Dave Bautista, who are going to be amazing. Seeing them go head-to-head is just going to be fabulous.”

When asked if they were going to fight each other, the director agreed, stating it was pretty obvious, while also adding that the story will be “dark and twisted.”

“Oh yeah, I mean you can’t have Milla and Dave in a movie and not have them have a go at it. It’s an adaptation of a George R.R. Martin story so you know it’s going to be dark and twisted and have wonderful characters. Because that’s what George does.”

In the Lost Lands will follow a sorceress sent by a queen into the wilderness to find a magical power that will help her fulfill her love. Assisting her on the quest is a drifter, and together, they encounter several mystical creatures on the way.