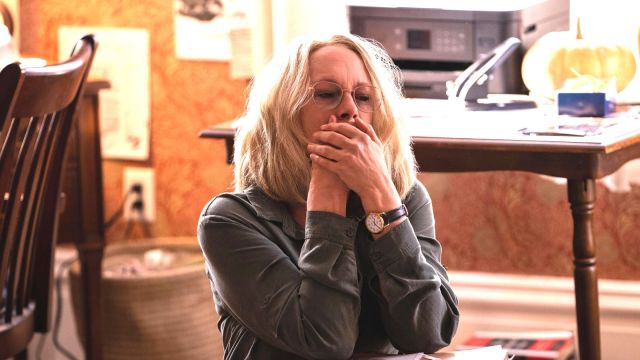 The latest and (allegedly) last chapter in the Michael Meyers saga, manages to find an ending while having some shaggy and unhinged fun along the way. It might not entirely work, but 'Halloween Ends' takes you on one last wild ride and goes into some pretty unexpected places.

Horror endings are hard to do. They’re even more difficult when there is the added weight of decades of expectations and fan desires on top of sticking the ending. Halloween Ends, the latest and (allegedly) last chapter in the Michael Meyers saga, manages to find an ending while having some shaggy and unhinged fun along the way. It might not entirely work, but Ends takes you on one last wild ride and goes into some pretty unexpected places.

Opening four years after the events of Halloween Kills, we find Laurie (Jamie Lee Curtis) and Allyson (Andi Matichak) living together and taking things a day at a time. In the wake of their heavy losses in the last film, the two women have taken different routes in their respective journeys with grief: Laurie has decided to “Live, Laugh, Love” it up and embrace the joy and light she can find — she’s sober, working on a book about her experiences, and living again. Allyson, on the other hand, is in a much different place — she’s angry, and still very much working through her feelings about losing her mom and then-boyfriend. At least Michael Meyers, or “The Shape” (James Jude Courtney), is gone for now, right?

Before we even catch up with these three main characters, though, we meet Corey (Rohan Campbell), an outcast who accidentally killed a child he was babysitting the year after the events of Halloween Kills. He’s been dealing with the ostracization following this incident, with townspeople bullying him and generally being cruel. When Corey is bullied by some teenagers and taken into the hospital where Allyson now works for treatment, the pair are drawn to each other, eventually making a chaotic coupling that threatens to burn Haddonfield to the ground. After being bullied and thrown off a bridge, Corey miraculously survives, and then finds The Shape, who’s been living in the sewers of Haddonfield, apparently. Weakened after the events of Kills, The Shape tries to murder Corey, but instead, a sort of soul-transference/unspoken connection happens between the two, effectively turning Halloween Ends into a serial killer apprenticeship movie (for at least a little bit). Corey learns from Michael, and then steals his identity, unleashing his anger on the town. His spree results in some gruesome kills, and even forces Michael out of the sewers, spearheading his own demise.

If this summary sounds shaggy, it’s because it absolutely is. Halloween Ends feels like several movies mashed together to make something superbly goofy, a little unhinged, and narratively uneven. In spite of all this, the movie was an absolute blast to watch. The unexpected twists and turns make for a truly wild ride and the practical effects of the gore and kills were impressively wet and sticky (there is a great image where a DJ loses his tongue and it falls on the record playing on air while the needle skips over it endlessly). The cast is doing their best in a movie that’s asking them for a lot of nonsense, frankly. Jamie Lee Curtis, of course, is great as Laurie, trying to heal however imperfectly. Campbell brings some great, dangerous energy to Corey, and I’m eager to see what he does next.

The ending itself — the big goodbye to the iconic Michael Meyers, is sober and satisfying. Without spoiling the how, I can say that The Shape’s death in this certainly seems final. Halloween Ends is certainly a loud, goofy conclusion for a beloved franchise. Die-hards might hate it, other people might love it. I personally think it could be a fun midnight movie in a couple of years’ time, but what’s for sure is that Michael and Laurie will never fade away in the hearts of horror fans everywhere, mine included.

The latest and (allegedly) last chapter in the Michael Meyers saga, manages to find an ending while having some shaggy and unhinged fun along the way. It might not entirely work, but 'Halloween Ends' takes you on one last wild ride and goes into some pretty unexpected places.