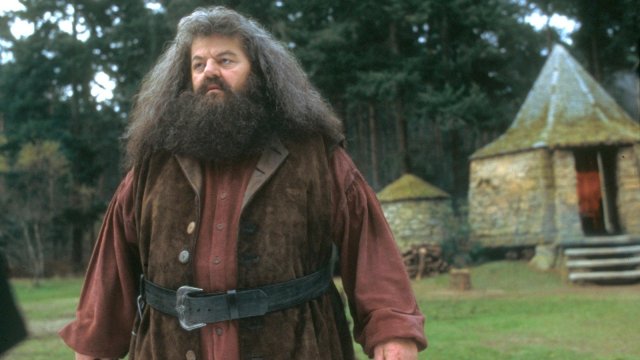 In some heartbreaking news, beloved Scottish actor Robbie Coltrane has passed away at the age of 72. The prolific character actor had been a fixture on screens both big and small, since his emergence into the industry in the early 1980s, rising through the U.K. comedy scene to eventually become a familiar face in many a Hollywood blockbuster.

Real name Anthony Robert McMillan (he took his stage name from jazz saxophonist John Coltrane), Robbie Coltrane is naturally best remembered for his role as Hagrid in all eight Harry Potter movies. And while the international acclaim, as well as intergenerational adoration that character has earned him, is well-deserved, his career highlights go far beyond the limits of Hogwarts.

As we tip our hat to a talented performer whose range varied from rip-roaring comedy to searing drama, let’s reflect on the best movie and TV roles of Robbie Coltrane.

Practically every venerable British actor has played a hard-boiled detective at some point, and Coltrane is no different. Although he was most known for his lighter-hearted performances, he was perfectly cast as Dr. Edward “Fitz” Fitzgerald, a criminal psychologist (colloquially known as a “cracker”) in the long-running crime drama Cracker, which lasted for an impressive 13 years.

Coltrane portrayed an altogether more sinister giant than his more famous vertically enhanced character in Van Helsing, the cult favorite actioner that brought together various horror icons. The star featured as Mr. Hyde, here depicted as a brutal Hulk-like creature — for whom Coltrane got to use his natural Scots burr — who gives Hugh Jackman’s monster hunter a run for his money in the film’s exciting opening.

Coltrane was a gifted character actor who could appear in a small supporting role and make it one of the most memorable in the whole production. Such is the case with his turn in Ocean’s Twelve, in which he plays Matsui, an enigmatic associate of George Clooney’s Danny Ocean and Brad Pitt’s Rusty Ryan. In one hilarious scene, the three characters talk in bizarre code, leaving Matt Damon’s Linus struggling to keep up.

Before he became a household name, Coltrane got to give his take on one of the most celebrated characters in William Shakespeare’s canon in Henry V, the first of a celebrated series of adaptations of the Bard’s work from Kenneth Branagh. Opposite his future Harry Potter co-star in the title role, Coltrane portrayed Prince Hal’s larger-than-life companion, Sir John Falstaff.

Coltrane only made a one-off appearance in Frasier, but the importance of the episode and the hilarity of his performance ensures he goes down as one of the beloved sitcom’s best guest stars. In the series finale, the actor turns up as one of Daphne Moon’s oft-mentioned brothers — namely, Michael, whose strong accent is so unintelligible that no one outside his family can tell what he’s saying.

Much like his role in Frasier some years later, Coltrane made a couple of brief appearances on the classic British comedy Blackadder but marked himself out as a favorite of fans in the process. He initially played Samuel Johnson, the writer of the first English dictionary, in Blackadder the Third before portraying the very Hagrid-like Spirit of Christmas in Blackadder’s Christmas Carol.

Before he was in Harry Potter, Coltrane joined Britain’s other great movie franchise, the James Bond films. In fact, he appeared in half of Pierce Brosnan’s movies in the scene-stealing supporting role of Valentin Zukovsky, an ex-KGB agent turned crime boss who becomes an unexpected ally to the super-spy, although the pair’s clashing personalities ensure there’s much crackling banter.

Still, despite the breadth and depth of Coltrane’s filmography, there’s really no contest when it comes to his most beloved role. Of course, it has to be his turn as Rubeus Hagrid, keeper of keys and caretaker at Hogwarts School of Witchcraft and Wizardry. Thanks to some visual trickery and the immense warmth of his performance, Coltrane embodied every (lofty) inch of the loveable character from the books and stands as one of the finest pieces of casting in the whole wide Wizarding World to this day.