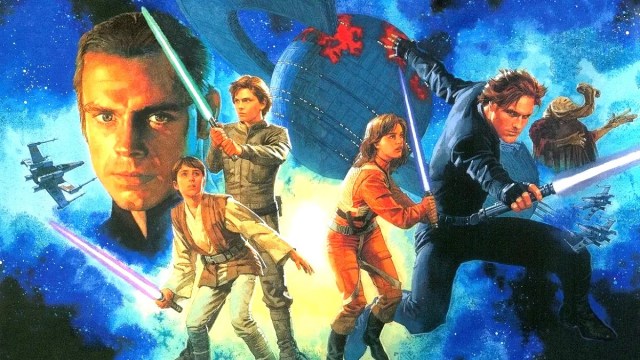 In 2014, Lucasfilm and Disney went beyond anything the Empire could ever dream and wiped out an entire universe. Since 1979 fans had enjoyed books, video games, and comics set in the Expanded Universe, which vastly increased the scope of Star Wars beyond George Lucas’ six movies, continuing Luke, Leia, and Han’s story after Return of the Jedi.

Disney, wanting to work with a clean slate after its purchase, wiped all that away. From this point, the Expanded Universe would become Legends, and was no longer considered canon. Goodbye Mara Jade, Jacen and Jaina, the Yuuzhan Vong, Luuuke, and that one X-Wing pilot that looked like a horse.

But now, fans on r/StarWars are taking a more philosophical view and wondering whether, in a way, these stories could still be canon. Displaying admirable flexibility, they say that both the Expanded Universe and Disney’s stories can be canon: “just two different canons that I keep separate in my head.”

Another view is that what’s canon can be personal to you:

Others say it’s just a science-fiction franchise, so you should really relax:

Another opinion is that even though the Expanded Universe isn’t officially canon, it’s still relevant as Disney and Lucasfilm regularly bring in characters or concepts from those old stories. It’s arguable that the story of Jacen Solo was a direct inspiration for Kylo Ren’s arc (both are sons of Han and Leia who turned to the Dark Side), a lot of the Mandalorian mythology was lifted from EU novels, and Grand Admiral Thrawn made the leap intact.

So, if you’re hankering for some new Star Wars, perhaps dig out some of those dusty paperbacks. Sure, they may not be strictly canonical, but they’re fun adventures in a galaxy far, far away.