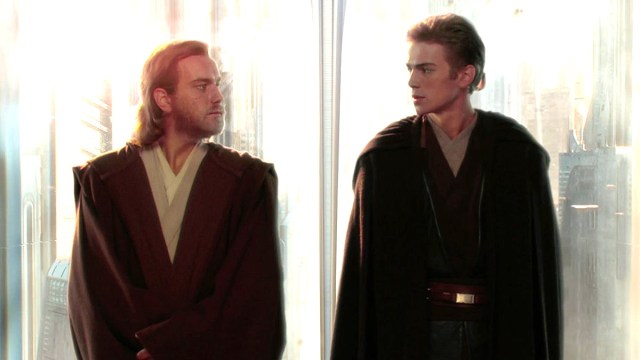 One of the Star Wars universe’s famous flings, Anakin and Padmé’s love affair was as scandalous as it was cringey. As a Jedi, Anakin was forbidden to engage in romantic relationships or get married, but that didn’t stop the young Jedi from falling head over heels for the senator he was meant to protect. Now, the internet is wondering just how much Obi-Wan knew, and if Anakin and Padme didn’t know that he knew that they knew…

The Jedi rules specifically forbid possessive attachment, believing that loss or jealousy could produce strong emotions and lead to the Dark Side, and would you look at what happened. This is also true of familial attachment, as they often separated children who were force-sensitive from their parents at an early age. Though this rule seems brutal, Anakin proves, once again, why it may not have been such a terrible idea.

Qui-Gon Jinn and Obi-Wan find Anakin a little later in his childhood when he has already become attached to his mother. Later on, when Anakin learns of his mother’s death he falls victim to anger and uses that anger to murder those responsible, leading him ever closer to the Dark Side as he vowed to become powerful enough to protect the ones he loved from dying. Jedi were allowed to love, but it was more an unconditional love that allowed them to be compassionate to everyone rather than a romantic love aimed at one person that could eventually lead to negative emotion.

Now, Star Wars fans are wondering just how much Anakin’s mentor and friend Obi-Wan knew about the whole thing. He was just too quick to guess that Padmé’s pregnancy had something to do with his young apprentice.

This user points out that the Jedi order didn’t realise that one of the senator’s was a Sith for a very long time, so who knows what else they missed.

But another user quickly debunks this.

There are a lot of people who bring up Star Wars: The Clone Wars series, which points very heavily to the fact that Obi-Wan knew something was up.

Others say he may have been lenient to his ward due to his own romantic attachment with the Duchess — those in glass houses, and all.

This user points to a conversation had between Obi-Wan and Padmé that was cut from the movie, which very clearly shows Obi-Wan was aware of the situation.

He even goes as far as to make pointed remarks to Anakin about his “secret” conversations, so surely he and Padmé were aware that Obi-Wan was onto them.

Some say that Obi-Wan’s affection for Anakin often led to him turning a blind eye.

Regardless of whether he knew or not, the lack of intervention would eventually lead to Anakin and Padmé’s secret marriage on Naboo, her pregnancy, and then eventual death during the birth of their twins, Luke and Leia. That knowledge of her death through a premonition pushed Anakin over the edge to the Dark Side, as he became desperate for a way to save her, which he still failed to do.