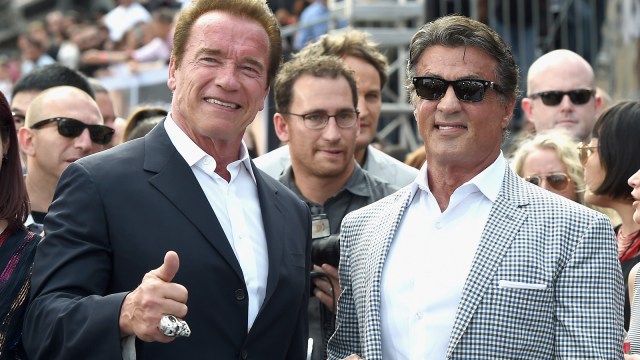 Rivals-turned-friends Sylvester Stallone and Arnold Schwarzenegger may both be in their late 70s, but the action movie icons aren’t ready to start leading the quiet life just yet.

In fact, in a hugely coincidental turn of events, both of them are gearing up to lead their first-ever TV shows, with Stallone’s Tusla King on the way, while Schwarzenegger’s still-untitled Netflix spy series has recently wrapped production. The two hang out whenever they can, with Sly dishing the dirt to The Hollywood Reporter on what they get up to outside of carving tiny pumpkins with giant knives.

“Arnold’s very wise and he loves to talk about philosophies which have got him to where he is. It’s good to talk to a man who actually has put his money where his mouth is and he’s achieved that. Then we start goofing around and being crazy – just laughing at the old times. I told him: “We are the last two tyrannosaurus.” We’re the last two meat eaters and there’s not much beef left out there. So we better enjoy each other.”

The pair may be among the last of a dying breed, but they’re not exactly ready to be fossilized. Both legends of running and gunning keep themselves plenty busy both on and offscreen, so even though their unique brand of machismo hasn’t been in vogue for a very long time as cinema continues to evolve, their fans aren’t ready to give up on them either.

With Arnold sitting out The Expendables 4, it’s a shame we won’t be seeing them together onscreen in the near future, but hopefully it’ll happen again in the not too distant future.