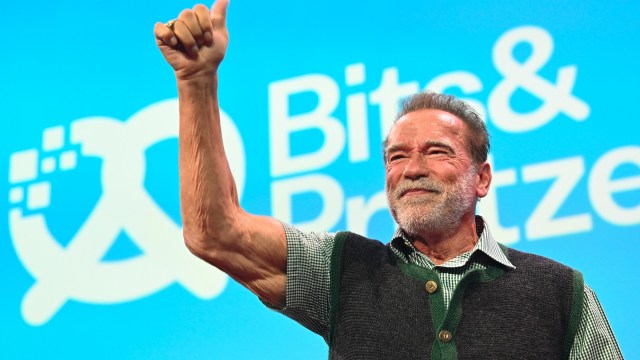 It’s been a long time since it was first announced Arnold Schwarzenegger would be heading to the small screen for the very first time to take top billing in an episodic project, but it looks as though the finish line is in sight for the action icon’s long-awaited Netflix espionage series.

We’re not even entirely sure what it’s called, with both Fubar and Utap being bandied around as prospective titles during a lenghty development and production process that was severely impact by the effects of the pandemic, which is understandable when you consider the leading man is 75 years old and has a history of serious heart issues.

Co-star Fortune Feimster shared a behind the scenes image marking her last day on set, though, and the gracious former governor of California responded in kind, as you can see below.

Top Gun: Maverick star Monica Barbaro plays Schwarzenegger’s daughter in the show, which gives off a hint of True Lies; ironic in itself when the James Cameron classic is getting an episodic redux of its own. The two leads play a father and daughter who have spent their careers working as elite CIA operatives, without the other ever managing to find out.

Of course, they end up discovering a life of deceit when they’re forced to partner up to save the world, while also strengthening their familial bond. It’s not the most original setup, but there’s boundless levels of fun in the premise, and “Arnold Schwarzenegger Netflix spy series” is enough to sell a lot of people on the project.