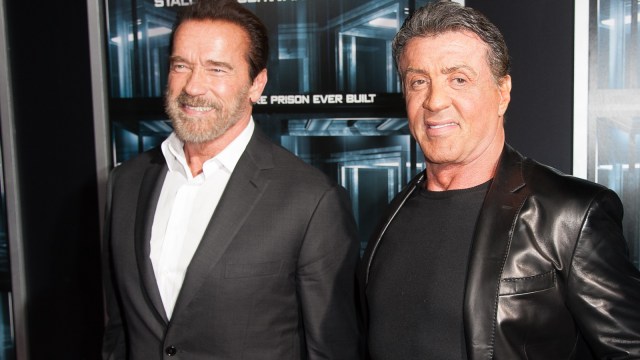 The rivalry between action icons Arnold Schwarzenegger and Sylvester Stallone was the stuff of legend, with the two beefy behemoths battling for supremacy at the box office throughout the 1980s and 90s, with things getting so competitive that the former trolled the latter into starring in Stop! Or My Mom Will Shoot, knowing it would suck.

However, since mending the fences and becoming friends, the bromance between the two elder statesman of ass-kicking has become wonderfully wholesome, with Schwarzenegger and Stallone regularly sharing winning updates to their social media channels that find them hanging out, smoking cigars, and generally being a pair of cool cats.

Their latest get-together does appear to find them compensating for something, though, with the Rocky and Terminator favorites opting to indulge in a spot of pumpkin carving just in time for the spookiest day on the calendar. However, there’s definitely a discrepancy between the size of the vegetable in question, and the gigantic knives they’ve chosen as their weapon of choice.

We say there’s no competitiveness between the two, but that might change in the near future now that they’re respectively gearing up to take their first steps into the world of episodic television – a plunge neither has made until their 70s. Stallone has crime thriller Tulsa King on the way, while Schwarzenegger recently wrapped his blockbuster Netflix spy show, so we wonder if there’s going to be any more ribbing between them once both projects are out in the open for the world to see, dissect, and discuss.