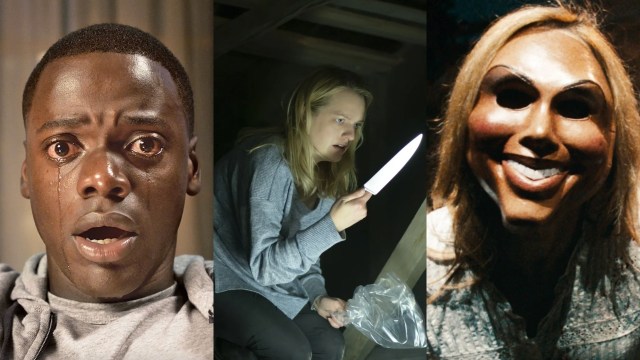 Blumhouse has successfully inaugurated itself as one of the most flexible and profitable production companies in modern cinema. And while many projects under the Blumhouse umbrella have focused on a variety of genres, the company’s production of horror movies has obtained a strong following amongst horror fans and helped to establish the company’s credibility. Given how well these movies have performed in theaters, it’s certainly no surprise that Blumhouse has become synonymous with the realm of cinematic horror and produces films that viewers look forward to each year.

Founded by Jason Blum in 2000, the company has relied on low-budget funding and the utilization of versatile crews to create some of the most jaw-dropping horror movies that explore beyond the typical scope and tropes of the genre. With projects like They/Them and Halloween Ends still to come later in the year, here is our definitive ranking of the best Blumhouse horror movies thus far.

Kicking off the bottom of the list is one of the most heart-stopping horror movies that Blumhouse has produced. The Gift stars Jason Bateman and Rebecca Hall as Simon and Robyn Callem — an ordinary husband and wife who find themselves harassed by a man from Simon’s troubled past named Gordo. Over time, the audience eventually learns that Simon bullied Gordo when they were younger, and that Gordo is playing out a sadistic path of revenge against Simon. It’s a terrifying horror thriller that really helped to establish Blumhouse in the genre.

Who among us hasn’t been terrified of our presence on the worldwide web at one point or another? While 2014’s Unfriended did not gather a tremendous amount of praise, it still resonated with horror buffs across the globe and definitely ranks as one of Blumhouse’s best. The supernatural horror centers around a group of students that find themselves targeted in a Skype call by a deceased classmate after her suicide. While the movie showcases the toxicity of an overbearing online presence, the true horror is the step-by-step process of each student being picked apart.

It’s certainly no secret that found footage horror films have received lots of attention over the last two decades in comparison to other sub-genres in horror. Creep (2014) perfectly executed the creepy (no pun intended) found footage aspect, where a videographer named Aaron is hired to record the final days of Josef — a dying man with an inoperable brain tumor. The movie is largely considered to be a sleeper hit, where it gained a strong following on Netflix and has enjoyed success years after the fact as an unsettling film that instills fear in all of us — making it some of the best work from Blumhouse.

As underrated as a horror movie can get, Daniel Goldhaber’s Cam is simply not talked about enough. After garnering worldwide attention upon its release on Netflix, Cam has been included on many lists that feature some of the best horror movies from Blumhouse. The film follows an eccentric cam girl named Alice — known by her online alias Lola — who wakes up one day to find that her online presence and allure has been completely stolen. Madeline Brewer delivers a standout performance in an all-around great film that reminds us that Blumhouse is as successful as it is for good reason.

When it comes to Blumhouse’s more unconventional horror movies, Christopher Landon’s Happy Death Day earns its right to be included in this list. Considering the two previously worked together on Paranormal Activity, it comes as no surprise that the Groundhog Day-esque horror movie landed on its feet as well as it did back in 2017. The movie follows Theresa “Tree” Gelbman — a college student who gets murdered on her birthday and begins to wake up and relive the same day over and over again. The film did spawn a sequel, though it wasn’t as well-received as its predecessor.

What a perfect way to crack into the top ten with The Purge, which is easily one of the very best movies from Blumhouse. Perhaps one of the most intriguing aspects about the Ethan Hawke vehicle is that it presents the chance to actually happen one day — which is beyond utterly terrifying. The Purge follows a wealthy family during the night of the annual Purge — an event where all crime (including murder) is legal in the United States for 12 hours. The success of the first film eventually spawned several sequels, but the original movie still remains one of the best from Blumhouse and one of the best in horror.

One of the most twisted and unsettling movies in horror/thriller is simultaneously one of the best from Blumhouse. Starring modern scream queen Anya Taylor-Joy and James McAvoy, Split follows a deranged man who suffers from dissociative identity disorder. That deranged man, portrayed by McAvoy, kidnaps three young girls and holds them hostage in a secret lair. M. Night Shyamalan’s thriller successfully terrified audiences with its heart-stopping scenarios and standout performances from the main cast, and as a result, it would be criminal to not include Split on this towering list.

The Black Phone has been regarded as one of the best horror movies of 2022 and with incredible performances from stars Ethan Hawke and Mason Thames, it’s not hard to understand why. Scott Derrickson’s supernatural horror centers around a serial murderer who kidnaps young boys and holds them hostage in an isolated basement before killing them. Despite being the newest film on this list, The Black Phone perfectly showcased the horrifying truth of child kidnappings and the importance of a relatable main character who stands up for themselves.

Considering Mike Flanagan’s established success in horror, it comes as no surprise that his collaboration with Blumhouse would produce one of the better horror movies of the past decade in Hush. Home-invasion horror is insanely profitable (take The Strangers for instance) and always draws an audience, which proves to be even more effective with its unpredictable twist — the main character is deaf, and cannot hear the sound of a perpetrator stalking the outside of her house at night. Hush is not only bone-chilling and terrifying — considering it could actually happen — but it is solidified as one of the best from Blumhouse.

Before The Black Phone, Blumhouse and Scott Derrickson rolled out the terrifying red carpet for horror project Sinister. Although, instead of Hawke playing a sadistic villain, he portrays the relatable and sometimes naive protagonist. Sinister tells the story of Bughuul — an ancient Babylon deity that manipulates one child in a family and persuades them to kill the rest of their family to live with Bughuul for all of eternity. From heart-punching sequences to a gripping narrative that leaves you afraid of family gatherings, Sinister is surely some of the best work that Blumhouse has to offer.

As far as Blumhouse movies that knocked it out of the park go, The Invisible Man helps us crack our top five. Led by Elisabeth Moss’s unforgettable performance as protagonist Cecilia Kass, the Blumhouse horror is the perfect showcase of deceit and hidden secrets to protect our true identities. Cecilia is an architect who believes she is being haunted by her seemingly-deceased ex-boyfriend Adrian. Unbeknownst to Cecilia, Adrian is very much alive and well, carefully keeping a close watch on her as everyone believes her sanity is slipping. It’s a gripping thriller/horror that keeps us on the edge of our seats.

Let’s be honest, nobody expected Paranormal Activity to blow up as much as it did. But, with a movie full of lesser-known stars and a low-budget ballpark, it makes sense that Blumhouse immediately jumped at the opportunity to establish the film as a hit in horror — and funnily enough, it paid off. The movie follows a young couple who set up a video camera after experiencing supernatural occurrences in their home. Despite a lackluster budget, the film grossed an impressive $193 million and established itself as one of Blumhouse’s best projects, despite a few unnecessary sequels.

When you’ve got a movie about The Shape, it’s hard to discount the popularity that will follow. Under the direction of David Gordon Green, 2018’s Halloween successfully reinvigorated an otherwise lifeless franchise with a slew of pointless sequels. With Blumhouse’s help, Michael Myers returned to the big screen in a big way, where the success of the reboot has resulted in a green light for Halloween Kills and Halloween Ends, respectively. Blumhouse even managed to get the scream queen herself Jamie Lee Curtis on board, which is certainly no easy accomplishment.

Before The Conjuring universe put the horror genre in a chokehold, James Wan’s Insidious terrified audiences with its fresh perspective on the genre as a whole and showed the entire world why Patrick Wilson deserves a leading role. While Insidious eventually blossomed into a money-grabbing franchise, the original film began the terror that audiences have come to love over the years. The film follows Josh and Reinai Lambert — a couple who seek out the help of paranormal psychic Elise Rainier after their son Dalton unexplainably slips into a coma. Wan’s masterpiece is just as terrifying as it seems, and definitely one of Blumhouse’s best.

Without a doubt, Jordan Peele is one of the most versatile filmmakers in the realm of cinematic horror, and he certainly has the proof to back it up. Peele’s talent undoubtedly shined with his directorial debut in Get Out, which tells the story of a young black man who finds himself trapped in a secret operation run by the Armitage family members of his white girlfriend. Full of explosive realizations and unpredictable twists, Get Out proved to be an instant hit and spawned another successful film from Peele in Us, which Blumhouse also produced. The performances from Daniel Kaluuya, Allison Williams, and Lakeith Stanfield certainly bring the film to life, unequivocally making it the best that Blumhouse has to offer.