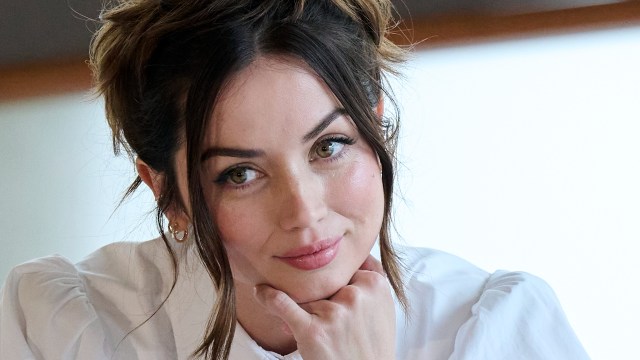 Ana de Armas is quickly climbing toward the peak of the best actresses out there.

No, she doesn’t need to “hold her own” opposite other big timers, but she sure does do that time and time again. Female, male, whatever—Armas in just about any role makes the movie better. Let’s go ahead and name those big timers she’s matched and even bested: Ryan Gosling, Jamie Lee Curtis, Daniel Craig, Chris Evans, Mark Ruffalo, Helen Hunt, Rosamund Pike, Clive Owen, Penélope Cruz, Robert De Niro, Jonah Hill, Wagner Moura, Bradley Cooper, and maybe this is dumb because her name belongs on that list.

The Cuban-born Armas belongs at the top of the list, as is evidenced by the directors, producers, and writers that entrust her to be bigger than whatever material and role she’s been given. Somehow her name being attached to a film hasn’t generated a ton of proper buzz before this year’s release of Blonde, and we really hope it’s not just that NC-17 rating or Marilyn Monroe mystique that’s doing so. As you’ll see from the list to come, Armas has been blowing the roof off, the doors off, and frankly, blowing the whole damn house to smithereens for quite a while now.

While her acting is only getting better, Armas has shown that she can bring out the best in a role and even shine while the rest of the show is dull. We sadly have a feeling that might be the case yet again in Blonde, but her performance might be enough to draw us in even if the rest of the film is said to leave a lot lacking and lagging.

Perhaps this movie didn’t resonate on a bigger level because it didn’t live up to all the bigger boxing movies and because boxing films in general were flooding the theaters for a while there. Yet, this biopic about Roberto Duran, in which Armas plays Felicidad, who had five children with Duran, is solid, it just doesn’t live up to other storyline boxing movies with better production and acting.

There’s an open marriage and murder, so suspense and chaos abound. It’s a bit of a hard watch. Armas brings more charisma and humanity to the role than it feels from the rest of the cast. Really, it’s just a bit of a sad, slow drag of a movie that will absolutely bum you out as it beats you over the head with tropes.

As you’ll see, Armas has kept busy these past few years, taking on roles big and small. The movie itself is better than some others on this list, but her role isn’t huge here, but she helps elevate the movie and those around her at every turn.

Somehow this is Armas in another loveless relationship movie. It’s a noble attempt to take on an actual tragedy and to bring to light some real issues, but the movie as a whole ain’t that great. Maybe it’s on us as the audience, trying to see Moura as someone else other than Pablo Escobar from Narcos. Once you get past that, it’s remarkable the level of chemistry the duo have on screen together. Armas still brings something bigger to the role and has you interested in what she is trying to portray, which can make it worth the watch.

Armas must have gone through a bit of a politico phase, or maybe she was drawn to real-life stories and wanted to present herself as a serious actress. Regardless, this is another movie based on a true story, and it stars Moura again, with Penélope Cruz in a leading role as well. Armas’ character is a tragic figure in the film again, and she brings the goods here in a powerhouse performance. The film is steady, just not overwhelming, and in the sea of Netflix, a movie must really stand out to gain a viewership (and that ever-important Netflix media campaign bump).

This one is better than you may remember. If you haven’t gotten around to watching this black comedy yet, it’s worth getting into for the performances alone. Let’s list the guys who know how to go over-the-top first: Jonah Hill, Bradley Cooper, Miles Teller, and Kevin Pollack. Yet here you have once again Armas damn-near stealing every scene she is in.

This was a toughie. Are we making a list of Armas’ best performances? Her best movies? Or is it the best movies on merit alone that she is a part of? However you want to boil it down, this may be her second-best performance ever (it couldn’t knock off number one, even with the Oscar buzz). Yet, the movie just leaves you lacking—and if it weren’t for Armas, this movie would be a lot trashier than it is.

We won’t go too far into the film since it just came out, and there’s plenty out there about it already Let’s just say she saves a film that isn’t worthy of being saved. Give Armas her due, and please give her better material to work with from here forward.

It was only a matter of time before Armas was given a film almost all to herself. That became the case this year with Blonde hitting theaters and Netflix. Here we have No Time to Die. To say that she’s perfectly cast in this role is underselling her talents, and it’s giving way too much credence to the “leading man needing a woman opposite him” trope.

She’s inching closer and closer to being a marquee draw. Those that are only seeing her in one or two dimensions need to fully embrace Armas. She has a subtly about her, a wicked sense of humor, and a grander than the role and the lines she’s given charisma. It would have film critics giving her a lot more kudos if she was some up-and-coming neophyte male actor like (no offense) oh, just insert any name here.

It’s kind of amazing that it took a second watch to realize that Armas in this role. In fact, the second viewing of Blade Runner 2049 brings out a whole lot more than the first time through (the same is kind of true of the original, too). She’s great here as Ryan Gosling’s holographic AI girlfriend with a heart and soul. The moment she glitches out in a romantic moment is a bit heartbreaking, in the way both Blade Runner films give soul to any and everything that exists, “real” or not.

It’s not the best movie, but Armas great in it. Actually, it’s pretty cool to see her opposite both Gosling and Evans again. The three of them have fun together, and there are some inside jokes there if you’re paying enough attention. It’s not often you get people playing opposite each other in quick succession, but such was the case here with the Blade Runner 2049 and Knives Out pairings.

Though this is a bit of a cheesefest of an action movie, isn’t that kind of what we are signing up for with some Netflix action flicks? Gosling does his quiet-with-a-flair-for-subtle-humor thing (really, has anyone been able to bring levity while saying so little?). Evans does his crazy, borderline-Nic Cage impression. Armas actually brings some originality to her role and portrays a bit of every character she’s ever played, without feeling played out.

In the past six years, she’s had a good or major part in 18 films (including Blonde). Knives Out was the best of the four movies she put out in 2019. Her character, Marta, portrays the antithesis of basically every other character in the film (save for maybe Daniel Craig’s).

Her gag as someone who, well, gags (and then some any time she tells a lie). Her barf is like Pinocchio’s nose. She holds her own amongst a cast of the starriest of stars, and somehow, the woman who literally is now playing a bombshell, is able to also play someone who is far, far away from owning her own sexuality. It shows not just her range, but also her ability to sink into a character. Big credit goes to Rian Johnson for seeing how awesome she’d be as Marta and putting her in position to show off all her talents.

We’re a bit bummed we won’t get Armas’ Marta again in the upcoming Glass Onion quasi-sequel, but that’s okay because we can just re-watch the original. It’s not often you know the ending of a suspenseful whodunnit and still want to sit through all of it again. For sure, that’s the case here with Armas leading the way.