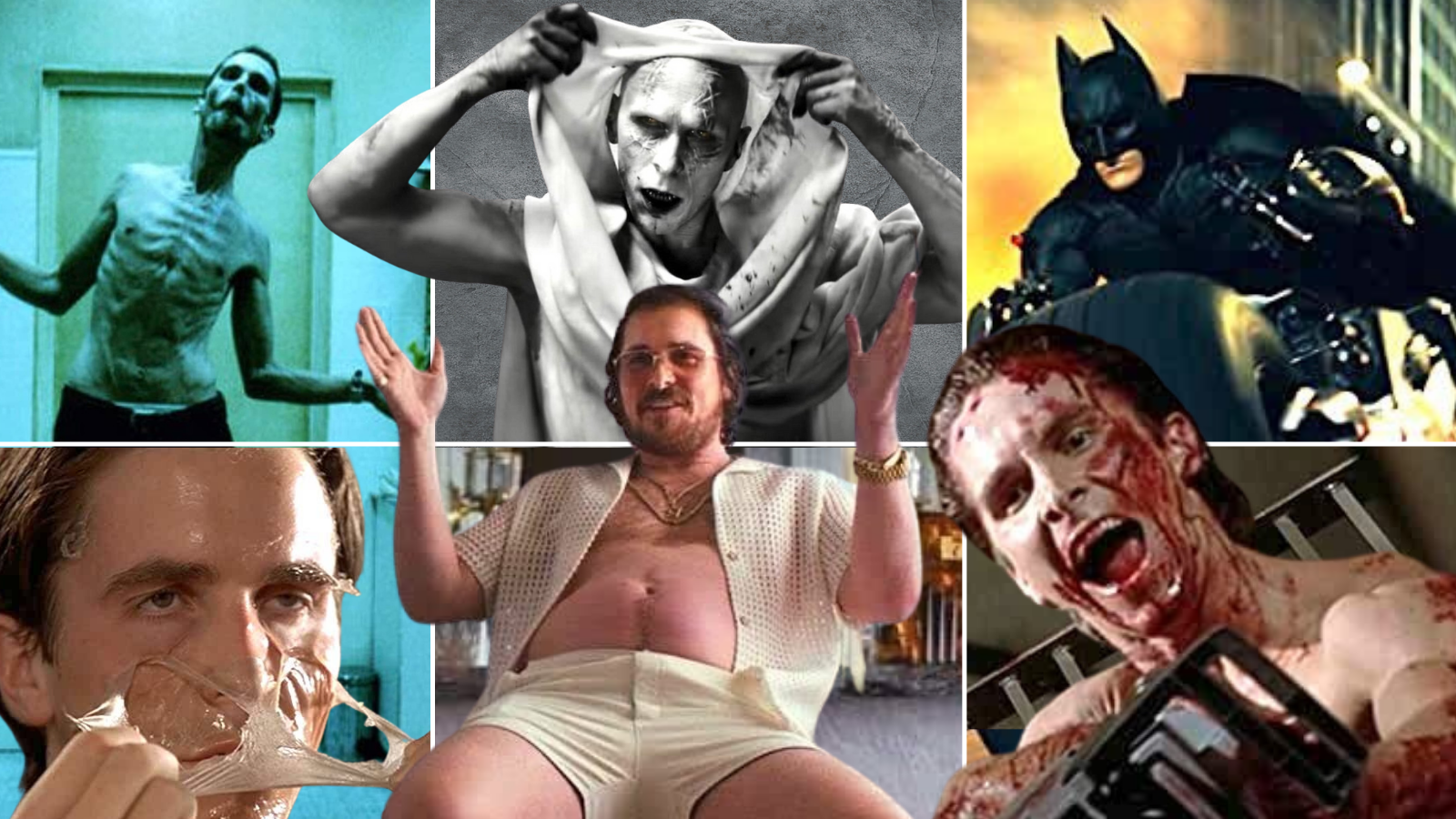 100 years from now, when it comes time to reflect on Hollywood’s finest actors, Christian Bale’s name will sit comfortably at the top of the list. Even now, three decades into his career, he has not only delivered some of the strongest performances in Hollywood history, but also some of the most popular films at the box office. He is regarded as one of the few actors who possess the rare ability to completely disappear into his roles, but what makes him truly noteworthy is the versatility he brings to every single character. If he’s not losing 62 pounds for a film, then he’s changing accents or globing heavy prosthetics onto his body. He is the king of transformations, after all.

With such a lengthy and highly-regarded repertoire of work, it’s hard to choose just a handful of his best films, but we’ve gone ahead and compiled our list of the top 10 Christian Bale movies of all time, including where we think his upcoming film Thor: Love and Thunder might land.

Steven Spielberg’s Empire of the Sun was Christian Bale’s first-ever movie, and what a way to come out of the gate running! The triumphant film follows a young boy named Jim (Bale) during World War II as he’s tragically torn from his well-to-do British family in Shanghai and sent to live in a Japanese internment camp. Bale famously beat out 4,000 other young boys for the role, and boy did he hold up against some of Hollywood’s biggest names at the time (we’re looking at you, John Malkovich and Miranda Richardson). It’s a stunning debut that still holds up today as one of Bale’s best films.

The Machinist is one of those movies that’s so bizarre, unsettling, and downright depressing that it’s hard to watch yet impossible to look away from. The psychological thriller stars Bale as Trevor Reznik, a machinist whose insomnia has resulted in a year of no sleep and terrifying hallucinations. Bale famously, and somewhat dangerously, lost an astonishing 62 pounds for the role, which he achieved by eating nothing but an apple and a can of tuna every day for four months. Many laud the film as one of his best, and while there’s no denying his commitment to the role ⏤ not to mention the quality of the film ⏤ his other films have succeeded in ways The Machinist couldn’t simply because of its deliberate dedication to the ending’s payoff that actually ended up coughing up less than it promised.

The economic collapse of 2008 is still a fresh wound for many, even after all these years, and The Big Short picks at that wound quite a bit. The true story follows the lives of a pair of individuals (Steve Carell and Ryan Gosling) who saw the economic decline coming long before anyone else did and bet against the housing market, making a fortune in the process. While viewers might find it difficult to follow all the economic jargon tossed around in the movie, once you get the hang of the train wreck that’s slowly unfolding, you simply can’t look away. Bale’s role as Michael Burry, a real-life eccentric genius hedge fund manager with Asperger’s Syndrome who predicted the crash, is one of his most fascinating. It’s a character that allows Bale to disappear into someone completely different yet again and lent itself to what has been remembered as one of his best movies to date.

Regarded as one of his more fun films, Bale stars opposite Hugh Jackman and Scarlett Johansson in Christopher Nolan’s The Prestige. The magic-centric movie follows two magicians (Bale and Jackman) who, after a tragic accident, become sworn enemies bent on destroying each other. It’s a complex film with numerous twists and turns that will keep you guessing until the very end, but what really makes The Prestige so great is Bale and Jackman’s palpable chemistry. They play off each other so well that it’s hard to believe they’re not actually mortal enemies in real life. And that ending? If you’ve seen it, you know what we’re talking about…

Might this be where Bale’s next film will land when Thor: Love and Thunder hits theaters on July 8, 2022? If the glimpse we got of his highly-anticipated new character Gorr the God Butcher in the above trailer is any indication, then yes, there’s a very good chance that Bale will help make Love and Thunder one of the best films in the Thor franchise (as hard as that might be to do following the epic success of Thor: Ragnarok). Even from the first five films on this list, we know how committed Bale is to his characters, and our first look at his Gorr is no exception. The character is already so popular that he’s become a meme and is being compared to villains like Voldemort and Palpatine. Knowing Bale, Gorr will be a memorable baddie in the MCU lineup and, if Love and Thunder director and co-star Taika Waititi has anything to say about it, the best one yet.

Bale reunited with director David O. Russell for American Hustle, a movie based on the real-life ABSCAM operation of the late 1970s and early 1980s. The con artist drama features an all-star cast including Bale, Amy Adams, Bradley Cooper, Jennifer Lawrence, and Jeremy Renner. It’s one of those movies where everyone is so good that it’s hard to pick a stand-out performance, but Bale’s portrayal of Irving Rosenfeld, a con artist who gets caught up in an FBI sting operation, is impossible to forget. Bale completely disappears into the sleazy character, complete with a potbelly, balding head, and combover. He steals every scene he’s in and fully immerses himself in the role, delivering one of the most memorable and enjoyable performances of his career.

The Fighter is based on the true story of boxer “Irish” Micky Ward (Mark Wahlberg) and his half-brother and trainer Dicky Eklund (Bale). The 2010 drama chronicles Ward’s underdog journey to the welterweight title, with Bale’s Oscar-winning turn as Eklund standing out as the film’s best performance. Eklund is a former boxing champ who’s struggling with addiction, and Bale completely disappears into the role yet again. He captures the highs and lows of addiction perfectly and his chemistry with Wahlberg is electric. It’s one of those rare cases where a supporting actor completely steals the show from the movie’s leading man, and Bale does it with ease.

Bale took on the iconic role of Bruce Wayne/Batman in Christopher Nolan’s 2005 reboot Batman Begins. The movie gave audiences a new and improved look at the Caped Crusader, delving into his backstory and providing some much-needed context for his vigilante ways. Bale was the perfect choice to play the brooding billionaire, bringing both the physicality and emotional depth required for the role. He completely transformed himself again for the part, packing on pounds of muscle and undergoing intense training in preparation. Mind you, this is a year after The Machinst in which he drastically lost 62 for the role of sleep-deprived Trevor Reznik. Talk about dedication. Batman Begins set the stage for what would become one of the best superhero films ever made.

Bale delivered one of his best performances to date in Mary Harron’s 2000 adaptation of Bret Easton Ellis’ American Psycho. The black comedy stars Bale as Patrick Bateman, a wealthy investment banker who moonlights as a serial killer. It’s a role that required Bale to be both chilling and darkly comedic, and he nailed it. His performance is so pitch-perfect that it’s impossible to forget, even if the movie itself isn’t particularly the strongest to ever hit the big screen. Regardless, American Psycho solidified Bale as one of Hollywood’s most talented actors, capable of disappearing into any role he takes on, and because of its iconic quality, we have to include it among the actor’s top three best movies.

When it comes down to choosing an almost perfect movie, Ford v Ferrari is an easy pick. The 2019 drama chronicles the true story of how Ford Motor Company took on Enzo Ferrari at the 24 Hours of Le Mans in France in 1966. The movie is packed with incredible performances, but Bale’s role as Ken Miles, a notorious race car driver hand-picked to drive a custom-made car created by his friend Carroll Shelby (Matt Damon) is a standout. He did not undergo any drastic physical transformations for the role, he did not adopt a new accent (we finally get to hear him in his native British tongue), and the movie doesn’t boast of CGI or action-loaded scenes. It does, however, have an impeccable script, crystal-clear direction, and a meaningful takeaway that leaves you happier than when the film began.

Of course, we couldn’t make a list of Bale’s best movies without including The Dark Knight, and there’s no better place for it then the top of the list. The 2008 superhero sequel is one of the best comic book movies ever made, and it wouldn’t have been half as good as it was without Bale’s performance as the Bruce Wayne/Batman. Heath Ledger may have rightfully won the Oscar for Best Supporting Actor for his unforgettable turn as the Joker, but Bale gave fans everywhere a main character we could all get behind, and the film remains not only the best in the Dark Knight trilogy, but what many fans deem the best Batman film of all time.

There you have it, the best movies Christian Bale has made over the course of his illustrious career. Will Thor: Love and Thunder stay where we’ve predicted it to land, or will it completely outshine Bale’s already-impressive list of iconic films? We’ll find out when Gorr the God Butcher slices his way across movie theater screens on July 8, 2022.