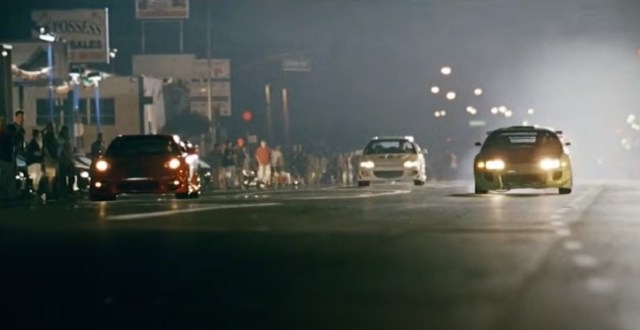 The excitement and rush of adrenaline from a race is like none other. And witnessing a race live, in-person is definitely quite an experience for anyone. But the high-speed and heart-stopping action among racers who only want to finish first has also made for fantastic experiences on the big screen.

The following movies, in no particular order, are the best racing movies of all time.

This funny film from 1976 centers on an illegal coast-to-coast race that prides itself on one rule: there are no rules. The motor marathon is set up by a wealthy businessman whose only reasoning for such an endeavor is simply — like many other really rich dudes in fiction — because he’s bored. To make things even more interesting, an LAPD detective travels just as far in an attempt to catch as many high-speeding cross-country racers as he can. This intriguing storyline is based on a real road race of the same nature and rivals the very similar Cannonball movies of the era. It also inspired a real-life (and more legal) Gumball Rally that has taken place internationally since 1999.

Tom Cruise is behind the wheel of this 1990 sports-action movie directed by Tony Scott, which draws heavily from the world of NASCAR racing. Also starring Nicole Kidman, Robert Duvall, Michael Rooker, and Cary Elwes, Cruise stars as Cole Trickle, a young racer who’s driven to reach the top of stock car racing. The fast-paced action and accompanying soundtrack by Hans Zimmer makes this one exciting to watch, even if you’re not as much a casual fan of the sport. Nearly every detail of the film, from corporate sponsors all over the racecars’ paint job to the fictional characters featured, was inspired by the real elements of NASCAR. Even real notable racing figures such as Richard Petty, Neil Bonnett, Harry Gant, Rusty Wallace, and Dr. Jerry Punch make cameos in the film.

This biopic from 2013 chronicles the historic Formula 1 feud between British driver James Hunt, played by Chris Hemsworth, and his adversary, Austrian driver Niki Lauda, played by Daniel Bruhl. Olivia Wilde and Natalie Dormer also star in the movie as two of Hunt’s many love interests. The film depicts the thrilling rivalry between both racers during the 1976 F1 racing season. And with a plot that includes aggressive driving, sex, drugs, fame, and fiery car crashes, the audience gets caught up in an exciting chain of events that’s hard to believe all happened in roughly one year. Like many other biopics, this one is especially noteworthy in that not only were replica F1 race cars of that era used in the production, but actual vintage ones were run as well.

This comedy-drama from 1996 stars Halle Berry in the lead role as an incoming teacher at a Hawaii high school who pushes a group of students to strive for intellectual success by competing in a solar-powered road race. The plot is loosely based on the true story of the solar car team from Konawaena High School, the first high school team to ever finish the World Solar Challenge. Getting a group of difficult teenagers with chips on their respective shoulders to cooperate for a common goal is the focal point of the inspiring plot. Audiences are along for the ride as they not just get their solar-powered “cockroach” finished, but form a bond that goes way beyond the racetrack they competed on. The film also features performances by then up-and-coming stars Eliza Dushku, Joel Edgerton, Casey Affleck, and Steve Zahn.

This pick from 1981, like The Gumball Rally, is a comedy-action movie that was based on a real cross-country outlaw road race. However, this production features an ensemble cast of big-name actors and actresses as the band of zany illegal racers who are literally trying to stop at nothing to win the race. It starred Burt Reynolds, Dean Martin, Jackie Chan (in only his second movie role), Roger Moore, Farrah Fawcett, Dom DeLuise, Sammy Davis Jr., and football Hall of Famer Terry Bradshaw, to name a bunch. Like the rival film, the race starts in the east and ends in the west. But it features campier action and humor, which genuinely makes it just as entertaining as the similar Gumball Rally in its own right.

The super-popular Disney-Pixar movie Cars definitely makes this list. Released in 2006, this story follows Lightning McQueen, an arrogant, hot-shot race car that’s right on the edge of superstardom. However, he undergoes a heartfelt tune-up in a long-forgotten town in order to understand what racing is all about. In the usual mesmerizing visuals that Pixar brings to their productions, the movie features a highly-detailed universe where the vehicles, big or small, are the living, breathing people. And sticking with the racing theme, legendary names in motorsports like Richard Petty, Dale Earnhardt Jr., Mario Andretti, and Michael Schumacher lend their voice talents in cameo roles. Like many of Disney’s films, it was widely successful and opened up lanes for sequels, video games, and countless other related productions.

Developed into a live-action movie from the popular manga and anime series of the 1960s, this pick from 2008 is a visual marvel to just sit back and watch. It was written and directed by the Wachowskis of The Matrix fame, so audiences know that they’re in for an aesthetically pleasing ride. It features an all-star cast featuring Emile Hirsch, Christina Ricci, John Goodman, Susan Sarandon, and Matthew Fox. Hirsch plays the titular role very well and is supported by great performances from all of his co-stars. Overall, it’s a great piece of work, even if it’s an unusual blend of live-action film with sharp yet vibrant anime-style visuals.

This biopic from 2019 tells the story of the legend of the Ford Motor Company’s GT-40 Mk II, the racing supercar that overtook Ferrari at the 1966 24 Hours of Le Mans race. Oscar winner Matt Damon co-stars as Carroll Shelby, with fellow Oscar winner Christian Bale portraying British driver Ken Miles. It’s an intriguing story filled with drama, humor, risk, and history that is shot wonderfully and is accompanied by a fitting musical arrangement during key scenes. After its release, the film earned numerous accolades including four Academy Award nominations, including both a Golden Globe and SAG Best Actor nods for Bale.

This movie from 2014 is based on the popular Electronic Arts video game series of the same name. However, this adaptation actually has a plot, something the video games don’t. Aaron Paul of Breaking Bad fame plays Tobey, the movie’s protagonist who goes up against Dino, a bitter racing rival played by Dominic Cooper. These two drivers headline an underground high-stakes circuit of supercars, just like gamers would find in each console title in the series. And just like the “Hot Pursuit” and “High Stakes” versions of the video games, the cops play an integral role in the movie’s storyline. Sadly, it hasn’t been received well by audiences; but if you like fast cars, this one’s a safe pick.

This 2010 Disney picture is somewhat of a “dark horse” choice, pun intended, as the only film on this list that doesn’t involve auto racing. Instead, this sports biopic is based on the true story of the legendary prize-winning racehorse and its owner, Penny Chenery, played by Diane Lane. In the film, you see how an unlikely owner and a veteran trainer, played by John Malkovich, work together to train one of the greatest racehorses in history.

Will Ferrell stars in this hilarious 2006 sports comedy about Ricky Bobby, a foolishly goofy NASCAR superstar competing against a rival Formula 1 driver, who’s surprisingly really good on the stockcar circuit. With fellow funnyman Sasha Baron Cohen as the antagonist, you know this NASCAR movie’s full of all kinds of down-south satire, slapstick, and gross humor, with a healthy dose of immature innuendo. And like Days of Thunder, several notable NASCAR figures like Jamie McMurray and Dale Earnhardt Jr. appear in cameo roles for added auto authenticity.

One of the coolest guys to ever drive a car, Steve McQueen, who also inspired the namesake of the Disney Cars’ Lightning, stars in this 1971 sports drama inspired by the real 24-hour race in Europe. McQueen plays Michael Delaney, one of the best LeMans drivers in the world. The movie focuses on Delaney’s persistence to compete in a dangerous sport that has already severely injured or killed fellow drivers he’s raced against. Much like the scenes depicted in Ford v Ferrari, the stakes are high as McQueen’s performance behind the wheel runs as only he had during his legendary career.

The classic Disney comedy centers around a Volkswagen Beetle, with inexplicable driving abilities that can overpower even the best racecar on the road. The special vehicle is lovingly named “Herbie” as its driver Jim, played by Dean Jones, seemingly wows racing fans by outrunning the competition in such an unlikely set of wheels. It was one of the more well-known live-action Disney films of its time, even inspiring four sequels and television productions over the course of five decades.

This sports-action film from 2001 stars Sylvester Stallone as Joe Tanto, a retired Indycar driver who’s brought back to the track to tutor a young superstar-in-the-making, played by Kip Pardue. Oddly enough, no one gets punched or killed, like you usually see in Stallone’s movies, but the thrill and dangers of high-octane motorsports are still very much at the forefront of this pick. Legendary actor Burt Reynolds plays a supporting role alongside Til Schweiger, Estella Warren, and Robert Sean Leonard. And yes, for the sake of realism, racing names like Mario Andretti, Juan Pablo Montoya, Dario Franchitti, and Tony Kannan are among many who make cameo appearances.

Before you wonder why just the first film from the entire Fast and the Furious franchise is on this list, please consider that while almost every entry boasts most of the same core characters and plenty of supercars to drive, the first movie is what started it all. It features, at its core, the prime concept that the later films seemed to “change lanes” away from – the passion of drag and street racing. Vin Diesel and the late Paul Walker co-star in the first of their several turns together, where the mantra then was “living life one quarter-mile at a time,” long before it was about “family.” And what also makes it so much more about racing is how so many cars are seen throughout the film. It’s rare to see a scene in this movie that doesn’t have a race car or even a tool for the said machine visible to the audience.