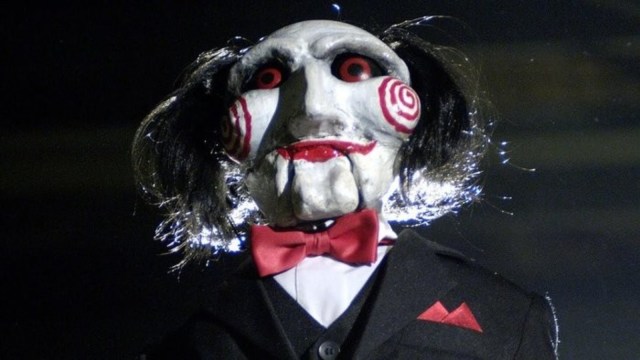 Many horror franchises revolve around a singular villain, whether it be Freddy Krueger, Michael Myers, or Jason Vorhees. However, there are a few franchises where a killer is aided by another, or after they die, another killer copies their gimmick and carries on killing in their name. More often than not these killers are the ones who operate behind a mask, hiding their identities for the sake of a whodunit. Saw is one of those horror franchises.

Featuring a number of killers who plot their gruesome traps to kill their victims, the Saw franchise has consisted of nine different movies and six different killers. Let’s take a look at everybody who took up the Jigsaw mantle, however temporarily, and rank them based on their impact on the franchise as a whole.

While he was inventive William Emmerson is easily the worst killer in the franchise. He was the main antagonist of Spiral: From the Book of Saw and was portrayed by Max Minghella. When Emmerson was a child, his father, Charlie Emmerson, witnessed an officer of the Los Angeles Police Department push a victim off the roof of a building. Charlie was willing to testify against the officer, but officers Peter Dunleavy (Patrick McManus) and Ezekiel Banks (Chris Rock) arrived to question him and Dunleavy killed him to cover it up. William witnessed his father’s murder and vowed to take revenge against the corrupt LAPD officers who were responsible for the corruption which ultimately killed his father. Changing his name to William Schenk he managed to enroll in the police academy and work his way up to working in the same department as Banks.

From there he began to kill the corrupt cops under the guise of a copycat Jigsaw. Ultimately Emmerson got the revenge he wanted and killed the corrupt cops with his traps, leaving Banks alive to mourn his father. Even though he managed to escape, live and reach his goals, the only reason any of his plans worked out was because of the incompetence of the officers he planned to kill. He also had no connections to Jigsaw other than adopting the moniker to lead the police in the wrong direction.

Logan Nelson was the main killer of Jigsaw, a film that was a sequel to the numbered Saw films while also being a prequel to the original Saw film. It was revealed that Logan (Matt Passmore) was a victim of John Kramer’s first test when he was still working out the kinks in his Jigsaw traps. The first trap failed and did not give Logan a fair shot at surviving, so John worked to save his life before taking him on as his first apprentice.

As far as his tenure as a Jigsaw killer, Logan was fine. He managed to set up his own traps and get a few kills as well as survive his film, something you cannot say about half of the killers on this list. But compared to those listed above him, Logan Nelson always feels like an afterthought because he didn’t really have any cool traps and his timeline does not overlap with the mainline Saw franchise, taking place before and after the main killings.

Amanda was the second killer introduced in the Saw franchise and she was portrayed by Shawnee Smith. She was first introduced in Saw and was later revealed to be helping John Kramer during the events of Saw II. Amanda was a drug addict who Jigsaw used as a test subject, setting her up in the reverse bear trap. After she survived she felt indebted to John Kramer and a type of Stockholm Syndrome took over. She donned the pig mask and helped John with his crusade.

Ultimately the reason she is not higher on this list is that at the end of the day she was only John’s accomplice, mainly carrying out the heavy lifting that he was no longer capable of doing. On the occasion that she did do the killing, she rigged the traps to kill their victims, rather than as a test like John had planned. On top of that, she failed the last test that she was a part of, did not listen to John’s final request, and was killed as a result. But you cannot deny that she impacted the franchise more than some of the other killers so here she sits at number four.

Mark Hoffman is the third-best killer in the franchise, not because he was the most creative or the one most dedicated to Jigsaw’s teachings but because he was the most ruthless. Hoffman stopped at nothing to continue John’s work, but that would lead to his own downfall. A police detective, Hoffman was recruited by John Kramer after he murdered his sister’s killer and staged the crime to look like one of Jigsaw’s traps. Hoffman continued John’s work after he died, carrying out his plans.

Hoffman helped John evade the police while also assisting in the traps and making them far more sinister than John had when he was still alive. But at the end of the day, like Amanda, he did not listen to John and his own ruthlessness proved to be his downfall. Killing Jill, John’s ex-wife, was the final nail in the coffin for Hoffman, who was abducted by Dr. Gordon and left to die.

Dr. Lawrence Gordon was played by Cary Elwes throughout the Saw franchise and he is second on our list. First appearing in the original Saw Dr. Lawrence Gordon was the first main victim of the franchise, and his actions (cutting off his foot with a saw) are what gave the franchise its name. After he cut off his foot John Kramer helped him, giving Gordon a prosthetic leg while treating his stump. Gordon, having survived the trap, then agreed to help John.

His impact on the franchise is nearly unmatched as he helped John Kramer with every trap after his own when he was needed. Out of Hoffman, Amanda, and Logan, he was the one who continued his legacy after he died, whereas the rest acted impulsively, ruthlessly, or out of revenge. There is no reason to think that Dr. Gordon was ever apprehended for his role in the franchise so not only did he manage to be impactful, and help John with his own medical skills, but he also got away with it.

The most iconic killer and the one who this franchise revolves around is the one and only John Kramer. Played by Tobin Bell through the Saw franchise, John was the one responsible for the iconic design of the puppets, and most of the traps like the reverse bear trap. John started working on his plans as Jigsaw after his cancer diagnosis, and after his wife’s unborn child was killed by a drug addict.

While some of the killers strayed from the path John had set, John’s intention was to rehabilitate those who had squandered their lives, by teaching them how much their life was worth. Even though the victims rarely ever came to the conclusion John wanted them to, you can’t blame a guy for trying to better the world, can you? Ultimately the top spot was never going to anybody but John Kramer because the franchise was built around him, and nobody impacted the story of the franchise more than he did.

With another entry in the Saw franchise currently in development, it is quite likely that they will be introducing another killer to join these trap maniacs. But as for how the new killer will fare compared to the rest of them, we will have to wait and see.