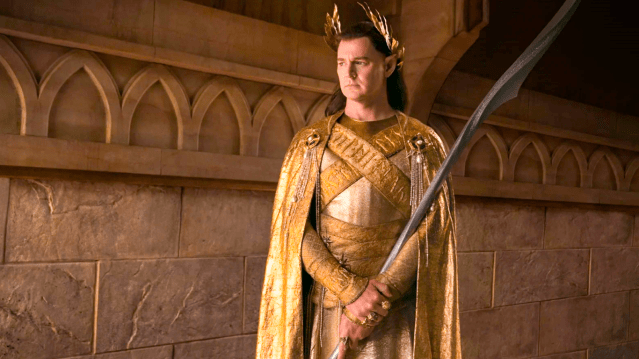 Image via Amazon Studios/Rings of Power (2022)

The Lord of the Rings: The Rings of Power takes place in the middle of the Second Age, which means that we’ll be introduced to a number of great characters from Middle-earth’s past. One of these is Gil-galad, the High King of Noldor, who fought Sauron and thwarted his plans numerous times throughout his life.

After the War of Wrath, Gil-galad settled in Lindon and founded a new kingdom there, which prospered from Greenwood all the way to the doorstep of the Misty Mountains. When Sauron invades Eriador with a great host and captures Eregion where Celebrimbor — the legendary elven blacksmith and the maker of the rings of power — resides, Gil-galad stands his ground at the Grey Havens and, aided by a fleet of Númenoreans from the south, decisively defeats Sauron and destroys his armies.

Sauron barely escapes the encounter with a small number of his bodyguards, which speaks volumes about the kind of badass Gil-galad is. Now, thanks to a profile on Nerdist, we have received a new look at the character (portrayed by Benjamin Walker) and his apparel in The Rings of Power. Check it out below.

The Rings of Power producers have planned a five-season arc for this ambitious live-action adaptation. Since Amazon only has the right to The Lord of the Rings appendices, a lot of the story material from the Years of the Trees and the First Age concerning the struggle between the Ainur and Melkor isn’t going to make the cut, but we still have amazing events such as the forging of the rings of power, the fall of Númenor, and the War of the Last Alliance to look forward to.

The show is making its long-anticipated debut on Sep. 2.