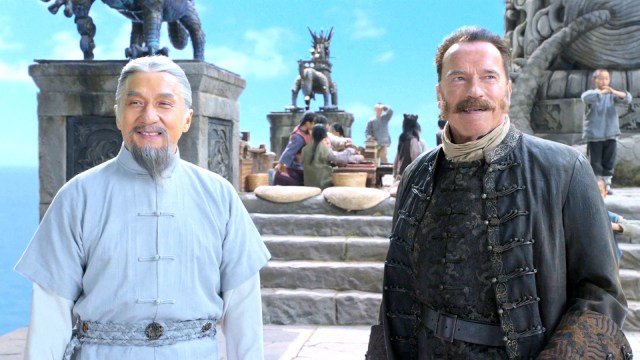 As two of the most popular, beloved, and iconic action stars in history that had never crossed paths in an onscreen capacity, most people would have pegged The Expendables franchise as the place for Arnold Schwarzenegger and Jackie Chan to come face-to-face for the first time. Instead, it happened in bizarre Chinese fantasy blockbuster Journey to China: The Mystery of Iron Mask.

To be fair, Sylvester Stallone did reach out to Chan every time he was assembling his latest band of aging ass-kickers, but the veteran daredevil wasn’t all that interested in getting several minutes of screentime and playing a supporting role alongside many of his illustrious musclebound peers.

He probably should have just agreed and done a cameo, though, because The Mystery of Iron Mask was a massive bomb that earned less than $9 million at the box office on a budget hovering around the $50 million mark, while reviews were wildly unenthusiastic to put it lightly, looking at the film’s respective critical and user ratings of just 22 percent on Rotten Tomatoes.

Then again, almost certainly due to the combination of novelty and curiosity factor that comes with seeing Schwarzenegger and Chan in the same frame, Journey to China has been going down a storm among streaming subscribers. Per FlixPatrol, not only is it one of the most-watched titles on the Prime Video global charts, the egregious commercial catastrophe is additionally a Top 10 hit in the United Kingdom.

It’s nowhere near a halfway decent or even moderately entertaining blockbuster, so it’s probably one for diehard fans of the legends, and not many folks beyond that.