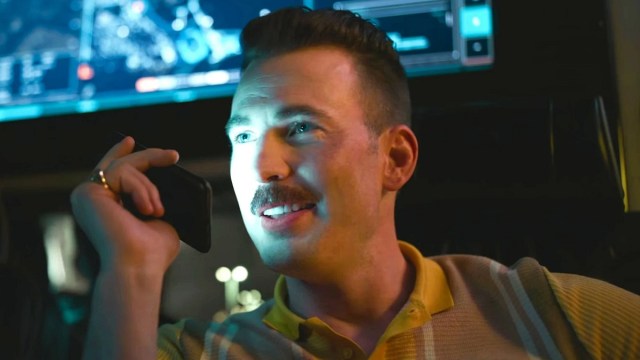 It’s not hard to notice the similarities between Captain America: The Winter Soldier and The Gray Man, and Joe and Anthony Russo confirm that’s not by mistake.

In an interview with Comic Book, Joe Russo explained how The Gray Man has been in the works ever since they were working on Winter Soldier.

In Winter Soldier, Steve Rogers (Chris Evans) learns that his presumed dead best friend, Bucky Barnes (Sebastian Stan), is actually alive and working as a brainwashed soldier for HYDRA. Captain America tries to capture him and bring back his old friend, and has the added pressure of defeating the corruption from within SHIELD.

In The Gray Man, Evans stands more firmly on the darker side of this cat and mouse game. He plays the psychotic CIA operative Lloyd Hansen, who’s on the hunt for his former colleague Court Gentry (Ryan Gosling), who defected from the organization, and it’s interesting to learn that had it not been for the Russo’s other MCU projects, this could’ve come out sooner.

While it’s easy to connect the two movies, they differ in significant ways. Anthony Russo expressed how impressive Evans’ range is, and that he wanted to utilize his acting chops for the new movie.

“Getting to work with Chris for so many years through those four movies on that specific character of Captain America was such a thrill. But of course, you know, we started to develop a sense of Chris is like, you know, his capacity as an actor clearly goes way beyond all the wonderful things he brought to that character. And we wanted to do something with him that, like, brought him as far away from that character as you possibly could. I don’t know if you could get farther away from Captain America than the character he plays in The Gray Man.”

The Gray Man will be able to go to darker places than the Russo brothers’ MCU offerings, and Evans won’t have the weight of having to uphold he stars and stripes with a role like Lloyd Hansen. The action-packed Gray Man trailer showed the mustached men going at it, and the maniacal glee that Lloyd has is a very far cry from Evans’ MCU days.