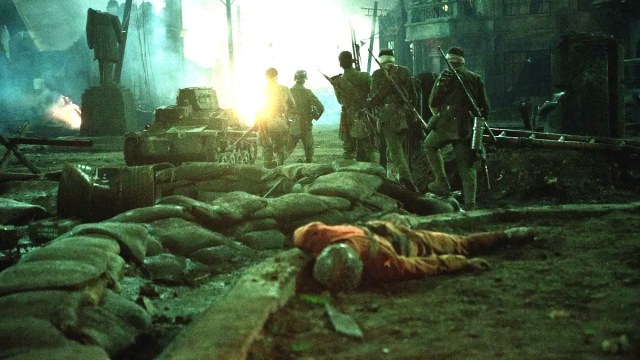 It would be selling things as short as humanly possible to describe 2020 as a year to forget, with the entire planet being ground to a standstill by the onset of COVID. The entertainment industry was almost completely crippled, so much so that theaters arguably still haven’t been completely restored to former glories. As a result, The Eight Hundred slipped almost entirely under the radar outside of its native China, in spite of being the highest-grossing release on the calendar.

Demon Slayer: Kimetsu no Yaiba – The Movie: Mugen Train may have earned more money in total by netting $506 million by the end of its run, but the anime sensation didn’t roll out to many international territories until the middle of 2021. By default, then, the $461 million accrued by co-writer and director Guan Hu’s World War II epic puts it at the top of the 2020 pile.

That’s more than Bad Boys for Life, Tenet, and Sonic the Hedgehog, which were the only three Hollywood blockbusters to even come close to drawing in the crowds, and two of them had the benefit of playing to packed houses before the pandemic hit. The Eight Hundred earned virtually every single penny of its takings on home soil, though, with a mere $372,000 coming from outside markets.

The acclaimed retelling of the titular number of soldiers trying to survive a warehouse siege in 1937 scored a strong 88 percent on Rotten Tomatoes, but Western audiences haven’t given it much of a second thought, at least until this weekend. Per FlixPatrol, The Eight Hundred has crashed right into Paramount Plus’ global rankings in 14th position, and it’ll have eyes on breaking into the overall Top 10 in the coming days.

The highest-grossing movie of any year usually wins plenty of attention and headlines, but the reasons why it didn’t happen in 2020 are fairly self-explanatory.