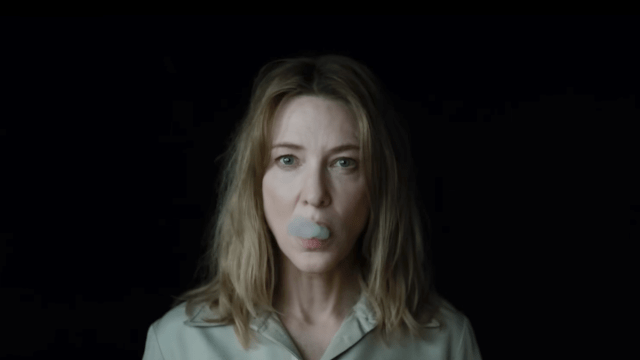 Cate Blanchett is, to put it simply, an absolute force of nature. This is truly an actress like no other, one who is able to play big, theatrical roles as well as she is able to inhabit small, subtle characters. Ever since bursting on the scene after her performance as the Queen of England in 1998’s Elizabeth, Blanchett has been one of the most powerful and successful actresses in all of Hollywood. 2022 seems poised to continue that dominance as Blanchett seems likely to once again be in the awards conversation, this time for her performance in one of 2022’s best reviewed movies, TÁR. In honor of this, we have ranked Blanchett’s ten best movies from worst to best. Enjoy!

The first movie on our list is a collaboration between Blanchett and Wes Anderson. The Life Aquatic With Steve Zissou is not the most accomplished movie Anderson has ever made but, like all of his films, it is not without its considerable charms. In it, Blanchett plays Jane Winslett-Richardson, a reporter writing a story about the titular Steve Zissou, an oceanographer who is mourning and attempting to avenge the loss of his partner. As would undoubtedly occur in real life, the men of the ship fall helplessly in love with Blanchett’s Jane, battling for her attention and respect in a decidedly slapstick manner. If you’ve seen a Wes Anderson movie you already know this is a delight for the senses; beautiful, whimsical, and overwhelmingly charming. It is of note, though, that Blanchett has yet to work with Anderson again, something that cannot be said for most of his actors and actresses.

As we will see, this is not the only time on our list that Blanchett will play a real-life figure. Here she plays none other than Katherine Hepburn, a rare example of an incredible actress playing an equally talented actress. Of course, The Aviator focuses far more directly on its subject, the mercurial pilot and filmmaker Howard Hughes (Leonardo DiCaprio). That said, Blanchett’s Hepburn is an essential piece of the film and Hughes’ first and arguably most lasting romantic relationship. It was for The Aviator that Blanchett won her first Academy Award in the Best Supporting Actress category.

Notes On A Scandal — based on a 2003 novel of the same name by English writer Zoë Heller — is a psychological thriller in which things bubble beneath the surface long before they burst. Blanchett stars opposite Judi Dench, the former a well-to-do art teacher named Sheba, the latter an aging, unmarried history teacher named Barbara. Barbara is almost immediately jealous of Sheba, a carefree and bohemian woman who seemingly does whatever she pleases. Yet, at the same time, she desperately wants to befriend Sheba, leaving her confused and frustrated by her own feelings. Eventually, we learn just how little Sheba concerns herself with what others think and so does Barbara, who discovers Sheba has been having a romantic relationship with one of her students. Predictably messy drama ensues, but the movie works best because of the skill of its two leads.

Blue Jasmine is most notable, perhaps, for garnering Blanchett her first Academy Award in the Best Actress category. In this Woody Allen-directed movie Blanchett plays the titular Jasmine, a Manhattan socialite who’s recent mental breakdown and financial troubles lead her to move in with her working-class sister in San Francisco. What transpires does not aid in Jasmine’s mental state whatsoever as each choice she makes leads her further and further astray. It’s a movie that slowly unfolds, giving us glimpses of the past that greatly affect the present and, eventually, the future. It is a demanding role, to be sure, and one that Blanchett tackles with incredible skill and nuance.

The Curious Case Of Benjamin Button is quite a movie when you consider the many famed and talented people involved in its creation. This is a movie directed by David Fincher, based on a short story by F. Scott Fitzgerald, with a screenplay by Eric Roth (Forrest Gump), starring Brad Pitt and, of course, Cate Blanchett. Whew! This thing really just had to be good and it very much was. By now you likely know the concept of this movie even if you’ve never seen the film. Pitt plays the titular hero of the story –a man who is born an old man and ages backwards, eventually becoming an old child. Throughout this tale, he meets and falls in love with Daisy Fuller, played as an adult by Blanchett. We won’t ruin any of the film’s narrative twists but is very much a movie focused on the romance and love between these two star-crossed lovers – which works particularly well when you have Brad Pitt and Cate Blanchett.

This is the movie where Blanchett first introduced her acting brilliance to the larger world, portraying Queen Elizabeth I of England, the ruler of England from 1558 to 1603. This movie tracks the early years of her reign, though they later made a less successful sequel tracking her later years in 2007. Blanchett is tasked with carrying the movie, which surely would not have worked nearly as well had someone else been placed in the role. Thankfully, she is able to fully inhabit the British monarch and give us one of the more memorable biopics of all time.

It was only after diving deeper into this list that we realized that it features both two Todd Haynes-directed films and two based on Patricia Highsmith novels. This is the first of the latter, and features an absolutely killer cast. First, you have Matt Damon as the titular Ripley. Then you have Jude Law as the fantastically named Dickie Greenleaf and Gwenyth Paltrow as his girlfriend Marge. And finally, you have Blanchett as Meredith Logue. What transpires is a take on deception, murder, and evil up there with the best of i’s kind, the beauty of its European setting matched by the wickedness of its characters.

This brand-new movie written and directed by Todd Field is getting a lot of awards buzz, as is its star Blanchett. Though the movie first premiered in September at the Venice International Film Festival it is only now rolling out in theaters. Which means we are all in for a treat as Blanchett undoubtedly gives one of the best performances of her career. She plays the titular Lydia Tár, a legendary composer who — while on the precipice of releasing her latest work — must navigate the pitfalls and dangers of fame. This is an epic film, clocking in at over two and a half hours, matched by an equally epic performance from Blanchett, one you surely need to see if you consider yourself a fan. As I said, this is no doubt a role that will catapult Blanchett directly into this year’s award conversation, possibly leading her to her eighth acting nomination, a ridiculously impressive number to be sure.

As previously stated, two of the movies on this list are directed by Todd Haynes. This is the first, a trippy, surrealist biopic of Bob Dylan, a man who defies explanation and so makes any attempt at depiction almost impossible. I say almost because of the job Haynes and, more importantly, Blanchett does here. This is a movie where multiple incredible actors set out to play Dylan – including Christian Bale, Heath Ledger, and Richard Gere. And yet, Blanchett outclasses them all in her stylized depiction. Yes, she too plays Dylan, crossing gender lines in a way that is neither distracting or superfluous, and showing him at his speediest and most neurotic, covering the period most memorably depicted during the 1967 documentary Don’t Look Back. It is truly a performance no other actress could have even attempted, much less pulled off so effectively.

2015’s Carol is, at its heart, a story of a passionate first love. It just so happens this love is between two women in the 1950s, meaning nearly every aspect of the relationship is left simmering beneath the surface. Blanchett plays the titular role in this, yet another Todd Haynes movie. She is a woman going through an acrimonious divorce, one she’s not handling all that well. One day, she meets Therese, a young unmarried woman played wonderfully by Rooney Mara. The too slowly fall in love though, again, this is not your typical romantic movie. Stray glances and charged moments are as subtle as they are moving to watch, each woman weighing the risk involved in such an illicit affair. None of this works without the incredible acting chops of its two leads who are fascinating in this low-key but wonderfully rendered film. And good news, you can stream this movie now on Tubi for free.