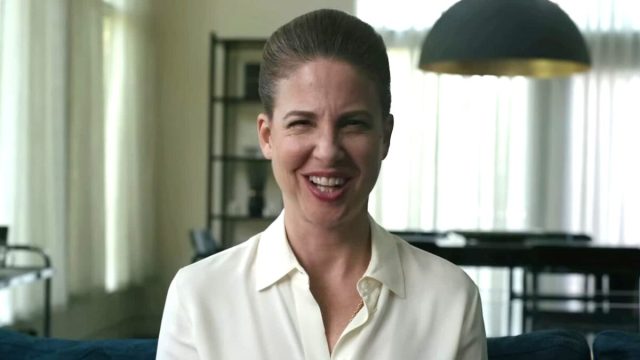 Smile is the surprisingly enjoyable horror film currently dominating at the box office. Despite not being the most original story, it has exceeded in delivering to audiences exactly what they expected from a movie during spooky season. However, one hanging thread from the film that was not fully addressed is the origins of the entity we finally see revealed at the end of the movie.

In the film, Sosie Bacon’s Dr. Rose sees a series of bizarre incidents after witnessing a patient’s suicide. An apparent curse causes her to see people around her wearing a creepy grin and committing unspeakable acts. This all culminates in a confrontation with an evil entity who at first appears like a deformed and taller version of her own deceased mother, known as Nightmare Mom (per IMDb). Then in the final scene of the film, the entity sheds this disguise and reveals its true form: a skinless quadrupedal monster known as The Monstruosity with its rows and rows of teeth that endlessly nest inside its mouth. The entity then crawls into Rose’s mouth, apparently possessing her, and she soon wears the same creepy grin that has been haunting her. She then lights herself on fire in front of her ex-boyfriend, passing the curse onto him.

What exactly is The Monsturosity? Let’s count down our top-eight theories about just what the entity is and where it came from.

8. The entity is an illusion created by an evil psychic

Perhaps in the world of Smile, powerful psychics exist who have to suck out the life force from others in order to continue to thrive. Perhaps the entity is nothing but a psychic illusion caused by someone with telepathic abilities like an evil Professor X from X-Men. The evil psychic’s targets could be selected for their background in having experienced trauma, and similar to Vecna in Stranger Things, the telepathic individuals kill their prey in order to make themselves more powerful. It could be similar to Doctor Sleep where there is a whole clan of these energy vampires who kill others in order to elongate their own lives. This could also explain why the “chain” of the curse gets periodically restarted. After the chain is broken, the psychic could simply locate another victim by searching for the psychic energy that is telegraphed when someone goes through a traumatic event. Heck, maybe Smile actually takes place in the same universe as Stranger Things, and this is all Vecna’s long-awaited comeback.

7. The entity is a ghost

In the tradition of J-horror films such as Ju-On and Ringu, perhaps the entity and the general curse is the result of a vengeful ghost. As to whom the original person was could be debated. Rose’s mother, played by Dora Kiss in Smile, could be the ghost who came back to haunt her own daughter due to Rose failing to get help prior to her mom’s suicide. Since it’s implied Rose’s mom was abusive to her and her sister, it would make sense if Dora became a menace in the afterlife. However, the ghost could be from some person completely unrelated to Rose and simply moves from one victim to the next in order to continue to exist in the afterlife. Either way, we’d love to see the backstory of the ghost if that is The Monstruoisity’s true origin.

6. The entity is from outer space

In addition, it could be that The Monstruosity is a more conventional alien creature, like a Xenomorph from Alien, but with psychic abilities. There is one moment in Smile where Rose views the security camera footage from a gas station in which the entity has possessed someone and made the victim kill himself. It would seem the alien may also have the ability to turn invisible like the extra-terrestrial from Predator. We can’t help but also wonder whether The Monstruosity’s ability to create despair-inducing hallucinations might make the entity somewhat similar in nature to the Despair Squid from the mind-bending episode of Red Dwarf season five, “Back to Reality.”

5. The entity is from another dimension

4. The entity is a demon

It could also be that The Monstruosity is actually a demon who is dispatched from Hell to torture people. This would have interesting implications for Smile, as it would mean the remedy for breaking the curse in the film may involve hiring an exorcist or two. Could we possibly have Ed and Lorraine Warren from The Conjuring universe make an appearance in a future Smile sequel or prequel? Only time will tell.

If we were realistically trying to find a logical explanation for the creepy visions and ultimate death experienced by Rose, we may want to take the medical mystery route rather than look for a cause in the supernatural realm. In fact, there is a tell-tale sign for a practical explanation that involves a seemingly innocuous detail from the movie: Rose’s cat.

In the film, Rose’s cat, Mustache, gets killed offscreen. The movie implies that Rose may have killed it under the power of the entity’s curse, since she inadvertently revealed the dead cat wrapped in a box as her present to her nephew. She was intending to give her nephew a typical kid’s toy, but somehow the contents of the box were switched around, and the dead cat wound up being the gift.

Maybe, just maybe, when Mustache goes missing earlier in the film, it is attacked by a woodland mammal who unfortunately had rabies and passed it onto him through a scratch or bite. Perhaps the cat actually passed rabies onto Rose at some point. With this explanation, Mustache’s injury could be explained by a larger creature that attacked it. He could have expired from the attack itself or from the disease. It’s also possible Rose did indeed kill Mustache, but in self-defense when it attacked her and gave her rabies.

From there, you could argue Rose succumbed to hallucinations, one of the symptoms of rabies, according to the CDC. The erratic behavior she engages in, like putting her dead cat in the gift box and not remembering it, might also be explained this way. This would also explain why Rose is haunted by bizarre incidents everywhere she goes, including people smiling at her, and the existence of the entity itself. Rose’s death may have been the literal suicide we saw her succumb to by lighting herself on fire in the movie or perhaps she imagined it and actually died of rabies.

2, The entity is a figment of Rose’s imagination

In our opinion, the explanation that truly makes the most sense within the world of Smile is that the bizarre occurrences that Rose is seeing throughout the film—including the entity itself—are the result of the “stress-induced hallucinations” that the character originally theorized as the cause of her troubles. Perhaps all of the events in the film, other than Rose’s mother’s suicide that she witnessed as a child, are simply occurring in her mind the entire time. Or it could be she really did witness the suicide of a patient, which triggered the memories of her mother to return. She was then traumatized all over again, causing the stress-induced hallucinations. Either way, the more supernatural moments that defy explanation occur after the patient’s death, so maybe Rose’s original diagnosis of herself was correct all along. While this is an explanation that is fun to think about rhetorically, we think it’s ingenious that the filmmakers left the ending ambiguous enough for other interpretations, including…

1. The entity is a figment of Carl’s imagination

Alternatively, the story may have also taken place entirely in the mind of one of Rose’s other patients, Jack Sochet’s Carl Renken. It’s apparent he was also experiencing some kind of bout of paranoia about people around him dying. Perhaps the story we see play out in the movie is merely the audience seeing the world around Carl through his eyes, giving us insight as to why he appears so distraught at the beginning of the movie. Thus, the dream sequence Rose experiences in which she imagines murdering Carl in order to break the curse was actually something he feared would happen to him and saw before him as a vision. Carl could have simply hallucinated that Rose was battling this curse as part of his symptoms. For all we know, the real Rose simply went on vacation, and that’s why she hasn’t been around the hospital lately. Perhaps Carl noticed she was gone, and the pain of being away from his favorite doctor triggered a hallucinatory nightmare where Rose is fighting for her life as a result.