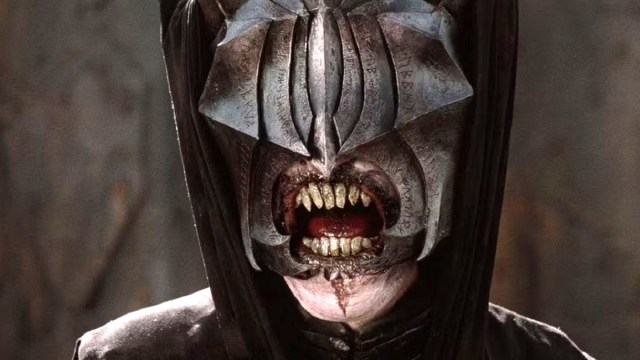 Tolkien’s Lord of the Rings is a world filled with numerous vile creatures, from the orcs and goblins to the cave trolls and wargs, there are plenty of beings who can terrify the pants off of you. But having found some test footage for one particular character from Return of the King, fans believe that this might be a step too far.

The character is the mouth of Sauron, whom many may never have seen before as he wasn’t released in the theatrical cut of the movie and only appears in the extended edition. Now, the character that actually makes it to the screen, played by the unrecognizable Bruce Spencer (Mad Max 2), is already pretty gruesome. The once Númenórean was corrupted by evil and joined Sauron’s side, learning dark sorcery and forgetting his own name.

Peter Jackson’s version looks like he desperately needs a dental hygienist and the open wounds around his mouth are something no chapstick is going to reverse. According to behind-the-scenes footage, it was said, “the idea that every time he spoke the language was so evil that it would crack the lips or the skin of his face.” The rest of the face is covered in a helmet that looks more like a torture device than a protective covering and his body is shrouded in black.

There was another design idea for the character though, as seen in this test footage that takes Mouth of Sauron and puts a new spin on it – literally. The footage, which the OP shared on Reddit, showed the mouth running vertically an idea Jackson had when he worried the character wouldn’t be scary enough, saying, “I was just trying to think of something that would make him unique and memorable.” Well, fans on this thread think it’s very memorable in a nightmare sort of way.

This is not an image you want in your dreams.

For this user, the design is a big old nope.

The final result looked great, this was just a step too far for many.

According to this post, the design is stepping a little out of the genre and veering into horror.

Many are happy that this was left on the editing floor.

Though one user reminds us that this would never have been the final look, it was simply a rush test idea.

This user does point out one benefit, all the better to eat tacos with.

Though this character didn’t make it in the theatrical cut, many fans of the extended addition footage love that he was included. Films are always testing ideas, and getting to see the process in these behind-the-scenes clips shows you just how many choices have to be made throughout the entire production, in this case, we are all glad Jackson stuck to the original design and left that creepy vertical mouth well alone.