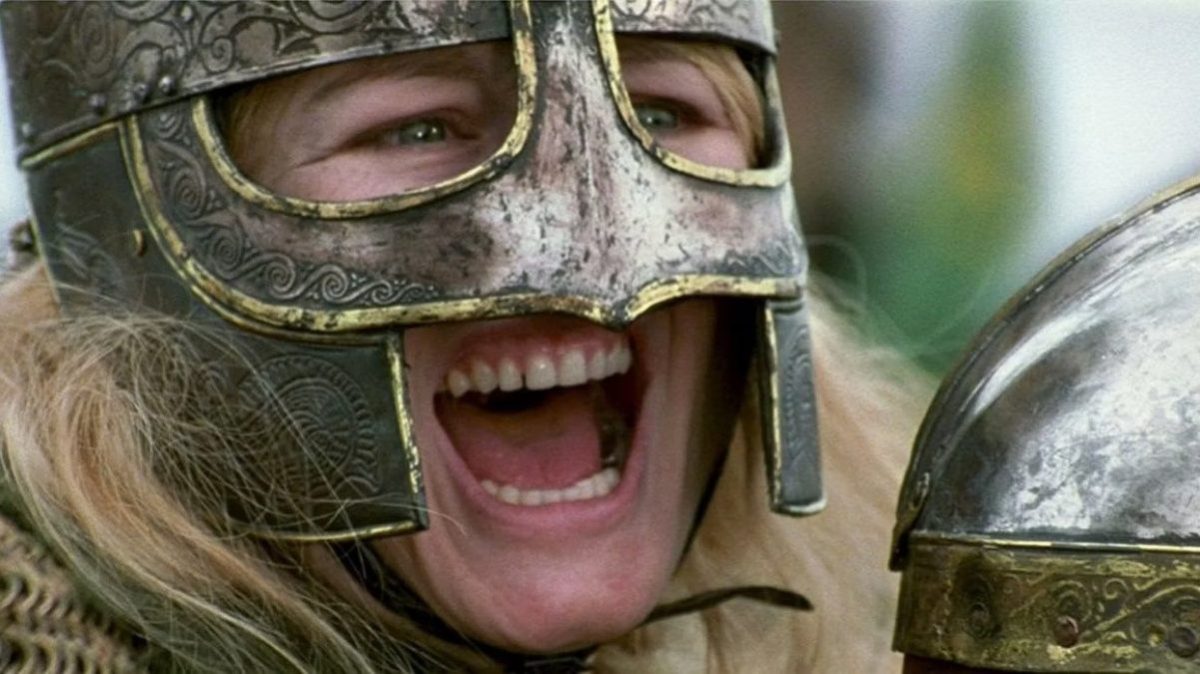 Popularized by feminist cartoonist Alison Bechdel in 1985, the Bechdel test gauges if a film has at least two named women characters talk to each other about something besides a man. This seemingly simple representation test is failed by nearly half of movies, many of which are intergender favorites. Here are 13 popular films that don’t pass the Bechdel test.

Despite containing some of cinema’s strongest female characters (literal superheroines), the first MCU Avengers fails the Bechdel test. Black Widow, Pepper Potts, and Agent Hill kick literal and metaphorical ass but never trade tongue lashings. The gals got garrulous for the sequels, all of which pass the test.

It’s often asserted that the entire LOTR trilogy fails the Bechdel test, but the admirably pedantic folks at Bechdeltest.com found that The Two Towers passes the test thanks to a short, sorrowful goodbye between a besieged Rohirrim mother and her fleeing daughter. That leaves The Fellowship of the Ring and The Return of the King as the Bechdel bombs. Both flicks have formidable female characters (Arwen, Galadriel, Éowyn, etc.) but they never interact with one another.

The girl with the dragon tattoo is also the girl who doesn’t talk to other girls. For two and a half hours, we watch the titular Lisbeth Salander hack her way into the pantheon of badass big screen babes while neglecting to converse with another named female. Possessing an antisocial personality in a male-dominated field may be the culprit, but it doesn’t prevent Lisbeth from having multiple conversations with other women in the 2009 Swedish version, causing that adaptation to pass the Bechdel test.

Yes, it’s The Lion King not The Human Queen, but the film showcases a few female felines and one girlboss hyena. However, they don’t have a conversation worthy of the Bechdel crown. The one fully-female exchange involves Sarafina and Sarabi, but they talk about Simba, a male. The original Bechdel test definition makes no mention of animals or children, but Bechdeltest.com judges females of all ages and species. Thus, it gave The Lion King an F.

Princess Leia is one of the greatest heroines in film history, yet none of her most iconic films pass the Bechdel test. The reason is simple: A movie needs two heroines to qualify. Granted, Leia isn’t the only woman in the original Star Wars trilogy (shout out to Aunt Beru, Toryn Farr, and Mon Mothma), but she has well over 99 percent of the dialog. That leaves little room for intrafemale conversation—in fact, it leaves nothing. There are no exchanges between woman characters in the entire OT.

Based on novels from the most successful female writer of all time and highly controversial J.K. Rowling, the Harry Potter films ace the Bechdel test—with one exception. The fourth installment, Harry Potter and the Goblet of Fire, fails on several technicalities. Bechdeltest.com user David explained them thusly:

“A lot of the female characters share scenes, but I don’t believe they ever have an actual conversation. Fleur and Maxime just share a few looks, Fleur talks in French to Gabrielle, but Gabrielle doesn’t respond. I don’t think McGonagall talks to any females, either. The closest I can think of is Parvati and Padma Patil have a couple whispered conversations, but they’re completely inaudible and (presumably) about Harry, anyway.”

Deathly Hallows: Part 2 was also considered a Bechdel failure. However, after years of debate, the final Potter flick got a pass due in large part to an exchange between Fleur and Hermione about clothing.

Popular movies have been unknowingly failing the Bechdel test for over 80 years. Case in point: Casablanca, the 1942 classic about an American club owner in Vichy-controlled Morocco who must decide between rekindling an old flame or saving her resistance fighter husband. His old flame is played by Ingrid Bergman, who co-leads the film and puts on a premier performance of the Old Hollywood era. Alas, her character monopolizes muliebral screentime, resulting in a Bechdel fail.

For Bechdel test/Pixar enthusiasts, Finding Nemo is about finding a conversation between females to give the movie a pass. It’s been a valiant effort, but, as of this writing, the A+ film has an F on Bechdeltest.com. One user cited an exchange between Deb and Peach about a dental procedure as potentially qualifying, but a different user countered that both the dentist and patient are male.

The Imitation Game perfectly exemplifies the Bechdel test’s necessity. It was nominated for eight Oscars, yet it botches female representation in the exact way the test was made to uncover. The two-hour film has one conversation between women, and it’s about men. Specifically, it’s Joan and Helen talking about Alan and Hugh. Joan and Helen are extremely intelligent characters performed by their actresses with immense skill, but they exist in a man’s world.

Joan and Helen shouldn’t be faulted for their setting, nor should The Imitation Game be faulted for accurately portraying WWII-era Britain and the marginalization of women at that time. In fact, no film should be faulted for failing the Bechdel test so long as the lack of chatty, independent females is artistically warranted. “You can certainly have a feminist movie where there’s only one woman—or no women,” Alison Bechdel told Vulture. “[The test’s] not meant as a serious metric.” Moreover, on Late Night with Seth Meyers, Bechdel revealed that her favorite film doesn’t pass her own test. That would be Groundhog Day, the 1993 Bill Murray banger about a weatherman stuck in the same day. Said day doesn’t have a noteworthy all-female conversation.