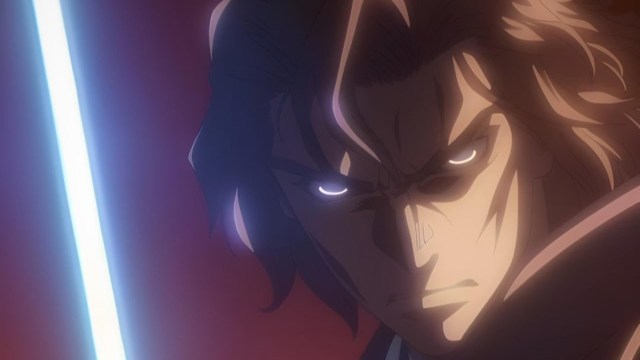 Over the last few years, Star Wars has been gradually establishing itself as a force to be reckoned with in anime. We recently got the adorable Grogu and Dust Bunnies short from Studio Ghibli, which was as brief as it was wholesome. More substantially, 2021 saw the release of Star Wars: Visions, an anthology show featuring work from multiple top Japanese animation houses given permission to go wild in a galaxy, far, far away.

Visions will be returning in early 2023 for a second volume, this time focusing on animation studios outside Japan from Japan, India, the United Kingdom, Ireland, Spain, Chile, France, South Africa, and the United States. Beyond that, there was recently a tantalizing visit to Neon Genesis Evangelion‘s Production I.G. from Dave Filoni and Kathleen Kennedy, though we don’t know what it was about.

But a new piece of fan art is making us crave something from the prequels. Check out this awesome image imagining prequel-era Anakin, Vader, Obi-Wan, Qui-Gon, Padme, and Maul in an anime:

Fan reaction in the comments is very positive, with most simply summarizing this as “badass”. Later in the thread artist @sneakygecko explains that these actually originate in AI art, though that image is then substantially edited and reworked in Photoshop to create the final product.

So far the official Star Wars anime projects have all been non-canon, though we’d love to see some kind of official prequel-era story done in this style. Sure, the adventures of these characters have been explored in detail in The Clone Wars, but there has to be room for just a few more stories.