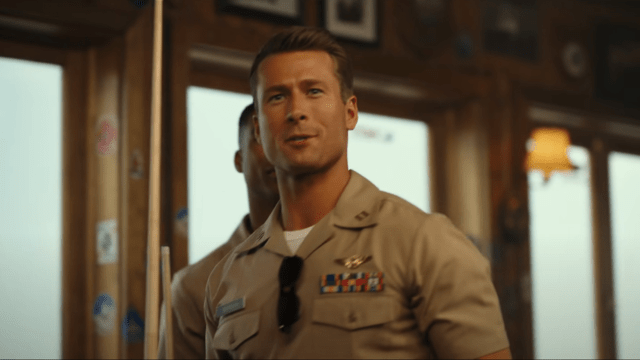 When it comes to 2022’s cinematic ladder, there’s very little separating the rungs of the ever-present superhero movies, the stupendously triumphant horror genre, the whodunit dark horses, and, interestingly, films that have to do with military aviation.

Indeed, out of every film that cinemas and streaming services were tasked with fielding this year, Top Gun: Maverick was perhaps the single most uncontested success story; grossing nearly $1.5 billion worldwide, Tom Cruise‘s passion project wound up being the most lucrative film of his career.

But in no way did he intend for Maverick to steal any degree of thunder from another aviation movie that happens to be making a bow this year; in fact, he was all too happy to make sure it had the tools necessary to succeed.

The tool in question was Glen Powell, who portrayed Hangman in Maverick and is also set to play the role of naval officer Tom Hudner in Devotion, where he will star alongside Jonathan Majors to tell the true story of two of the most celebrated American fighter pilots in the time of the Korean War.

In an interview with The Hollywood Reporter, Powell revealed that he had a few worries about the logistics behind filming two different aviation movies; worries that Tom Cruise quickly dashed by ensuring Powell that he didn’t have to pick and choose between the two projects.

I said, ‘Hey, Tom, I already have a naval aviation movie that’s really close to my heart,’ And Tom said, ‘There’s room for two. You can do Top Gun, you can do Devotion. You don’t have to choose.’

Devotion will release to theaters on Nov. 23.