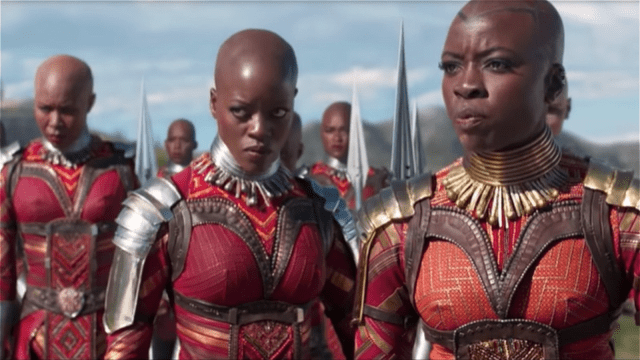 It’s no secret that Black Panther: Wakanda Forever will be serving up a healthy dose of the MCU‘s much-lauded action scenes and combat; the unshakable presence of the Dora Milaje, Wakanda’s elite all-female special forces unit, alone is enough to telegraph some of the most mesmerizing fight choreography to ever grace the franchise.

And among the Dora Milaje’s forces is MCU newcomer Aneka, played by the one and only Michaela Coel. And if this new clip of Wakanda Forever released on Twitter is anything to go by, we can be all but certain that Aneka will, in fact, destroy whatever adversary gets thrown her way over the course of the film.

In the clip, Coel’s Aneka, along with members of the Dora Milaje, can be seen easily dispatching a group of guards; evidently, Aneka will bring knives to a gun fight — and come out on top.

Nevertheless, Okoye, the leader of the Dora Milaje played by Danai Gurira, is quick to criticize Aneka’s weapon of choice, suggesting it disrespects the warriors that came before them, who chose the spear as the weapon of choice for the Dora Milaje. Knowing better than to trifle with Okoye, Aneka packs in her ego and nods her understanding to her leader.

Coel was fortunate to land the role of Aneka, who is one of the most intriguing members of the Dora Milaje as far as the comics are concerned. The character, a known rebel, was a former leader of the Dora Milaje in the comics, but was stripped of her title after murdering a corrupt Wakandan chieftan who was abusing women in her village. Later, she forms the Midnight Angels, an elite subgroup of the Dora Milaje who aided Deadpool on a mission to kill Doctor Doom.

With a talent like Coel behind Aneka, to say nothing of her ties to two of the biggest imminent MCU debutants in Deadpool and Doctor Doom, this clip may only be a taste of the role that Aneka will be playing in the wider scope of the MCU, and fans will surely welcome her with open arms, daggers or no daggers.

Black Panther: Wakanda Forever will release to theaters on Nov. 11.