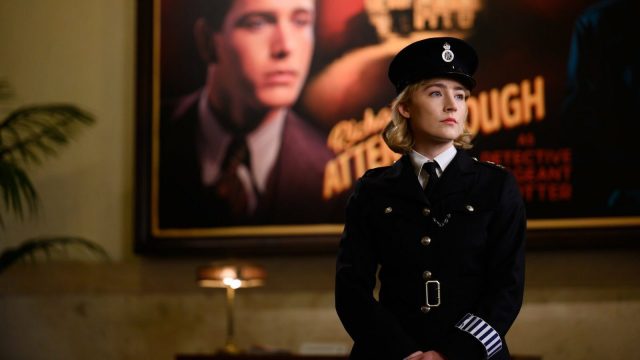 A good whodunit is a surefire crowd-pleaser, or perhaps we’re still caught in the midst of nostalgia for Knives Out and anticipation for its upcoming sequel, Glass Onion. Nevertheless, Saoirse Ronan and Sam Rockwell are primed to deliver a whimsical take on the genre with the upcoming film See How They Run, which just released its first trailer.

The trailer treats us to a backdrop of 1950s London, England, where a popular West End play is in the midst of being captured in movie form for Hollywood. But, once cast and crew members begin turning up dead, all eyes turn to jaded detective Stoppard (Rockwell) and his eager-to-a-fault partner Constable Stalker (Ronan) as they attempt to put an end to the theater’s slaughter-fest.

Ronan, in particular, seems to be leading the charge on the comedic edge this film is going for, with her kneejerk nature seeming to result in a myriad of awkward situations for Stalker and Stoppard. Also starring are Adrien Brody (The French Dispatch, The Grand Budapest Hotel), Ruth Wilson, Reece Shearsmith, Charlie Cooper, David Oyelowo, and Harris Dickinson as a fictionalized version of Richard Attenborough. The film also features a score by Daniel Pemberton (Spider-Man: Into the Spider-Verse).

There are few more entertaining bedmates than mystery and comedy, and if this trailer is anything to go by, it seems See How They Run is set to marry the best of both of these worlds, with a delightful pinch of historical fiction to go along with it all.

Produced and distributed by Searchlight Pictures, See How They Run is set for a limited theatrical release on September 30