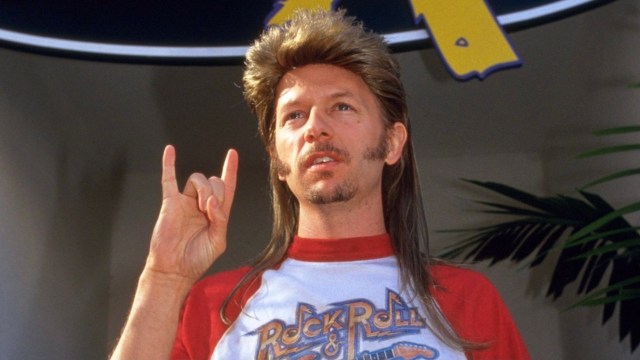 Joe Dirt is a slapstick adventure film that was released in April, 2001. The story revolves around the titular Joe Dirt — portrayed by the ever-so-sarcastic David Spade — who was branded a loser and a failure. While in search of his parents, Joe travels from one place to another, and over the course of the film, his better qualities are revealed, and he eventually builds his own new family made up of his close friends. The film took in average returns at the box office, scoring a little over $31 million against a budget of $17 million. Critically, the film was panned, and scored less than favorable reviews, but that didn’t stop Spade from embarking on a sequel, Joe Dirt 2: Beautiful Loser, fourteen years later.

As this hilarious comedy film has gained somewhat of a cult following, fans are wondering what the cast of the original film are up to today, as well as what other projects they have lined up.

David Wayne Spade is an American actor and comedian. After his debut in the fourth installment of the Police Academy franchise, Spade began a long run of comedy appearances, eventually making it big as a writer and then cast member on the long-running sketch series, Saturday Night Live. He has made a name for himself as one of Hollywood’s top comedians, starring in a number of television series and films. The four-time Emmy Award winner’s decade has been off to a great start, with hosting gigs on The Netflix Afterparty, The Circle Afterparty, and Bachelor in Paradise. Earlier this year, he released his first Netflix comedy special, Nothing Personal.

Brittany Daniel rose to fame in the mid-nineties starring in two popular teen dramas: Swans Crossing, which she starred with Sarah Michelle Gellar, and Sweet Valley High, where she acted alongside her twin sister Cynthia. She had a main role in the hit series The Game for its first three seasons, eventually leaving in 2011 due to her cancer diagnosis. Her career has slowed down since she recovered from cancer, and in an interview with PEOPLE, she revealed she became serious about finding a partner and having a child, and recently had a baby using her twin’s donor egg. She is one of the few cast members to return for the sequel, and most recently starred in the 2022 Cheaper by the Dozen remake.

Dennis Miller starred as Zander Kelly, the broadcast host that the lovable Joe Dirt airs his life story to. In reality, Miller is a multi-talented personality and is known for his endeavors as a writer, producer, comedian, actor, and political analyst. His other notable works include the films The Net, Murder at 1600, and What Happens in Vegas. He has several award nominations and is the recipient of five Emmy Awards. He was a television host on his show Dennis Miller + One on RT America, but after Russia’s invasion of Ukraine, has stepped down from the program.

Multiple award-winning actor and Hollywood icon Christopher Walken has had a prolific career for several decades. In Joe Dirt, he starred as a former mobster who is currently in the Witness Protection Program. The revered film and television star has been in countless projects over the course of his seven-decade run, and won the Academy Award for his performance in the 1978 war film, The Deer Hunter. Recently, he starred in the Ben Stiller-directed series, Severance, and is set to star as Shaddam IV in the upcoming sequel to Dune, titled Dune: Part Two.

Jaime Pressly is another multi-talented star that made up the cast of Joe Dirt. She has starred in numerous television shows, films, and music videos, and is also an accomplished model and fashion designer. She won an Emmy Award for her role on NBC’s My Name Is Earl, and garnered positive reviews for her role as Jill Kendall on the recently concluded sitcom, Mom. Her 2020s are off to a slow start, but she is slated to appear in another CBS comedy titled The Porch, as well as in the upcoming indie film, The Re-Education of Molly Singer, which is currently filming.

Robert James Ritchie, also known as Kid Rock, is an actor, rapper, singer, and composer who is known for his successful music career. As far as films go, Joe Dirt was his debut as an actor, and one of only a few films in his filmography. Earlier this year he released a single “We the People”, and later announced his twelfth studio album, Bad Reputation, which was released on March 21.

Besides Joe Dirt, which she starred in at just nine years old, Megan Harvey has appeared in one other film: Etienne! which was released in 2009. She has made a name for herself as a top voice actress, and for providing English language dubs of anime and video games. She recently took to her Twitter page to announce that she would be voicing Ringo in the Soul Hackers 2 game.

Golden Globe winner Fred Ward started his career in Italy as a mime before moving back to America and starring alongside Clint Eastwood in the prison thriller, Escape from Alcatraz. He became even more well known for his outstanding performances in Short Cuts, Tremors, Chain Reaction, Remo Williams, and True Detective. He died on May 8, 2022 at the age of 79.

Caroline Aaron has a ton of colorful performances under her belt since she kicked off her film career in the early eighties, and her television career a decade later. Aaron has appeared in many popular television shows, including Desperate Housewives, Curb Your Enthusiasm, The Good Fight, and most notably, The Marvelous Mrs. Maisel, which earned her a shared Screen Actors Guild Awards for Outstanding Performance by an Ensemble in a Comedy Series. She will star in the upcoming series, Chanshi and has been a guest instructor at HB Studio since 2020.