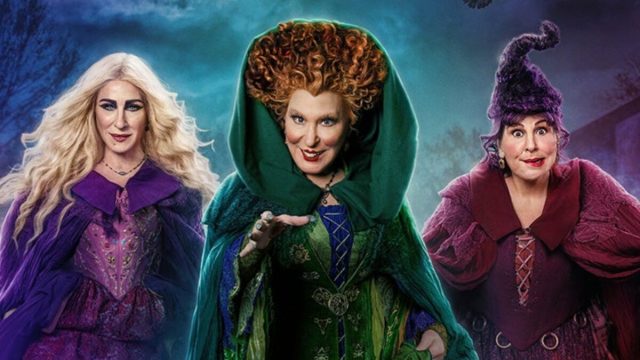 It’s almost here, finally the long-awaited sequel to Hocus Pocus is releasing tomorrow on Disney Plus! It’s been nearly thirty years since the first one released and now we’re going to see a brand-new generation of teens being attacked by the infamous Sanderson Sisters. Played by Bette Midler, Sarah Jessica Parker and Kathy Najimy, the Sanderson Sisters are witches that you do not want to come in contact with, especially during Halloween.

However, if there’s a promise of no witches or ghouls, would you be willing to put yourself in the movie? What if we told you there’s a way for super fans of Hocus Pocus or even just Halloween in general to stay in the Sanderson Sisters’ cottage? Deep in the woods of Salem, Massachusetts is an old cottage that’s been frozen in time. With squeaky floorboards, black cat decorations, a cauldron, and even cupboards with ingredients for a spell any witch might need when in a bind, this Airbnb is a near replica of the cottage from the movie.

The listing for the cottage even says it’s hosted by the Sanderson Sisters and the description reads as follows, “We’re back, witches. To celebrate our resurrection, we’re inviting guests into a land of enchantment with a stay at a recreation of our Salem cottage, where those with a penchant for mysticism can explore our spine-chilling haunt as All Hallows’ Eve approaches.” The hosts are really going all-in to make this feel like the real thing and even explain that all guests are responsible for their own travel, “by broomstick, or otherwise.”

As if that weren’t enough, the cottage also has activities lined up for its guests such as watching Hocus Pocus 2 in the Sanderson Sisters’ lair! For the full description and list of activities, check out the Airbnb listing. As for pricing, it’s $31 a night not including taxes and fees. Not a bad price for memories of a Hocus Pocus Halloween!