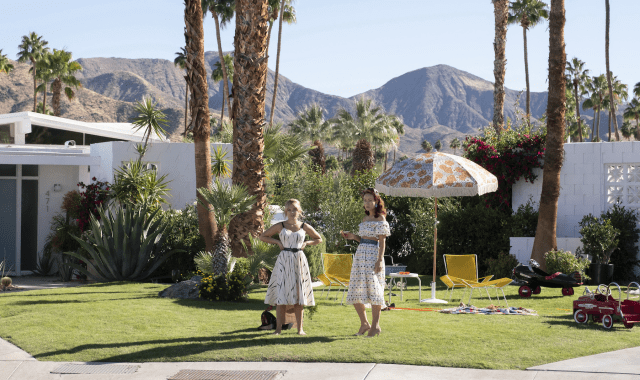 Don’t Worry Darling finally released to cinemas last week, and while Olivia Wilde‘s sophomore directorial venture may not be the Hollywood blockbuster hit of the summer, there’s very little doubt that it’s the Hollywood blockbuster story of the summer. Indeed, any film would take a 38 percent Rotten Tomatoes approval rating on the chin if it had to compete with the real-world shenanigans that took place on set. From Shia LaBeouf’s firing to the alleged feud between Wilde and lead actress Florence Pugh to the drama surrounding the real-or-imagined “spitgate,” the BTS drama took the cake for entertainment, however rotten.

Not everything behind the scenes brought out the worst of Hollywood’s spectacle. For what the film seems to have lacked in its execution, it was no fault of the gorgeous set design. Here’s the details behind Don’t Worry Darling‘s many stunning locales, courtesy of California’s wealth of storied architecture.

The site of the opening scene and residence of the Jordan Peterson-inspired Frank (Chris Pine) is none other than the Kaufmann House, a designated historical site located in Palm Springs, California.

Built in 1946 by Richard Neutra, the Kaufmann House is said to have helped define the modernist aesthetic of the city of Palm Springs, a feat infinitely befitting of the home of Frank, who is the founder of the “Victory Project” in the film.

Protagonist Alice (Pugh) and her husband Jack (Harry Styles) reside in a not-so-humble abode in the film. In reality, the scenes of their lodgings were taken from Canyon View Estates, a housing tract developed by architects Dan Palmer and William Krisel in South Palm Canyon Drive, California. If the many Google reviews of the community is to be believed, it evokes Victory to perfection.

Per Variety, production designer Katie Byron noted the particularly special task of designing on top of Canyon View’s architecture, remarking the whimsy that she was given the green light to utilize.

“There’s lots of little statues of animals and crystal birds and there’s a real playfulness with the aesthetic. She’s (Wilde) drawn to very special things. We would bounce crazy ideas off of each other, and we have a relationship where we feel brave and being able to to propose wild ideas. She’s one of the most visual directors I know. She really empowers us with understanding what the film is about, the real meaning behind it all, and then empowers us to make some crazy decisions.”

The Mojave Desert of Southern California is home to the Volcano House. First commissioned by architect Harold Bissner, Jr. as a private retreat for his client, it’s now owned by Chapman University, a private institution in Orange County, California.

The Volcano House is an absurdly remote location, with the film’s production team having had to deal with not only the handful of hours to just get there, but also with the unfriendly and at-times perilous road conditions along the way. Yet, it made its representation as the Victory Project’s headquarters all the more believable as a foreboding, antagonistic presence.

Rounding out the deep dive is downtown Los Angeles’ Cicada Restaurant and Lounge, which served as the site for Don’t Worry Darling‘s nightclub scenes. The historic and spectacular venue makes for limitless possibilities in the realm of chaos, which the film provides in spades.

It was this locale in particular that saw some of the film’s most palpable chaos, as described by Byron.