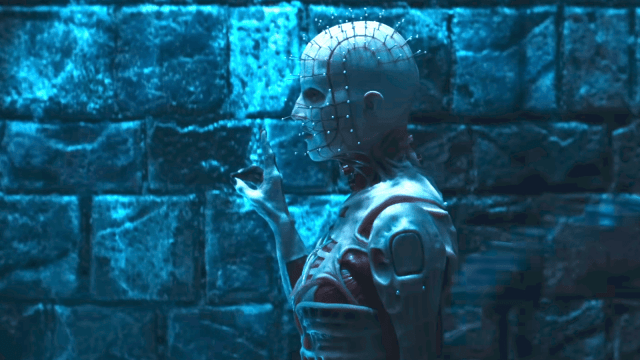 Warning: This article contains descriptions of body horror that may be upsetting for some readers

Springing from the mind of horror legend Clive Barker, the cenobites are the antagonists of the Hellraiser franchise. Mutilated and distorted, they are primarily presented as fallen mortals — humans whose yearning to test the limits of experience leads them into the cenobites’ path.

The Lament Configuration, an ornate puzzle box, is a gateway to hell for the misguided souls who fall into their grasp. By solving the puzzle box, which often lands in their hands with the telling words, “it’s yours, it always has been,” those mortals summon cenobites who drag them to Hell and an eternity of suffering, or as the demons call it, “pain and pleasure indivisible.”

Some are reluctant recruits, doomed to eternal suffering and desperate to escape. Others who take this dark path warm to it quickly as the heat of their mortal bodies fade. The most notable example of a former mortal who relished his new role is the Lead Cenobite, more commonly known as Pinhead. He took to his responsibilities as the Hell Priest of the cenobites with relish and some fine one-liners.

Like their franchise, the cenobites are difficult to, well, pin down. Drawing on a mixture of horror roots, they are unique in the genre. Despite some infamous drops in the quality of the franchise movies and different treatments of the cenobites, they have retained their particular appeal.

Director David Bruckner faced a challenge when he came to reboot the franchise’s reboot in 2022. How could Barker’s incredible creations be updated? Fortunately, he knew them inside out. “The Cenobites are so unique as monstrous creations. There’s such an irony to the imagery: It’s abhorrent, but they’re also gorgeous.” Bruckner told Salon.

“There’s a vanity and a regality, but there’s also something completely grotesque. It was a blast to kind of dive into that. I don’t know if we struck the right balance. You know, time will tell.”

In the event, the re-opening of the LeMarchand puzzle box in 2022’s Hellraiser was a success, adding a new texture to the demons while including what had made them compelling horror icons for the previous three decades. Why, then, are these horrific creations so uniquely terrifying? We have such sights to show you…

There’s a strong dose of classical mythology behind the cenobites. Like a Stygian ferryman, they arrive to escort souls to the afterlife, albeit with hooked chains rather than a boat. Like harpies, they relentlessly pursue victims who escape them. The mythology built around the cenobites through the movies, novels, and expanded media, is contradictory and convoluted. Still, it remains one of the most creative and compelling lore in horror.

The Hell of the cenobites is ambiguous but has often been equated with an evolved version of the Hell presented in Abrahamic religions. When Pinhead states that they are ‘Angels to some, demons to others,’ he’s not being utterly figurative.

In Hellbound: Hellraiser II, it’s easy to equate this with the Hell Dante presents in his Divine Comedy. There, layers of Hell are separated into segments where particularly horrible eternal punishment is enacted on sinners to match their indiscretions. In Hellbound, we enter a portion ruled over by Leviathan, Lord of the Labyrinth, where cenobites are a distorted result of the Hell god’s ordinance. His corrupted disciples guide new souls to Hell for conversion or stalk the Labyrinth to manage their victims’ good old-fashioned suffering.

The Hellraiser movie franchise is full of distortion. It was a refreshing horror when it arrived in movie theaters in 1987, to a scene dominated by slashers as the popularity of body horror was waning.

Cenobites are a transformation that represents death. We mainly see humans as cenobites, and on some notable occasions, we’re lucky enough to watch their grotesque change. It’s archaic, impossible, physical, and excruciating. Some are better prepared than others. Eliot Spencer embraced the role once the forces of Leviathan had reshaped his flesh into Pinhead.

Cenobite enthusiast Channard from Hellbound: Hellraiser II was too cowardly or incapable to complete the puzzle box. However, he relished existence after his transformation into a Lament Configuration sarcophagus. “To think I hesitated,” he says as he emerges as the Doctor, one of the most potent and intricate cenobites ever seen. Conversion is more than anyone can bear and survive, yet cenobites are dedicated to creating more of their kind and tasting unlimited mortal flesh.

Beyond the movies, a rich mythology has grown around Hellraiser, establishing Pinhead as a Hell Priest of the Order of the Gash, a cadre of demons dedicated to pleasure through pain. Rewriting flesh and existence in the image of Leviathan is the age-old struggle between order and chaos.

There are hints that cenobites are revolutionaries or an extremist cult that overthrew an old order. It’s a precept set down by Lucifer, whose rebellion and fall are a vital part of Clive Barker’s The Scarlet Gospels, in which the writer sought to kill off his creation once and for all. Rebellion against the creator’s design runs through Hellraiser, mainly in Pinhead’s scheming and ambitious attempts to increase his power and station.

In Hellraiser Bloodline, Pinhead updates the errant Princess Angelique when she observes things have changed during her 200-year absence from hell, having been drawn from the underworld in the first use of the Lament Configuration puzzle box. Things have become more ordered, Pinhead tells her. He later rejects her old-fashioned reliance on seduction and coercion,  as Hell now relies on pain and torture to exact results.

Angelique is soon disfigured to comply with Leviathan’s design. It seems a step back from her earlier transmutation, but cenobites were made to replace the medieval order. The idea that Hell is constantly developing and prone to technological and political changes like the mortal realm is terrifying. It’s not stuck in a fire pit of the Dark Ages.

Sex is built into Hellraiser. Greed and an insatiable lust for new experiences bring new victims to the cenobites. Undead Frank’s escape from hell in The Hellbound Heart manifests his sister-in-law Julia’s repressed passion. But in Barker’s hands, the metaphor of Hellraiser is more compelling.

The all-consuming and often insatiable quest for pleasure with dark consequences drew on Barker’s experiences as a gay man and continues to chime in LGBT communities. Inescapably, there are allegories for AIDs in a movie that emerged in the mid-1980s, along with the representation of sadomasochism and sexual destruction in a mainstream film.

Of all his horror peers, Pinhead boasts the largest single terrestrial massacre. Jason Voorhees would smash a space station in the preposterously watchable Jason X, but Hellraiser III: Hell on Earth lived up to its title. Freed of his human past, a raging Pinhead unleashes a destructive Hell on New York after escaping imprisonment in the Pillar of Souls.

Death is ambiguous in Hellraiser, where the existence of a corpse doesn’t mean the flesh of a victim hasn’t made it to Hell for eternal suffering or conversion into a cenobite. Pinhead doesn’t shy away from massacring hundreds of mortals in the Boiler Room nightclub and instantly converting some into garish cenobites.

For the above reasons and more, horror fans owe a lot to Clive Barker. The trailer for 1987’s Hellraiser included a familiar quote from Stephen King:

“I’ve seen the future of horror… and his name is Clive Barker.”

It’s an endorsement for which Barker, who had a few Books of Blood under his belt at the time, has expressed immense gratitude. The writer went on to leave an indelible mark on horror, from his role in bringing the biopic of Frankenstein director James Whale to the screen in Gods and Monsters to the socio-political movies that spilled from the Candyman of his short story The Forbidden and the Nightbreed of Cabal.

The cenobites remain Barker’s most familiar creation, and a part of their continuing appeal is that their creator has never given up on them. As the creator fell away from the movie franchise and Dimension Films commissioned low-budget installments to retain the rights, Barker never abandoned them. He shaped their journey the way he wanted as he took them to other media, crafted new stories in comics, and provided death for the Lead Cenobite in his 2015 novel The Scarlet Gospels. In 2022, Barker returned to help Bruckner guide a new generation of his most famous creations.