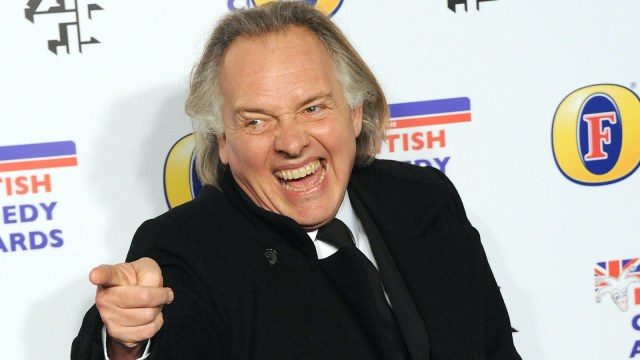 With source material as large and expansive as the Harry Potter novels, it was practically guaranteed that certain parts of the J.K. Rowling books wouldn’t make it into the movies.

Harry Potter readers especially held a sliver of hope that fan favorite character Peeves would find his way into the movies somehow. Alas, upon the release of Harry Potter and the Sorcerer’s Stone in 2001, Peeves the Poltergeist was nowhere to be found. When Chamber of Secrets released the following year, still, there was no Peeves.

It quickly became clear that the pesky poltergeist would never fly off the page and onto the silver screen as hoped. As it turns out, it wasn’t for lack of trying. The Harry Potter filmmakers did indeed find an actor to play Peeves, but the character never lived to see the light of day.

Who is Peeves the Poltergeist?

Peeves the Poltergeist was introduced in Harry Potter and the Sorcerer’s Stone as a noisy, raspberry-blowing nuisance who flew over the heads of students and caused mayhem and ruckus. While he didn’t propel the plot along in any substantial way, by the end of the series Peeves became as much a staple of Hogwarts as the moving staircase.

In J.K. Rowling’s 2016 e-book Short Stories from Hogwarts of Power, Politics and Pesky Poltergeists , Rowling describes poltergeists in a similar fashion to traditional folklore (ie: having a strong association to adolescents and teenagers). It only made sense that Peeves would be generated at Hogwarts, given how many teenagers came in and out of its halls over the centuries. Keep in mind, the word generated is the operative word.

Peeves is not actually a ghost, but a physical manifestation of all the mischievousness and trickery that happened at Hogwarts over its hundreds of years in session. In other words, he was created, and not a transparent imprint of a deceased witch or wizard as is the case with ghosts.

Sounds like a fun character to play, wouldn’t you say? That’s exactly what legendary British comedian Rik Mayall thought too when he was presented with the opportunity to bring the annoying poltergeist to life.

So, why was Peeves cut from the Harry Potter movies?

As it turns out, there was every intention in the world to have Peeves in the movies. Leading up to the first film’s release, respected British actor and comedian, Rik Mayall, was announced to play the part. Anyone familiar with his iconic catalog (The Young Ones, Bottom, and Drop Dead Fred to name a few) knew that Mayall would do the character justice, as his snarky wit and mischievous grin matched Peeves’ to a T.

When Sorcerer’s Stone released in theaters, however, Mayall was nowhere to be found. As it turns out the film’s director, Christopher Columbus, was reportedly unhappy with the overall look of Mayall as Peeves, likely due to the lack of visual effects technology available at the time.

Years after the release of Harry Potter and it’s unprecedented fame, an interview surfaced in which Mayall was asked about the best film he’d ever been in. In true Mayall fashion, he said Harry Potter because he never actually appeared in it.

Mayall goes on to describe his time on set, explaining that he was thrown off the set multiple times for causing a severe case of giggles among the child actors. Wiping his hands clean and calling in a good day’s work, Mayall returned home only to find out three weeks after filming that he’d been cut from the movie.

Unfortunately, after all these years, behind the scenes footage of Mayall as Peeves never emerged from any featurettes or DVD releases. Even more devastating, Mayall passed away on June 9, 2014, 14 years after causing a case of the giggles on the Harry Potter set.