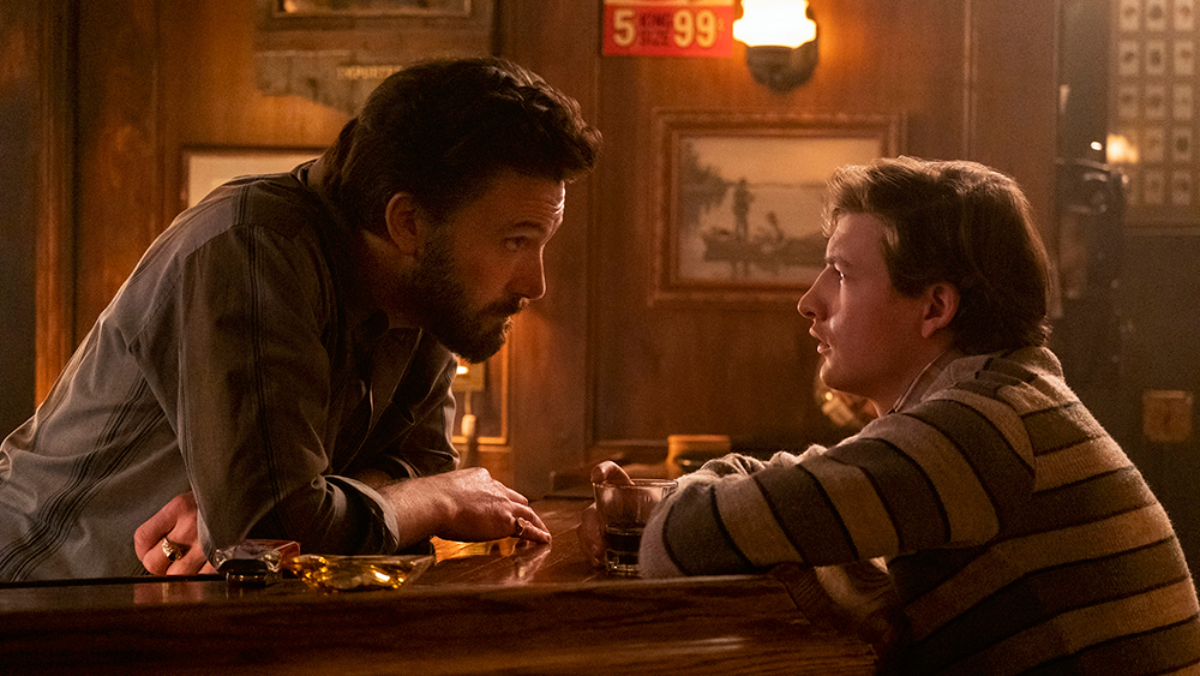 George Clooney’s The Tender Bar premiered on Amazon Prime this weekend. The film is based on the (more or less) real-life memoir of journalist J.R. Moehringer. It tells the story of his youth, first as a small child, initially played by young big-eyed actor Daniel Ranieri in his debut performance. His mother (Lily Rabe) who was getting no help from the unsupportive dad (Max Martini) found herself turning to her family for housing and help. Fortunately for young J.R., a father figure was available, although not a conventional one by any means; his bar owning, liquor swilling, nuggets of manly wisdom imparting Uncle Charlie played affably by Ben Affleck.

As the film moves on, J.R. gets older and is played by Tye Sheridan as he goes to college, falls in love for the first time, gets a newspaper job and generally grows up. The story is a big thank you to the writer’s real-life Uncle Charlie who was a formative influence on him in many ways. From teaching him to drive, to giving him advice about love, sports (you suck at it so maybe don’t try), family, and more, Charlie was always either at the house or waiting at his literature-themed watering hole, Dickens, ready to offer gentle encouragement or scolding as the case required.

But one more actor played the character of J.R. in the film and it’s one we never see. Similarly to The Wonder Years, the narrator is a considerably older J.R. looking back on his experiences and able to reflect on these memories we see being played out. If you saw this charming bildungsroman you may be asking yourself, who was that anyway?

The voice of elder J.R. was none other than actor Ron Livingston. One could certainly say that he is still best known for his iconic lead performance as Peter Gibbons in Mike Judge’s 1999 cult comedy Office Space. He also had a notable hit playing Rob, the best friend of Jon Favreau’s lead character in the 1996 film Swingers. In HBO’s award-winning Band of Brothers miniseries, he played Captain Lewis Nixon (and was nominated for a Golden Globe). More recently in 2013, he played the father living in the horrible house in James Wan’s 2013 horror film The Conjuring, as undercover Pinkerton detective Roy Phillips in HBO’s Boardwalk Empire, and as the private eye with an unfortunate end in HBO’s Search Party. Coming up you can see him in The Flash playing the superhero’s dad Henry, taking over for Billy Crudup who previously played the character.