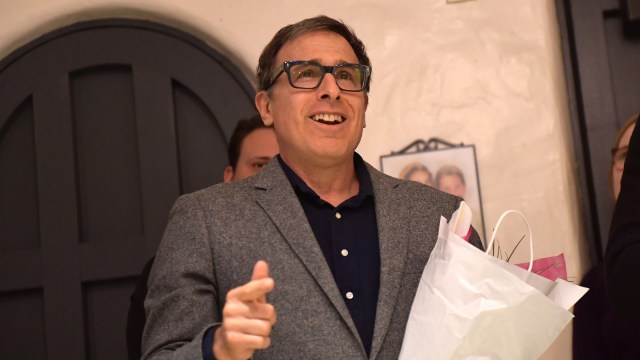 David O. Russell‘s films are a big deal when it comes to award seasons. The director, producer, and screenwriter has been nominated for five Academy Awards and seven Golden Globes throughout his career. Movies like 2013’s American Hustle, 2004’s I Heart Huckabees, 2010’s The Fighter, and 2012’s Silver Linings Playbook have attracted awards and phenomenal casts, including repeat collaborators like Jennifer Lawrence, Bradley Cooper, and Christian Bale.

But throughout his Hollywood career, there’s been a particularly Russell-shaped cost to his success. The filmmaker has courted controversy with his behavior on and off set. Each time a new Russell movie is released, the argument returns: How does the director still command so much power at the top of Hollywood?

Criticism was particularly acute in September 2022 when Russell released his first movie in nearly seven years. Amsterdam dominated Twitter, but not because of the ensemble movie’s impressive cast.

Russell’s repeated abusive behavior on set and assault accusations have movie fans calling out the industry for seemingly allowing his behavior to go unchecked for years. So why is Rusell so controversial?

It started on the set of Russell’s first big-budget movie. 1999’s Three Kings starred Mark Wahlberg and Ice Cube, but it was George Clooney who came to blows with the director.

A year after the movie’s release, Clooney told Playboy that working with Russell was “truly, without exception,” the worst experience of his life. Clooney described how he had confronted the director over his abusive behavior towards crew and extras on set, which peaked during a particularly high-pressure scene featuring helicopters and hundreds of extras. Clooney described his attempt to have a reasonable word with the director only for Russell to headbutt Clooney.

Clooney and Russell have apparently cleared the air in the two decades since, but the hostility was carried through interviews for quite a few years. Russell reportedly set a high price tag to work with the actor again, and Clooney told Playboy, “Life’s too short.”

Hollywood legend Lily Tomlin was on the end of a Russell tirade five years later during the making of what sounds like Russell’s most difficult movies, and this time it was caught on tape.

A 2004 video from the set of I Heart Huckabees showed Russell verbally abusing Tomlin. He’s seen screaming sexist obscenities while marching around the set and almost wiping out a crew member when he threw the contents from a desktop in rage. It’s an impressive tirade of swear words that put everyone firmly on Tomlin’s side.

In 2011, Tomlin told Movieline that she and Russell had eventually worked through their differences, but there were signs that Russell’s reputation was starting to plague him. When the director attended the 2012 Gotham Awards to pick up a special Tribute career award, he first had to sit through host Mike Birbiglia reciting the whole on-set tirade, expletives and all. Russell later responded by saying, ‘I just say you have to laugh at all that stuff. You have to laugh at it.’

That Gotham tribute award was handed to Russell by Amy Adams, the lauded actor who had worked with the writer-director on 2010’s The Fighter and was filming what was probably her last movie with him.

Russell’s treatment of Adams on the set of American Hustle was revealed in 2014 as part of the huge Sony Pictures hack. Emails showed that Russell had abused Adams on set so much that co-star Christian Bale had to step in. One transcript leaked by the hack described Russell’s behavior, including swearing and physically assaulting crew members, as “extreme even by Hollywood standards.”

Adams confirmed that Russell had made her cry nearly every day while making the movie, describing herself as “devastated on set.” She described her co-star Jennifer Lawrence as “Teflon.” That’s a term many may think is best applied to Russell, but in any event, it’s not a ringing endorsement considering Lawrence and the director’s frequent collaborations. Adams added, “Life to me is more important than movies.”

I Heart Huckabees may be an incendiary peak for Russell, with accusations that have followed him for nearly two decades. Rumor has it that Russell was angered when Jude Law jumped from the film during pre-production and saw his chance to confront the director of the movie Law had signed to at a party. That director was Christopher Nolan, who was warming up the cameras on his thriller Momento. Russell allegedly humiliated Nolan, putting him in a headlock in front of the guests and demanding that he release Law. Apparently, Law was back in the Huckabees’ cast within days.

In December 2011, Nicole Peloquin filed a police report claiming Russell had groped her in a Florida gym. Then 19, Peloquin was Russell’s transgender niece, and the incident triggered some uncomfortable finger-pointing. Police reports of the incident confirmed that Russell admitted that inappropriate touching had occurred, with the director claiming his niece had been provocative and invited him to touch her breasts. Despite Russell’s admission, the assault case was closed with no charges filed due to a lack of witnesses, as reported in the Chicago Tribune. Like many of the scandals linked to Russell, it didn’t disappear, and details were some of the most jaw-dropping moments to emerge in the 2014 Sony Pictures hack and leak.

The 2014 Sony email leak revealed Russell’s conduct on the set of American Hustle but also Sony’s concerns that the movie hadn’t delivered on its award promise — picking up 33 of 151 nominations but converting none of its 10 Oscars nods.

There may well be more stories to emerge from the interesting production of Amsterdam, a shoot delayed by the 2019 COVID-19 outbreak. There’s no suggestion of improper conduct on set, but the film only wrapped when police stepped in to shut down production after exceeding its filming permit.

Amsterdam’s immediate story was that social media juggled the movie’s mixed reviews — possibly the most mixed of Russell’s career — with shock that the filmmaker is still operating at such a high level in Tinsel Town. Those questions will be asked every time Russell releases a movie, so those reviews will likely be under even more scrutiny.