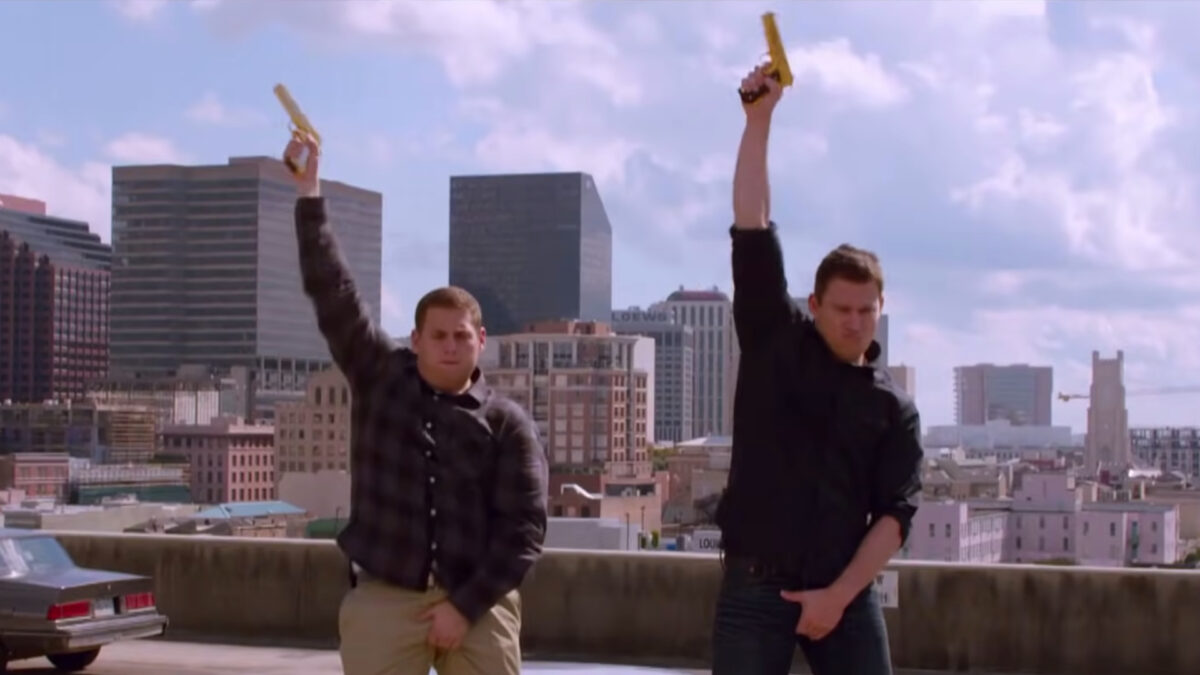 In the years since 22 Jump Street was released, little hope has persisted that the buddy-cop films would see a third installment.

While rumors of a 23 Jump Street did swirl in the years following its predecessor’s release, no concrete news or announcements regarding a third part ever followed. Hype gradually faded, fans began to look on the franchise as a completed duology, and any word of a third film became scarce.

That is, until a 2021 interview with Rodney Rothman, the co-writer and co-director behind Spider-Man: Into the Spider-Verse. Rothman revealed that he’d been tapped to work on the next film in the Jump Street franchise, but the details aren’t exactly what you’d think.

What happened to 23 Jump Street?

For years following 22 Jump Street’s release, news of a follow-up swirled among fans. Despite the second film’s tongue-in-cheek reference to Hollywood’s insistence on ruining franchises with endless sequels, a third film was reportedly in development between 2014 and 2016. The concept behind the movie is actually pretty enticing, with the intent for 23 Jump Street to crossover with the Men In Black franchise. This idea never came to fruition, but consider us interested if it ever does.

At the same time the MIB/Jump Street crossover was being considered, plans arose for a spin-off film starring female characters. Tiffany Haddish is — or at least was — attached to the project, with discussions of adding Awkwafina to the team. While similar projects — like the all-female Ghostbusters — have largely been considered utter failures, a Haddish/Awkwafina pair-up seems guaranteed to succeed.

The female Jump Street film hasn’t been officially scrapped, but there’s very little news regarding its development. Another film in the franchise is actively in the works, however – it’s just not called 23 Jump Street. Instead, the team seems to have skipped over the obvious number completely, instead initiating work on 24 Jump Street.

Rothman confirmed the existence of 24 Jump Street in his 2021 interview, noting that he’d been attached to write and direct the film, according to Looper. He noted, when asked about the name, that “it’s taken us so long to pull together we decided to skip over 23 Jump Street and pick up the story one movie later.”

That being said, a 23 Jump Street could still happen. Particularly if 24 Jump Street ends up following a new cast of characters, the dream of a MIB/Jump Street crossover could still come to fruition. This is a hope that Phil Lord, co-director of the first two films, is holding on to. He told We Live Entertainment that he and producer Christopher Miller are “reserving 23 Jump Street,” indicating that the film could someday come to pass.

It turns out the all-female spin-off and 24 Jump Street may be one and the same. The all-female spin-off was reportedly turned into a numbered sequel, according to Looper, and given the title Jump Street: Now For Her Pleasure. Zendaya has been tapped to star alongside Haddish, but Awkwafina’s involvement has yet to be confirmed. The film will reportedly star Haddish as an undercover cop posing as a high school teacher — a far more believable approach than inserting her as a student — and will attach several stellar female writers to the crew.

Longtime Bob’s Burgers writers Wendy Molyneux and Lizzie Molyneux-Loeglin are set to write the script, a job they balance alongside writing for the third Deadpool film. We’ve yet to learn if either Channing Tatum or Jonah Hill will return to their former roles in the third film, but hopes are high that they’ll at least show up to pass the torch.