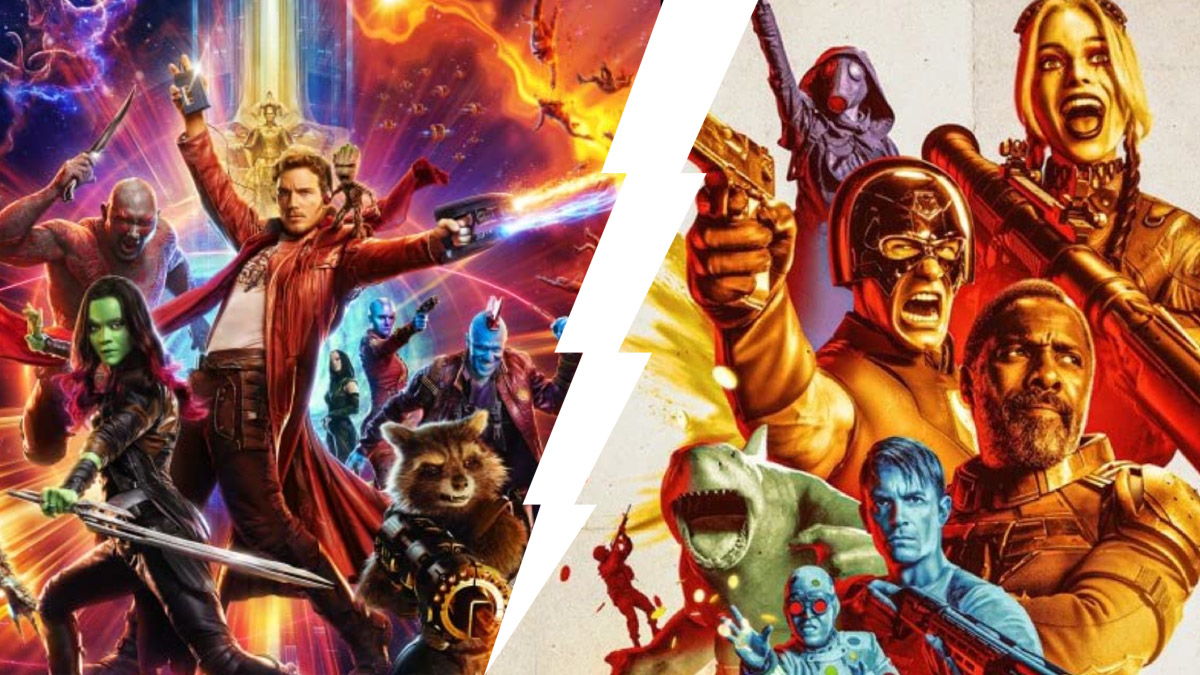 Who could have a problem with the Guardians of the Galaxy? The rogues and criminals were thrown together during a galactic crisis and formed a formidable team of space heroes. A genetically engineered talking raccoon, a walking tree, and the estranged daughter of the universe’s greatest threat are just some of the outcasts brought together under the leadership of Star-Lord Peter Quill. All of us, except probably Kevin Bacon, are better off with this Marvel superteam around.

Except, the Suicide Squad wants to have a word. Assembled by the ruthless Amanda Waller, the worst of the worst DC supervillains forced into forming an antiheroic superteam of their own. They may be reluctant, but they take the jobs that others won’t. Every member’s expendable, and some are distinctly underpowered compared to others. Still, the core team has an unmatched ability to survive whatever their opponents, and Waller, throw at them.

What the two teams indisputably have in common is writer-director James Gunn. He is in the unique position of having built superhero teams for the big two publishers of American comics. He assembled the MCU’s Guardians of the Galaxy from the line-up Dan Abnett and Andy Lanning put together for the comics in 2008. With a trilogy of Guardian movies completing in 2023 and almost certainly pushing their box office take to over $2 billion, there’s no doubt Gunn has made this line-up definitive.

The worst of the worst

That almost didn’t happen under Gunn’s direction after he was removed from the third film when some dubious old Tweets came to light. That would prove to be one of the pivotal moments in comic book cinema, as he jumped across to Marvel’s rivals DC, to not only helm a movie but (following a quick dip back into the MCU) take joint control of DC Studios. Across the park, Gunn built another team, picking up and reshaping the villainous superteam for The Suicide Squad.

Now, the new Co-CEO of DC Studios is hard at work forming not a super-team but a whole new cohesive DC Universe while signing off from the MCU after three movies and a Holiday Special.

Which begs the question, which of his two superteams is better? Or, to put it in the language of comic books that have brought us the likes of Avengers vs. X-Men, Justice League vs. Suicide Squad, and even DC vs. Marvel, which team would win in a fight?

The scene’s set for an irregular smackdown — the Guardians versus the Skwad.

Peter Quill, or as he prefers, Star-Lord, the hapless Earth-man with the weirdest wide-boy confidence the universe has ever seen, even before he found out he was part-Celestial. Squaring up across the rubble is Bloodsport, the reluctant squad leader with an unlimited capacity to swear at inanimate objects.

Bloodsport may not be the only supervillain with an incredible shot in the multiverse, but he’s the only one who has to constantly live up to having shot Superman. Quill might be lucky, but he’s no match for Bloodsport shot-for-shot, especially when the expert marksman discovers that Quill could have stopped Thanos.

We’re used to superheroes vs. supervillains as a clash of unstoppable forces against immovable objects, but this is a battle between two immovable objects. In any of his forms, Groot is quicker and more impulsive than King Shark. But while he’s a powerful and effective fighter, King Shark can take almost anything thrown at him.

King Shark could even get close enough to snap off some twigs with his gigantic jaw. He might get the better of the Flora colossus if he wasn’t so easily distracted by shiny fish or anything, well shiny, really. King Shark is a god in DC continuity, but Groot, as he always tells us, is Groot.

They are two of the sweetest members of their respective crews but also the two not to be underestimated. Both have proven themselves at the top end of their team’s arsenal. In a scrap, Mantis needs to hit the source and ensure Ratcatcher 2 doesn’t have a chance to use her power.

If R2 can scuttle away, she should edge it, quickly overwhelming Mantis, who — for all her fighting ability — won’t be able to manipulate each rodent quickly enough. Good thing they fought on a planet with rats.

Here are two team members capable of thinking outside and through the box. Although there’s no doubt Harley has the edge on de-lateral thinking to go with an exceptional ability to survive. Rocket is tenacious, but the bad news for him is Harley’s history of falling deeply in love with adorably violent critters — a smart-talking raccoon is a step up from a hyena. Rocket doesn’t stand a chance.

A literal fight, by which we mean both fighters take everything literally. After a tense war of words where the two literally misinterpret each other’s literalness, the pair’s devotion to necessary violence means a prolonged and bloody fight.

Wounds are shrugged off amid the constant commentary on each other’s moves until the Watchers nod off, and the Presence of the DC Universe and the One Above All of Marvel consider intervening for everybody’s sake. Ultimately, the balance of the universe proves once again that Peacemaker just edges ahead in unhinged bad luck. The Destroyer literally destroys the Peacemaker.

These two would be better off in counseling, but neither is likely to have much time for the other’s parental issues. The shadow of one mum versus the echo of the other’s dad would be a proper scrap.

For Nebula and Polkadot Man, it’s more a one-sided cat and mouse. PDM is typically unlucky when Nebula takes him out, but that’s probably what he hoped would happen.

Prosthetic Sean Gunn versus CGI Sean Gunn. It’s a hard call, but these two could manage to completely avoid each other in a fight. This pair is difficult to call. Weasel would stand a chance if he knew where he was.

Kraglin better hope he’s close to mastering the Yaka Arrow Controller like previous owner Yondu when facing a creature that always finds a way to survive. In the end, they’re as evenly matched as they are strangely similar.

The scrap of all scraps ends in a draw, although the Suicide Squad has nothing to lose, and they have a secret weapon. In the end, there was only ever going to be one game-changer: Amanda Waller.

A localized bomb to take out any of her troops is excellent, but one that can knock out the alien threat of the Guardians is more than a bonus.

As she might say, “in a world of flying men and monsters, this is the only way to protect our galaxy.”