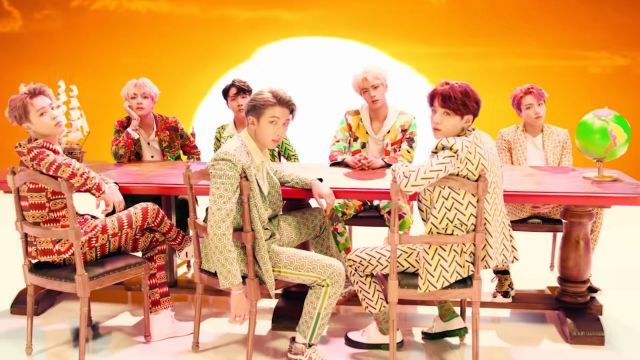 Throughout BTS‘s entire music career, the popular Kpop group have released multiple albums and EPs for their fans to enjoy. Something unique about their music is that you can slowly hear their development as a group and how far they’ve grown since their debut.

BTS has an extensive music discography comprised of nine studio albums, seven compilation albums, one soundtrack, eight EPs, two single albums, and two re-releases. Not to mention the number of singles that they’ve released in between. As BTS enters their indefinite hiatus period, with some of their members working on their solo careers, now is the perfect time to look back at all the albums they’ve released since 2013.

Here are all of BTS’s albums in order.

2 Cool 4 Skool was the debut single album released in 2013. This was back in the day when the group embraced the rap and R&B genre, with “No More Dream” being this album’s featured single. The music video for this track currently has over 263 million views on YouTube, while 2 Cool 4 Skool sold over 430,000 copies by January 2022.

After the success of O!RUL8,2?, BTS released their second EP Skool Luv Affair under the theme of young love and being in school. Their lead single for this EP was “Boy in Luv”, which had the boys act for the first time. Skool Luv Affair found success in the US as it peaked at number three on the Billboard World Album Charts.

Thanks to the success of Skool Luv Affair, BTS released a special edition of their EP, featuring brand new tracks such as “Miss Right” and “I Like it (Slow Jam Remix)”. This limited edition album had multiple re-releases due to the number of times it sold out whenever it came to market. By 2020, the album sold over 670,000 copies.

Speaking of worldwide success, 2 Cool 4 Skool / O!RUL8,2? is the first Japanese compilation album BTS released in 2014. Unlike their other Japan-exclusive albums, the songs featured were sung in Korean and didn’t have any Japanese versions.

After a year of releasing EPs, BTS finally released its first studio album. Dark & Wild was released on Aug 20, 2014, with “Danger” being their lead single. Dark & Wild focused on the group maturing and sold over 100,000 copies by the end of 2014. It even peaked at number three on the Billboard US World Album charts and number two on the South Korean music charts.

Wake Up is the first Japanese studio album released by BTS, where they sang Japanese for the first time as they re-recorded their best tracks for their Japanese fans. Wake Up sold over 28,000 copies and was labeled as BTS’s best-selling album in Japan during its release.

If you ask BTS fans how they got into the Kpop group, a majority would tell you that it’s due to their song “Dope”. The Most Beautiful Moment in Life, Pt. 1 was BTS’s third EP as part of their 2015 comeback. This was also the start when BTS shifted away from aggressive music styles and experimented with other sounds.

Following part one was the release of part two of The Most Beautiful Moment in Life on Nov. 2015. The fourth EP featured more toned-down songs such as “Butterfly”, “Run”, and “Autumn Leaves”, while also including some rap tracks that they were known for in the past. The EP peaked at number one on Billboard’s US World Album charts.

Youth is BTS’s second Japanese-language studio album, which featured songs from The Most Beautiful Moment in Life trilogy but re-recorded for a Japanese audience. The album sold over 44,000 copies on its first day and peaked at number one on Japan’s music charts.

Wings is BTS’s second studio album which was released on Oct 10, 2016. The album featured 15 new songs, with their lead single “Blood Sweat and Tears”. The album sold over 1.8 million physical copies worldwide. Wings was so successful that it led to the Kpop group being featured in Rolling Stone. Looking back, this album was the start of BTS’ music dominance in the Western music scene.

Due to the rising success that BTS had in 2016, the Kpop group released their first ‘best of’ album for both Korean and Japanese audiences. The Best of Bangtan Sonyeondan (AKA: The Best of BTS) is a compilation album that featured singles from their previous albums. The difference between the two versions is the language in which these songs were sung. Also, the Japan version didn’t feature any songs from the Wings album.

You Never Walk Alone is the continuation of the Wings album as part of BTS’s promotion for their upcoming world tour. The ‘repackaged’ album had two versions: ‘left’ and ‘right’. Both have the same tracklist, yet different cover art. You Never Walk Alone also featured a brand new track titled “Spring Day”, which currently has over 365 million streams on Spotify.

2017 was the start of the Love Yourself trilogy. Love Yourself: Her was the first part of this collection and the fifth EP BTS released. Their lead single was “DNA”, and the music video for the song became the first out of all of BTS’s releases at the time to reach one billion views on YouTube.

Face Yourself is BTS’s third Japanese studio album which featured Japanese versions of songs from Wings and Love Yourself: Her. This album also featured the new tracks ”Let Go”, “Crystal Snow”, and “Don’t Leave Me”, all sung in Japanese. By 2019, Face Yourself  sold over 500,000 copies.

Part two of the Love Yourself trilogy was the release of Love Yourself: Tear in May 2018. The second studio album won MTV’s album of the year for “transcending language and cultural barriers” as the album tackles the themes of love, innocence, doubt, and grief.

Love Yourself: Answer is BTS’s third compilation album and the final part of the Love Yourself trilogy. The album told the narrative of love and loss, similar to a nine-minute short film that the group released before Love Yourself: Tear titled Euphoria: Theme of LOVE YOURSELF 起 Wonder. The album received many accolades, such as Billboard’s “The 20 Best K-pop Albums of 2018: Critics’ Picks” and Yahoo’s “The best albums of 2018.”

After nearly a year of silence, BTS came back with a bang with their comeback trailer for their next album Map of the Soul. The group released the single “Persona” performed by RM. Map of the Soul: Persona is BTS’s sixth EP and sold over 3.2 million copies in a month. The EP debuted on the number one spot on Billboard’s US 200 music charts, a record that was held previously by The Beatles.

In 2019, BTS released a mobile game called BTS World, where players play the role of BTS’s manager in 2012. As part of the game’s launch, BTS released the official soundtrack of the game, containing songs that were featured such as “Dream Glow” featuring Charli XCX.

Map of the Soul: 7 – The Journey is BTS’ fourth Japanese studio album, featuring re-recorded songs from Map of the Soul: 7 in Japanese. The album also featured four new songs: “Intro: Callin”, “Outro: The Journey”, “Stay Gold”, and “Your Eyes Tell”. The album sold over 750,000 physical copies during its fourth week and was a certified triple platinum album by the Recording Industry Association of Japan.

In August 2020, BTS released their first English-sung song titled “Dynamite”, which is an amazing feat considering that RM is the only member that can speak English fluently. The song charted in multiple countries and was added to the Guinness World Record for seven categories such as ‘Most Viewed YouTube video in 24 hours’. Due to the song’s success, BTS released an EP that featured not only the song, but also the instrumental version and various remixes.

BE is BTS’s fifth Korean studio album, which was released during the COVID-19 pandemic. The songs were based on and inspired by the lockdowns and what it was like to be stuck at home. A prime example is their lead single “Life Goes On”, with the accompanying video portraying the members staying at home together. It was a perfect album that fit the overall mood that the world was in during those unprecedented times.

Similar to Dynamite, BTS created an EP centered on their second English-sung song “Butter”. The EP featured the song, its instrumental, and various remixes, and was streamed over a billion times on Spotify. “Butter” was considered to be an early contender for “Song of the Summer”, according to NME.

BTS, the best is BTS’s second Japanese compilation album released in 2021. The album featured songs from BTS’s previous Japanese studio albums, Face Yourself and Map of the Soul: 7 – The Journey, as well as a brand new song titled “Film Out”. The album sold over 800,000 copies and debuted at number one on Billboard Japan’s Hot album chart.

BTS re-released their Butter EP in 2021 after the success the song received. What makes this re-release different is that it only included two English-sung songs, “Butter”, “Permission to Dance”, and their instrumentals. No other remixes were found in this re-release as they only were distributed as singles.

Before BTS embarked on their hiatus, the group released Proof, their first anthology album which featured songs from 2013 to 2022. The album had 35 songs, three of which are new such as “Yet to Come (The Most Beautiful Moment)“. Proof sold over two million copies worldwide during its first day and was ranked number one in multiple countries, especially in Europe.